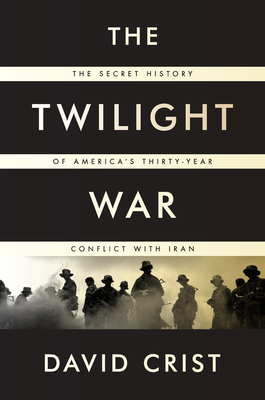 In The Twilight War: The Secret History of America’s Thirty-Year Conflict with Iran, written by former Marine Lt. Col. David Crist, many of my suspicions concerning Iran over a lengthy period of time have been validated. In this case, that’s not so good. Iran has been an enemy state for at least the last 30 years. They should have been dealt with long, long ago. As many of you know, I believe that WW III has already commenced with Iran, Russia, China and a whole host of other nefarious players who are siding off against Israel and the US. I’m not even so sure what side the US is on as long as Obama is at the helm.

From the TLC Book Tour:

This surreptitious war began with the Iranian revolution and simmers today inside Iraq and in the Persian Gulf. Fights rage in the shadows, between the CIA and its network of spies and Iran’s intelligence agency. Battles are fought at sea with Iranians in small speedboats attacking Western oil tankers. This conflict has frustrated five American presidents, divided administrations, and repeatedly threatened to bring the two nations into open warfare. It is a story of shocking miscalculations, bitter debates, hidden casualties, boldness, and betrayal.

A senior historian for the federal government with unparalleled access to senior officials and key documents of several U.S. administrations, Crist has spent more than ten years researching and writing The Twilight War, and he breaks new ground on virtually every page. Crist describes the series of secret negotiations between Iran and the United States after 9/11, culminating in Iran’s proposal for a grand bargain for peace-which the Bush administration turned down. He documents the clandestine counterattack Iran launched after America’s 2003 invasion of Iraq, in which thousands of soldiers disguised as reporters, tourists, pilgrims, and aid workers toiled to change the government in Baghdad and undercut American attempts to pacify the Iraqi insurgency. And he reveals in vivid detail for the first time a number of important stories of military and intelligence operations by both sides, both successes and failures, and their typically unexpected consequences.

I found The Twilight War riveting. It lays out in absolute detail what has happened between the US and Iran over the last 30 years. The good, the bad and the horrendous. David Crist was a senior historian for the federal government and an advisor to government officials on the Middle East — he has access to information that most of us could only dream of. Crist somewhat shares my pessimism on Iran and he is an excellent writer. Military runs in his family and I have a great deal of respect for him. He shares his adept insight and knowledge on Iran and the Middle East. Considering where we find ourselves today, I highly recommend this book to everyone out there. Where we differ is how I think we should deal with Iran. I’ve said many times it is a good thing I will never be President – if I were, Iran would no longer exist. There are good people there, but Iran will literally destroy the planet if left to continue on their merry nuclear way. They have to be stopped and that will involve violence, death, blood, tears and sadness. But Iran loves death while we love Pepsi. There is no good choice when your choices are cake or death. I do not agree with giving Iran the benefit of the doubt at all… every action towards diplomacy with them is a lie and they cannot be trusted. Period.

With his wealth of military experience, Crist takes you through his view of US policymaking and diplomacy. He also brings the battlefield alive in his narrative. He does not seem to have a true political bent which is another place we differ. The only true protection for the US is a conservative strong military presence and action. But as far as diplomacy goes, this book is tops in its field. He is a historian for the ages and he writes on a factual basis with clarity, competence and authority.

I would highly recommend this book to everyone. It gives you immense insight into how we got where we are today and has found its way into a worthy spot among my military and terrorism books. You will find it a great read.