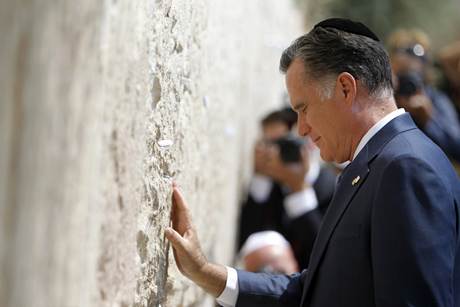 Mitt Romney’s speech in Jerusalem today was simply Reaganesque. I caught it by accident and could not tear myself away. It was like waking from a horrible 4-year long nightmare to find that the sun still shines on the city on the hill. It brought tears to my eyes and joy to my heart. This man will be the next president of the United States. He will have his work cut out for him… undoing all the evil that has been wrought. But he is a good and moral man – a man of God – and I believe he is up to the task. He certainly has a spine and he loves America, Israel and God. Which is way more than you can say for the current Marxist in the White House.

Romney spoke to the Jerusalem Foundation today in a speech that showed what true leadership looks like. He spoke with confidence and certainty. He did not equivocate. His delivery was measured and eloquent. He was, in a word, erudite. There was no hint of the careless arrogance and condescension so frequently seen and heard from our Elitist-In-Chief. Instead, Mitt was clarity and reality.

I mean, really, when have you ever heard Obama, at any podium anywhere, speak the words, “I love this country.”

His intent and words were so far removed from the tripe Obama pushes, it was staggering. In the opening statement alone, Romney makes it clear that Israel is God’s land and it is the fulfilled promise of a miracle, not a tragedy. He also made it very clear that Jerusalem is Israel’s capital.

Not only does Romney say that Jerusalem is the capital of Israel, he infers that the US Embassy should be moved there. From Yahoo! News via Atlas Shrugs:

JERUSALEM (AP) — Standing on Israeli soil, U.S. presidential candidate Mitt Romney on Sunday declared Jerusalem to be the capital of the Jewish state and said the United States has “a solemn duty and a moral imperative” to block Iran from achieving nuclear weapons capability.

“Make no mistake, the ayatollahs in Iran are testing our moral defenses. They want to know who will object and who will look the other way,” he said. “We will not look away nor will our country ever look away from our passion and commitment to Israel.”

The presidential election hovered over the speech. The Old City formed a made-for-television backdrop behind Romney, while some of his campaign donors listened in the audience.

Romney’s declaration that Jerusalem is Israel’s capital was matter-of-fact and in keeping with claims made by Israeli governments for decades, even though the United States, like other nations, maintains its embassy in Tel Aviv.

He did not say if he would order the embassy moved if he wins the White House, but strongly suggested so in a CNN interview.

“My understanding is the policy of our nation has been a desire to move our embassy ultimately to the capital (Jerusalem),” he said, adding, “I would only want to do so and to select the timing in accordance with the government of Israel.”

His remarks on the subject during his speech drew a standing ovation from his audience, which included Sheldon Adelson, the American businessman who has said he will donate millions to help elect Romney to the White House.

Romney’s embrace of Israel was on display earlier in the day when he met with Prime Minister Benyamin Netanyahu and other leaders. He also visited the Western Wall, Judaism’s holiest site, where he was mobbed by worshipers.

“We recognize Israel’s right to defend itself,” he told the audience. Earlier, the aide, Dan Senor, previewed the speech for reporters, saying that “if Israel has to take action on its own, in order to stop Iran from developing the capability, the governor would respect that decision.”

In his speech, Romney said Syrian President Bashar Assad “desperately clings to power” in Damascus in the face of an attempted overthrow, but he did not call for his removal.

He noted that Egypt is now headed by an “Islamist president, chosen in a Democratic election. … The international community must use its considerable influence to insure that the new government honors the peace agreement with Israel that was signed by the government of Anwar Sadat” more than three decades ago, he said.

A goal of Romney’s overseas trip is to demonstrate his confidence on the world stage, but his stop in Israel also was designed to appeal to evangelical voters at home and to cut into Obama’s support among Jewish voters and donors. A Gallup survey of Jewish voters released Friday showed Obama with a 68-25 edge over Romney.

Romney and other Republicans have said Obama is insufficiently supportive of Israel, noting statements the president has made about settlements and his handling of evident Iranian attempt to develop nuclear weapons.

Tehran is closer to developing nuclear weapons capability than before, Romney said. “Preventing that outcome must be our highest national security priority.”

In a March speech before a pro-Israel lobby in Washington, Obama warned of “loose talk of war” that serves only to drive up oil prices. “Now is not the time to bluster,” he said then. “Now is the time to let our increased pressure sink in and sustain the broad international coalition we have built.”
[…]

Even so, Israeli Prime Minister Benjamin Netanyahu said before the speech that “all the sanctions and diplomacy so far have not set back the Iranian program by one iota.”

Iran and every other radical Islamist theocrat, especially the Muslim Brotherhood, have been put on notice. Our next president wants them at the top of his dance card. Cha, cha, cha! I adore the fact that Romney and Netanyahu have been buds since the early 70s. You are known by your friends, isn’t that right Comrade Obama? And you are equally known by your enemies.

In a hit deep into the bleacher seats that will leave an eternal mark, Romney took solid aim at Obama by pointing out what Israel has built:

We both believe that our rights are universal, granted not by government but by our Creator.

We both believe in free enterprise, because it is the only economic system that has lifted people from poverty, created a large and enduring middle class, and inaugurated incomparable achievements and human flourishing.

As someone who has spent most of his life in business, I am particularly impressed with Israel’s cutting edge technologies and thriving economy. We recognize yours as the “start-up nation” – and the evidence is all around us.

You have embraced economic liberty. You export technology, not tyranny or terrorism. And today, your innovators and entrepreneurs have made the desert bloom and have made for a better world. The citizens of our countries are fortunate to share in the rewards of economic freedom and in the creativity of our entrepreneurs. What you have built here, with your own hands, is a tribute to your people, and a model for others.

Clarity. No equivocation. No suggestion that some vague bureaucracy made it all possible. Rights from God, not government. And who built it? “[Y]ou … with your own hands.”

Daniel Pipes highlights the many statements of Romney that are paeans to the Jewish state and its extraordinary ties to the United States:

At the end of the speech, Romney asked that God bless Israel as well as America. May it be so always. When was the last time that we heard a leader ask for a blessing on another country besides his own? It’s been a long time. America is turning back to God and it will be our salvation. Greatness is not found on a podium or in a spotlight, but on your knees in prayer.