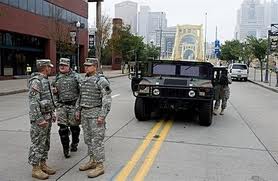 Retired Col. Kevin Benson is teaching United States soldiers at the University of Foreign Military and Cultural Studies at Fort Leavenworth, Kansas that the enemy that will be met in the streets here on our soil are extremist Tea Party insurrectionists according to an article by Anthony Martin which appeared on the Examiner website. The title, Army colonel ignites firestorm with article on crushing a ‘tea party insurgency’, illustrates the mindset of some in our government and could easily be compared to that of pre-World War Two Germany.

The pattern has been used before; quite effectively I might add, to label any portion of society which may be a threat to the powers that be; to label them as extremists, a danger to the average everyday citizen.

After a year or so of hearing over and over again that Jews were a danger to the stability of Germany, nobody said much when the Jew’s businesses were trashed or their homes taken away. Then came the “night of the long knives,” when all undesirables were summarily executed or rounded up to be carted off. Nobody wanted to know what had happened in the shadows, a sorry excuse for the rule of law; most were simply glad the troublemakers were gone and everyone could be happy again.

The drive-by media is branding the Tea Party movement as troublemakers every chance they get, doing so in concert with the progressives in the Obama administration and Homeland Security. Now some top leaders in the military have joined in directing insulting language toward conservative members of society who will stand up against tyranny.

Back in January of this year the Department of Homeland Security finalized its study on how to deal with home grown terrorist groups which included the following (on page 9 of that report):

“Extreme Right-Wing: groups that believe that one’s personal and/or national “way of life” is under attack and is either already lost or that the threat is imminent (for some the threat is from a specific ethnic, racial, or religious group), and believe in the need to be prepared for an attack either by participating in paramilitary preparations and training or survivalism. Groups may also be fiercely nationalistic (as opposed to universal and international in orientation), anti-global, suspicious of centralized federal authority, reverent of individual liberty, and believe in conspiracy theories that involve grave threat to national sovereignty and/or personal liberty.”

“…DHS went to work to downplay the danger and significance of radicalized Islam and to highlight the supposed dangers posed by “homegrown, right wing terrorists” who are characterized by an extreme adherence to conservative Christianity and the belief that the Constitution is the final rule of law in America, small and limited government is the ideal insisted upon by the Framers, and big government poses an ever growing threat to individual freedom.”

In other words, the Tea Party movement which represents conservative values is considered more of a threat to America than Islamic extremists who have pledged to destroy all western civilization.

I remember seeing the mountains of trash left behind after the coronation of Obama as America’s Emperor, his adoring public leaving soiled diapers, sandwich wrappers and empty drinking cups scattered to such an extent as to make it appear like a band of vandals had attacked our nation’s capital. Folks from the Tea Party movement gathered in Washington D.C. to express concerns about how poorly our representatives in Washington were handling the economy and basic constitutional principles. The Tea Party standing up to poor leadership in Washington may have been the most civilized gathering to ever have happened in the history of that great city.

Unlike the Occupy Movement which destroyed almost everything they touched in cities they laid siege to, there were no Tea Party rapes, no Tea Party murders and no Tea Party fist fights within the huge crowds which represented conservative traditional family values; with perhaps the exception of some SEIU thugs who assaulted some innocent folks. Heck, there wasn’t even trash to pick up after they left since members of the Tea party movement love their country so much they pick up after themselves.

The news media has been working its lies and propaganda for quite some time now. Every opportunity is used to brand conservative minded folks as extremists. Moments after the shooting which left 6 people dead and Representative Gabby Giffords gravely injured, members of the media reported it had been the result of some right wing extremist or Tea Party member. No evidence was available to back up such a statement; but the lie had to be spread so that as many folks would hear the lie and react unfavorably towards anyone holding conservative opinions.

The same propaganda style reporting happened recently after the shooting rampage in Aurora, Colorado; it must have been an extremist member of the Tea Party movement, someone who has been training with a survivalist group. It doesn’t matter if the facts don’t match with the reporting; the public must hear it over and over again how dangerous the conservatives are, those who cling to religion and guns, extremists who gravitate to the Tea Party movement, home grown terrorists who need to be carefully scrutinized.

Now we have a retired U.S. Army colonel teaching our troops to prepare for military exercises under the presumption they will be facing home grown terrorists, extremists who are Tea Party insurrectionists willing to go to war on our own soil. I can only hope there is a voice of reason somewhere in our military, a voice which counters this bombardment of insanity and innuendo directed toward patriotic Americans. Maybe we can get the Oath Keepers to address these same military personnel, undo some of the damage done by a reckless hate monger like Retired Col. Kevin Benson and remind them of their constitutional responsibilities. Our troops defend and support the Constitution, not the party in power.

I have a question, when has the current administration scheduled our “night of the long knives?” Some believe it will come about if the elections in November don’t return Obama for a second term, that riots have been planned in advance in order to create the perfect “crisis” which would require military action. Watch your back; treachery and history go hand in hand; but I’m just speaking as a Tea Party insurrectionist.

One thought on “Tea Party Insurrectionists”