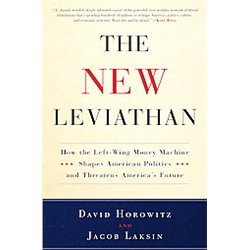 As a nation mired in the political melodrama of the 2012 presidential election, we are once again subjected to a deluge of acrimonious debates on issues that threaten to tear our country asunder. Class polarization; the eternal struggle of rich versus poor, capitalism versus socialism, government hand outs or good ol’ American ingenuity and hard work are the ubiquitous buzz words of the day. If the acquisition of massive wealth and its distribution are the centerpiece of shaping a national political agenda, then who precisely is controlling the proverbial purse strings?

In this latest meticulously researched monograph entitled, “The New Leviathan,” David Horowitz and co-author Jacob Laksin have a litany of surprises in store for us, as they scrupulously debunk the pervasive canards that have been fed to us by the liberal dominated media as it pertains to which political party represents the “people” and which signifies “power.” Many of us have bought into what the authors tell us is “the conventional view, that it is Republicans and the political right with their corporate sponsors and big-money donors who make up the “party of the rich” while progressives speak for the powerless and the poor.” Deftly disproving this erroneous notion, the facts presented in this book tell a very different story, as they point to the sheer hypocrisy of those who are hell bent on eradicating capitalism while simultaneously enjoying the fiscal privileges and power that this system generates.

According to Mr. Horowitz, a former Marxist turned true blue Conservative, who was once a major player in the vanguard of the radical left in the 1960s, it is government unions such as the SEIU (Service Employees International Union), AFSCME, the American Federation of Teachers, among others of that ilk, who share a broad relationship with the burgeoning array of billion-dollar tax-exempt philanthropic and educational foundations and well-funded advocacy think-tanks that have been hijacked by the radical left.

Case in point: At one time the political proclivities of such foundations as the Pew Charitable Trusts, the Rockefeller Foundation, the Ford Foundation, the Kellogg Foundation, the Heinz Foundation, the Carnegie Foundation, the John D. and Catherine T. MacArthur Foundation and even the AARP were decidedly conservative in following with the beliefs of their founders. When Henry Ford and John Rockefeller left this world, it was their descendants who served as the catalyst for the establishment of a radicalism that was hitherto unknown.

The authors inform us that Steven Rockefeller, son of former vice-president Nelson Rockefeller, is a lifelong socialist who along with former Soviet premier Mikhail Gorbachev, drafted the “Earth Charter,” an anti-capitalist manifesto that reviles capitalism for the world’s social, economic and environmental ills. Today, the Rockefeller Foundation underwrites such patently left-leaning organizations as ACORN, the Institute for Policy Studies and the World Social Forum.

Referring to the marriage of labor unions and the progressive left as a “Shadow Party” with billionaire George Soros at the helm, Mr. Horowitz draws stark contrasts as he informs us that the total assets of such conservative foundations as Bradley, Olin and Scaife do not exceed a billion dollars, while the 115 major tax-exempt foundations of the Left have a combined $104 billion in tax-exempt assets, more than 10 times the amount held by their largest 75 conservative counterparts. With such seemingly limitless funding at hand, the authors make it abundantly clear that through surreptitious methods, the left’s ability to insinuate its agenda into the national conversation has been exceedingly successful.

The authors conclude that the war chest of the left has been a pivotal factor and bridge to a socialist agenda and, thus, cites the universal health-care bill that was pushed through Congress in 2009, despite overwhelming public disapproval. Horowitz and Laksin also identify 117 progressive groups that have championed the issue of looser immigration policies, and the findings presented indicate that they have 22 times the funding of the nine conservative groups that extol the opposite position on immigration reform. We also learn that there are 553 liberal groups against 32 conservative ones on the environmental issue and the left has 462 times the funding of the right. A broad range of liberal groups thrive not because they have significant popular support, but because their big-donor funding stream is so massive and reliable.

If this were not ample proof of a nascent socialism, the authors also point to the feverish lobbying and political strong arm tactics of government unions that have shaped policy to the extent that federal employees receive an average of $123,049 in annual pay and benefits — twice the average for private-sector workers

Leaving no stone unturned, this book unabashedly confronts President Obama’s ties to such radical left-wing personalities as community organizer Saul Alinsky, 1960s member of the Weather Underground, Bill Ayers, and the organizations that emerged as a result of their efforts. Despite the fact that the liberal media played a key and consistent role in getting Barack Obama elected to the nation’s highest office in 2008, the authors tell us that the path to Obama’s presidency was paved by such acknowledged radical left associations as the Developing Communities Project, the Campaign for Human Development, ACORN, the United Neighborhood Organization, and the Midwest Academy, to name just a few.

What really drives home the gravitas of the current quagmire is the last third of “The New Leviathan.” This section is dedicated to presenting a series of appendices and tables that list foundations by assets and activist groups by budgets. Prepared from the reports filed with the Internal Revenue Service, the databases list the comparative monetary power of “progressive” organizations versus conservative ones and the revelations are beyond shocking.

“The New Leviathan” is an exceptionally important book and an essential read for anyone who sincerely wishes to gain a grasp on who is the real architect of our social and political agenda. Despite the incessant flow of calumnies that pass as truth in the media, this book enlightens us to the panoply of subterfuges that are slowly and insidiously chipping away at American values.

Shooter had 15 CHICK-FIL-A sandwiches in backpack…

Charged with assault, intent to kill…