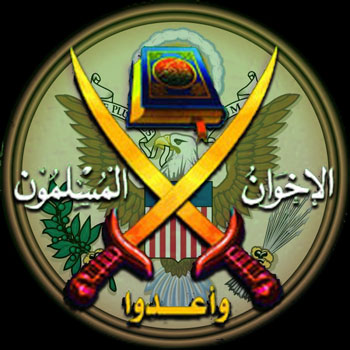 The Muslim Brotherhood, radical Islam and Iran are slouching towards the borders of Israel and are vowing to wipe her from the face of the earth. When psychotic, murdering tyrants speak, the world should listen. Iran is openly calling for a military alliance among Islamic nations to wage war against Israel. Even countries who have long stood against Iran and its apocalyptic intentions are now beginning to join hands and beat the war drums for the end of days.

All of this horrific vision can be laid solidly at the feet of the Marxist in the White House who keeps faith with his Muslim roots and has brought the Muslim Brotherhood into our hallowed halls in Washington and has surrounded himself with infiltrators from the Brotherhood. Barack Obama has done nothing of note in foreign affairs except to welcome terrorists to American soil and pay homage to Islamic nations that desire our demise. It does not take a nuclear scientist to do the math here.

First Obama intruded into Libya where the Brotherhood is now in control. Then Egypt and next, Syria. All are now under the shadow of Shariah law and the full-throttled domination of Islam. This week Egypt began a full blown dive into tyranny. The media has systematically been crushed because they took a stance against Morsi:

Barely two months after taking power, the Muslim Brotherhood has wasted no time in swiftly taking Egypt down the road to a totalitarian state. Its latest target is Al-Dustour, a Christian-owned newspaper, which had condemned President Morsi’s ties to Hamas as a threat to Egyptian national security. Al-Dustour was accused of sedition and stirring up sectarian discord—the latter is code for insulting Islam. Most dangerously, Al-Dustour implied that the Rafah attack had been backed by Morsi’s own Hamas allies to enable him to crack down on the domestic opposition.

Al-Dustour is not the first newspaper to be targeted by the Muslim Brotherhood. The Brotherhood has already used its parliamentary position to name dozens of new editors for Egypt’s major state-owned newspapers, including Al-Ahram. Akhbar Al-Youm, the second-largest newspaper in Egypt, will be run by a descendant of Muslim Brotherhood founder Hassan al-Bana.

In response to the Islamist hijacking of the Egyptian press, many reporters have spoken out against the move and some have even gone on strike. But the Muslim Brotherhood’s assault on Al-Dustour is a warning that the days of independent newspapers opposed to the regime are numbered. Both Obama and the Muslim Brotherhood have suggested Islamist Turkey as the model for the new Egypt. Now the Muslim Brotherhood is imitating Erdogan’s crackdown on the military as well as his totalitarian control over the Turkish press.

Morsi’s goons have done the same thing to television networks in Egypt. Next on Morsi’s hit parade is the military, which is being ‘sanitized’ of those that object to Morsi and the Brotherhood. All the while, ratcheting up the rhetoric against Israel while bonding with the Mullahs in Iran. Obama’s work in Egypt is almost complete – welcome to Egypt’s totalitarian dictatorhip:

And what do you do to infidels that stand against you? Choices, choices… There’s always the classics of shooting them, hanging them, stoning them or beheading them. But one of the most violent executions and the most favored for Christians and Muslims who don’t fall in line is crucifixion. That’s right. The barbaric, monstrous practice of nailing someone to a cross and letting them hang until dead. That is Shariah law. That is what Barack Obama has gifted citizens of the Middle East with – torture right out of the dark ages.

The Arab Spring takeover of Egypt by the Muslim Brotherhood has run amok, with reports from several different media agencies that the radical Muslims have begun crucifying opponents of newly installed President Mohammed Morsi.

Middle East media confirm that during a recent rampage, Muslim Brotherhood operatives “crucified those opposing Egyptian President Muhammad Morsi naked on trees in front of the presidential palace while abusing others.”

Raymond Ibrahim, a fellow with the Middle East Forum and the Investigative Project on Terrorism, said the crucifixions are the product of who the Middle Eastern media call “partisans.”

Ibrahim also says the victims can be anyone, including Egyptian Christians.

“It’s anyone who is resisting the new government,” Ibrahim said. “In this particular case, the people attacked and crucified were secular protesters upset because of Morsi’s hostile campaign against the media, especially of Tawfik Okasha, who was constantly exposing him on his station, until Morsi shut him down.”

There are stories of the Muslim Brotherhood crucifying Christian children in Africa and elsewhere. Still think it’s the religion of peace? More like ‘pieces’ and thoroughly evil. There I said it. I cannot take it any longer – the Quran is the polar opposite of the Bible and, in my viewpoint, pure, unadulterated evil. The religion is irretrievably broken and those that are good that follow it are seriously misled.

Pamela Geller of Atlas Shrugs and Clare Lopez of the Center for Security Policy and a host of others are now calling for Coptic Christians to get out of Egypt and fast:

“Crucifixion is a hadd punishment, stipulated in the Quran, Sura 5:33, and therefore an obligatory part of Shariah,” Lopez said. “It’s been a traditional punishment within Islam since the beginning, even though it’s not exclusively Islamic. The Romans used it too.

“So, the Egyptian Muslim Brotherhood haven’t the option to not include crucifixion within their legal code. It’s obligatory to comply with Shariah. And yes, it’s for shock value also to be sure,” Lopez said.

Lopez includes a warning for Egypt’s Christians and compares the coming treatment of the Christians to the Jews in Germany.

“The Copts must get out of Egypt as soon as possible – for the many millions who will not be able to get out, I expect things will continue to deteriorate – just as they did for Germany’s and Europe’s Jews from the 1930s onward,” Lopez said.

“The warnings were there long before the ghettos and round-ups and one-way train trips to the concentration camps began in the 1940s,” she said.

And Morsi, the beast who is slaughtering and torturing with glee, is invited to the White House in September. Not a peep from Obama on this brutal coup, but open arms for the treacherous Muslim Brotherhood. Just think what Obama could accomplish in America in another four years. Islam could all but conquer us from within with the help of our President. Shariah is already spreading in the US and in our courts. Islamic violence is spreading here too as can be seen in the rape of a woman in Colorado by five Iraqi Muslims who were ‘unhappy’ with the way they are treated here. Gee, go figure… Honor killings are also on the rise in the states.

Emboldened by Obama’s and Iran’s support, Egypt is now getting ready to violate the peace treaty with Israel. Heavy artillery and military is being moved to the border with Israel and you can bet it’s not for show. Morsi is also on his way to Iran this month to cuddle with the Mullah’s and plot death and destruction for Israel. I’m sure that the resurgence of a worldwide caliphate is also on the menu.

Israel is surrounded by enemies. This week alone, take a look at the headlines:

This week Israel also warned of the very real possibility of a 30 day war with Iran. Here that ticking? That is World War III ramping up. Israel isn’t the only one on the death list – in fact, they are number two right after America. Nuclear war anyone? How about an EMP?

This next election is life and death for America on so many levels. Michele Bachmann and a few others are exposing the Brotherhood and their incestuous relationship with Obama. But we have Democrats and Republicans alike (both Progressives), who are doing their best to throw them under the bus, vilify and discredit them when they should be lauded for their patriotism and bravery. Romney and Ryan both recognize the existential threat of Iran and vow that there will be no daylight between America and her allies under a Romney presidency:

Presidential challenger Mitt Romney is leading a Republican charge to prompt the Obama administration to take decisive action against Iran following leader Mahmoud Ahmedinejad “outrageous” claim that Israel is an “insult to humankind.”

The time now has come for the United States to “lead the world in stopping Iran’s genocidal regime from obtaining a nuclear weapons capability,” said Romney in comments reported by the Jerusalem Post.

“Ahmadinejad’s latest outrageous remarks are just another reminder of what is at stake,” Romney said. “As I said recently when visiting Jerusalem, ‘We have seen the horrors of history. We will not stand by. We will not watch them play out again.’ ”

So, in summary, Obama’s administration, citing “democratic overthrow of a dictatorship” backed the “Arab Spring” to oust a regime that kept an extended truce with Israel, only to replace it with … a “new, improved” dictatorship that visits horrors upon its own population and, just for bonus points, also plans to annihilate that pesky Israel. And we’re all surprised. Yes we are. And shocked, too.

FULL SPEECH: Paul Ryan talks about Medicare at the Villages

Paul Ryan at The Villages, Florida: Obama Raids Medicare to Pay for ObamaCare; “Medicare should not be used as a Piggy-Bank for ObamaCare”; Raises Specter of “15 Unelected Bureaucrats” Limiting Seniors’ Access to Care under ObamaCare – Video 8/18/12

Intelligence and Special Operations forces are furious and frustrated at how President Obama and those in positions of authority have exploited their service for political advantage. Countless leaks, interviews and decisions by the Obama Administration and other government officials have undermined the success of our Intelligence and Special Operations forces and put future missions and personnel at risk.

The unwarranted and dangerous public disclosure of Special Forces Operations is so serious — that for the first time ever — former operators have agreed to risk their reputations and go ‘on the record’ in a special documentary titled “Dishonorable Disclosures.” Its goal is to educate America about serious breaches of security and prevent them from ever happening again.

Use of military ranks, titles & photographs in uniform does not imply endorsement of the Dept of the Army or the Department of Defense. All individuals are no longer in active service with any federal agency or military service.

Read more at The LA Times…