Read more at The Gateway Pundit…

By: James Simpson
Right Side News

AB Independent Productions, in collaboration with Veteran investigative journalist Cliff Kincaid of America’s Survival, has released a new video that reveals in detail for the first time, the story of how communist and probable Soviet agent Frank Marshall Davis – arguably the most influential person in Obama’s life – was discovered, and how the national media attempted to cover this story up.

“Four years after we broke the story wide open with the release of a 600-page FBI file on Barack Obama’s communist mentor, we are still finding major elements of the media with their heads in the sand,” Kincaid said.

Davis was first exposed by noted researcher Trevor Loudon of NewZeal blog back in March 2007, a mere month after Obama announced his candidacy for president. As is usually the case, Trevor’s source for this revelation was the communists themselves. Trevor quotes Communist Party USA member Gerald Horne who wrote in the CPUSA’s journal, Political Affairs, that Davis:

…spent a good deal of his adult life in Chicago, before decamping to Honolulu in 1948 at the suggestion of his good friend Paul Robeson (Ed: Robeson was staunch Stalinist).

Eventually, he befriended another family – a Euro-American family – that had migrated to Honolulu from Kansas and a young woman from this family eventually had a child with a young student from Kenya East Africa who goes by the name of Barack Obama, who retracing the steps of Davis eventually decamped to Chicago.

Realizing this was a potentially explosive story, Kincaid sought to confirm it through independent sources.

In the video, Kincaid quotes more of Horne’s revelations, including the following prophetic statement:

At some point in the future, a teacher will add to her syllabus, Barack’s memoir, and instruct her students to read it alongside Frank Marshall Davis’s equally affecting memoir, Livin’ the Blues. And when that day comes, I’m sure a future student will not only examine critically the Frankenstein monsters that U.S. imperialism created in order to subdue communist parties, but will also be moved to come to this historic and wonderful archive, [referring to the communist party archive] in order to gain insight on what has befallen this complex and breathing planet on which we reside.

Did Horne know back in March 2007 that Obama would be the next president? Seeking further verification, Kincaid located University of Hawaii professor, Kathryn Takara, who had written her dissertation about Davis. She confirmed via phone that Obama’s “Frank” was indeed Frank Marshall Davis and that they had a significant relationship.

Kincaid obtained Davis’s 601 page FBI file in August of 2008. It revealed that Davis was not only a high level communist party member (CPUSA # 47544), but very likely an active Soviet agent. He was under FBI surveillance for 19 years and was placed on the Bureau’s “Security Index.” This list identified people considered dangerous enough to be summarily arrested in case of war with the Soviet Union.

Author and historian Paul Kengor details many of Davis’s subversive activities in his book “The Communist.” He discussed his evidence that Davis was a Soviet propaganda agent at a recent Kincaid press conference, The Vetting: Obama, Radical Islam and the Soros Connection. According to Kengor:

Hawaii was not yet a state when Davis first relocated there in 1948. It had significant strategic importance and was thus the focal point of intense interest from the Soviets. Not coincidentally, it was swarming with communists. For example, Kincaid has uncovered a 1949 Saturday Evening Post article which described a 177 day-long communist inspired strike of the International Longshoremen’s and Warehousemen’s Union (ILWU). At the time, Davis was editor of the ILWU newspaper, the Honolulu Record. According to Kengor, this was a job created especially for Davis before he even arrived.

A disaffected former communist ILWU member provided much of the information for the Post article. He said the strike was launched in an attempt by the Communist Party to take over the island. If successful, it would have pulled Hawaii into the Soviet orbit.

Nothing to see here; move along now. 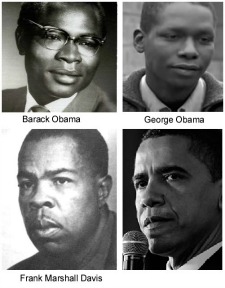 At the same conference, movie producer Joel Gilbert exposed Davis’s seedy side in his new film, “Dreams from My Real Father – A Story of Reds and Deception.” He revealed that Obama’s mother, Stanley Ann Dunham, posed nude for a series of photographs taken by Davis, and was one month pregnant with Obama at the time. Gilbert’s thesis is that the child carried by Dunham was in fact Davis’s son. The evidence Gilbert presented in this film makes a very strong case for his thesis. It also provides a compelling explanation for Obama’s obsession with hiding his birth certificate, and the document’s riddle of inconsistencies discovered by Sheriff Joe Arpaio’s cold case posse.

In 2008, Kincaid sought to get this story exposed in major media but they ignored it, calling Kincaid’s efforts to expose the truth “McCarthyism.” Later, when the story got too big to dismiss, the media glorified Davis and ignored or downplayed his communist past:

A Washington Post reporter attended one of Kincaid’s conferences, calling it “a UFO convention.”

Even the Drudge Report refused to run Kincaid’s ads about Davis as “too controversial.”

Joel Gilbert publicly lambasted print and broadcast media, including some conservative media, for suppressing information about Obama. In promoting his “Dreams” film, Gilbert related how Talking Points Memo (TPM Muckraker) requested a review copy, illegally edited it and posted parts of the edited version on Youtube. TPM then informed the public “now they don’t need to buy the film.” Gilbert said that even Newsmax pulled his advertisements at the last minute, claiming to want to “move to the center.”

Gilbert’s reflections on the media are fitting here, because he spells out the danger:

All evidence indicates that Barack Obama was raised and indoctrinated by Frank Marshall Davis, Communist Party propagandist, during his formative years. And all evidence indicates that Barack Obama, his entire life, pursued the dreams from his real father. And what are those dreams? They are the dreams of a forced imposition of a classic Stalinist/Marxist agenda upon America at home and abroad. And what is the history of Marxism? …Marxism leads to economic ruin and the biological destruction of populations and societies…

American journalists have a key role to play in revealing the truth, and they must do so immediately, without further delay.

Would Obama have been elected in 2008 had Americans known the full story? Almost certainly not. The national media organs have actively suppressed this major story. If you don’t read Accuracy in Media, Breitbart, Right Side News, American Thinker, or one of the other conservative sites, it is likely you have never even heard of Frank Marshall Davis. This information needs to become common knowledge for voters prior to the 2012 election. It simply must get around. 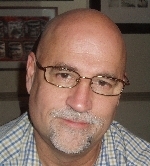 James Simpson is a businessman, media consultant and investigative journalist. His articles have been published at American Thinker, Accuracy in Media, Breitbart, Washington Times, WorldNetDaily, and others. His regular column is DC Independent Examiner. Follow Jim on Twitter & Facebook.