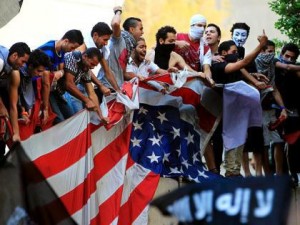 We keep hearing about the need to be tolerant of our Muslim associations; just because they have a different religion we shouldn’t consider them a threat to our way of life. Our president has invited these barbarians as guests into the White House, wined and dined them as a gesture of friendship. Obama even gave the Muslim Brotherhood a billion and a half dollars; just a helping hand to our closest friends.

“In his Wednesday CFP report, Hagmann, who described the “Origins of the Freedom and Justice Party (FJP) as having been founded in Egypt on 30 April, 2011 by the Muslim Brotherhood, “which is the ideological forefather of al Qaeda and Hamas, supporter of Sharia Law, and an advocate of terrorism against Israel and the West”, named names:

“Abdul Mawgoud Dardery, a VIP of the delegation hosted at the U.S. Chamber of Commerce, is an outspoken proponent of Sharia law over democracy and openly critical of American business influences in Egypt.”

After our embassy in Libya was besieged, Ambassador Stephens murdered and his body dragged through the street as a symbol of victory over the American infidels who dared to let one of their citizens post a video on YouTube, one which portrayed Islam in a less than favorable light; Obama, representing America, apologized to this band of murderers. 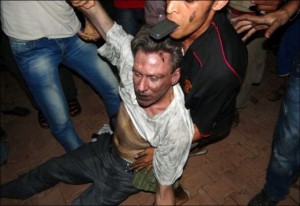 I read a report on Powerline by John Hinderaker, in which a medical doctor at a Libyan hospital claimed Ambassador Stephens died of smoke inhalation. Stephens’ car was set on fire and burned violently while he was attempting to help others escape the onslaught; however, this report may be a fabrication. He appeared to have been beaten and may have died some other way; trusting your enemies to be truthful isn’t the smartest thing to do. (Just thought I’d mention that to anyone in the White House who might be paying attention.)

Byron York writing for the Washington Examiner covered Mitt Romney’s remarks on the situation of our embassy being taken over and our countrymen killed. Why would our president express sympathy for murdering thugs who are intolerant of America, so intolerant they have promised to eradicate us?

“…Romney was, and is, right. As events in Benghazi and Cairo unfolded, the Obama administration’s first instinct was to apologize for any offense Muslims might have taken from an Internet video, made in America, that mocked and ridiculed the prophet Mohammed, and which the radicals cited as the cause for their actions. In his original statement last night, Romney said, “It’s disgraceful that the Obama administration’s first response was not to condemn attacks on our diplomatic missions, but to sympathize with those who waged the attacks.” Then, on Wednesday morning, Romney said the administration “was wrong to stand by a statement sympathizing with those who had breached our embassy in Egypt instead of condemning their actions.”’

I’m waiting for Obama to offer up the State of Arizona as a token of our unwavering commitment to suck up to Islam and the Brotherhood. That would solve issues Obama’s administration has with immigration laws that protect U.S. citizens; let the wetbacks try and cross the border into Arizona and see how well they’re received by a bunch of raving lunatics carrying Russian made fully automatic weapons. I bet there’s no way to say “allah akbar” in Spanish; it would come out sounding like a side order to go with enchiladas.

Shifting gears… and perhaps planets; the fellow who promised to repair my mantle clock wasn’t at his shop this morning when I went to drop it off. I’d met him several months ago when he’d lost the only working key for his vehicle. We got to talking about my broken clock and he said he could probably repair it for less than two hundred dollars; just drop it off and let him have a look.

When he answered the phone I jogged his memory and I told him the brand of clock and what was wrong, “Well, it’s been ‘almost Seven’ going on three years now”; that’s where the hands stopped when something inside went “sproing”!

He laughed and told me to leave it in his garage, “Just open the door and find a flat spot near my old Model A Ford. Be careful, that garage door is tricky and might come down on you”.

We talked about how much it would cost and that I wanted the job done before Lucy got home from her trip, a surprise sort of thing. The bill would be paid up front in cash and I would find a place inside the clock to deposit the money.

“Just leave a hundred and seventy or a hundred and eighty, which ever is easier.” I had to laugh at the option offered; nobody lets the customer determine the price, do they?

I told him, “A hundred and twenty would be much easier” and we both laughed at the bargain I was making for myself at his expense; I left an appropriate amount stuffed under the little thingies that make the chimes work. He’ll have the clock fixed in a couple of days and give me a call to pick it up well before Lucy gets home.

My guess is there aren’t any clock repair shops like that in Libya, people who will do business in a reasonable fashion and where civilized folks can have fun like that. If there were they’d have been burnt to the ground by now, their owners hanging from a flag pole with a sign warning infidels to stay the hell out. Doing business with reasonable people is so much nicer; down right hard to find a reasonable person these days.