Leading from his behind 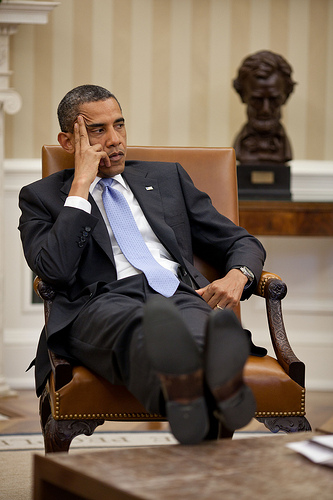 The reasons for the current Middle East destruction of US Embassies in multiple countries–now increasing every day–falls at the feet of Barack Hussein Obama. Not only has Obama shown extreme and unconscionable weakness with his and his syndicate’s continuing apologies for the USA’s existence (to every Middle Eastern Islamic country worldwide) but, he is now refusing to pay any attention to (and ignores) his daily Intel briefings.

Even after the explosions, destruction of our embassies and the sodomizing and assassination of at least one of the 4 murdered-by-Muslims staff members in Libya, Obama is reported to still be refusing to read and discuss any new Intel reports. Instead, he chooses to continue campaigning and let the Middle East and American interests burn to the ground. Note: Apparently, he thinks someone can verbally give him the Cliffs notes‘ version while he‘s on his way to his next friendly campaign stop.

The Obama non-policies have gutted the US Treasury and destroyed our economy. They have exalted Islam above Christianity and Judaism and placed the USA and its people into Dhimmitude. Obama “godfather” David Axelrod has threatened American polling companies with lawsuits (one already filed against Gallup by the DOJ) if they don’t play ball and report that Obama is trouncing Governor Romney in their polls…irrespective of the true results.

And now, they have caused preplanned explosions in Muslim Brotherhood-led countries (remember that Obama has appointed MB members to the highest levels of US National Security)–explosions which are already leading to attempted attacks on other Western countries; the most recent against Germany and Great Britain. And the polls are showing a “widening lead over Romney” for Dictator Obama? Voters would rather have their lives and the lives of their loved ones and country destroyed than elect someone who will place it back on course? Really? Poppycock!

Pay no attention to these Obama-induced polls. The pollsters are running scared and, as usual, it will be up to us to provide the courage and the truth. Obama is decimating the USA and We-the-People on every level possible and we are supposed to believe that the majority of our citizens want it? I for one do not believe that we are that innately stupid. We must vote Mitt Romney (BTW, an actual Natural-born US citizen) into the Office of the Presidency of the United States. I’m just praying that we can survive Obama and his hordes until President Romney is elected.

“I have sworn upon the altar of God, eternal hostility against every form of tyranny over the mind of man.”
– Thomas Jefferson

Ambassador Stevens’s brutal death at the hands of Radical Islam:
at communities.washingtontimes.com

Leading from his behind

Barack Obama does not allow his campaign schedule to be disturbed – not to meet with Netanyahu – not to go participate in national security updates – not to deal with the crises the U.S. government participated in causing throughout the Middle East with its instigation and involvement in Arab Spring. 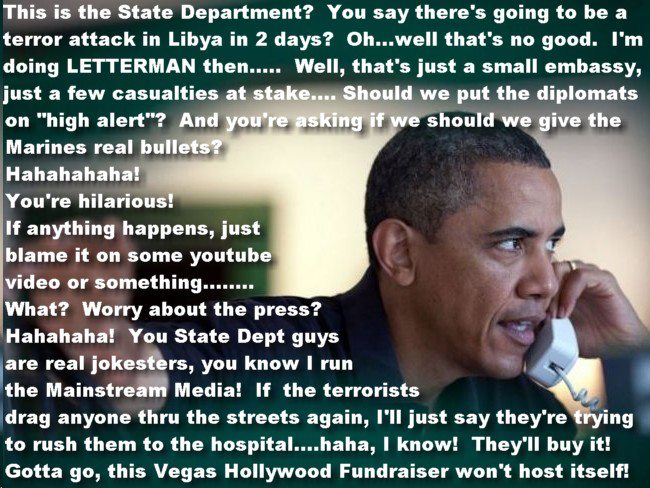 Is it reasonable to believe that the random acts of [war], violence and murder against United States Embassies and staff in Egypt and Libya–as we here at home were paying homage to the thousands of dead U.S. civilians on the 11th anniversary of “9/11”–were ‘spontaneously’ ignited by several short, ‘C’ movie trailers (which I have watched) posted on YouTube six months ago?

And in just three days, according to an Associated Press article today, these ‘riots and attacks’–not protests–have spread to a total of 20 Muslim countries, across the rest of North Africa, through the Middle East and into Southeast Asia?

No–but that is what we are being sold.

In reality, all Americans can see that the ‘unexpected’ events of this past week clearly show there is no captain’s hand on the tiller of the U.S. ‘ship of state,’ as Barack Obama abdicated the Oval Office sometime last fall, making his real ‘job-one’ the campaign trail and fund raising events–the only things for which he has ever shown any savvy.

A further indication is that President Obama has been AWOL from more than half of his Presidential Daily Brief (PDB) — the meeting at which he is briefed on the most critical intelligence threats to the country, according to Marc Thiessen’s September 10, 2012 Washington Post article.

During his first 1,225 days in office, Obama attended his PDB just 536 times (43.8 percent); but since the beginning of 2011 he has attended just over 38 percent. By contrast, George W. Bush almost never missed his daily intelligence meeting.

And to top it off, Obama refused to make time to meet with Israeli Prime Minister Benjamin Netanyahu, who is traveled to the U.S.–because he had a ‘scheduling conflict’–he was attending a fund raiser with Jay Z and Beyonce in New York.

This explains how Barack Obama and the State Department were caught ‘flat-footed’ by the events of this past week, and as more information is becoming available the more unflattering it is becoming.

For example, it is confirmed that a top al-Qaeda operative was spotted in the ‘mob’ outside the U.S. Embassy Cairo.

Also, post-battle analysis of the attack on the U.S. Mission in Libya that killed Ambassador Christopher Stevens, a staff member and two former Navy SEALS hired to provide security, indicates that it was a prior-planned and well executed military assault–possibly by members of al-Qaeda or related entities.

Equally disturbing is recent reporting by The Independent, referenced in Jason Howerton’s article in The Blaze yesterday.

Senior diplomatic sources say the U.S. State Department had credible information, 48 hours prior to the attack on the U.S. consulate in Benghazi, Libya and the embassy in Cairo, that American locations may be targeted, however, no warnings were issued, no ‘lock-down’ orders given.

Finally, it is clear that Barack Obama’s foreign policy in the Muslim world is not working, when the clerics in the mosques all over that world appear to hate the United States even more than before, according to reporting in an Associated Press article today.

At the U.S. Embassy in Tunisia, local police chased hundreds of ‘protesters’ out and took down another Muslim black flag raised upon the pole where the now burned American flag once hung.

Then, moving south into Sudan, a fiery prominent sheik named Mohammed Jizouly inflamed his flock and urged them to storm the U.S. Embassy in Sudan during his Friday state radio broadcast of Muslim prayers, pronouncing…

America has long been an enemy to Islam and to Sudan.

Finally, Rifaei Taha, a leader in Egypt’s Jihad group holding a conference in the Egyptian city of Alexandria, proclaimed that anyone who “defamed” the prophet should be killed. Then, he called on Egypt’s newly elected President, Mohammed Morsi to cut relations with U.S. by saying…

I appeal to President Mohammed Morsi to cut our relations with those monkeys and pigs.

Rep. Randy Forbes (R-VA), a member of the House Armed Services Committee, made this clear observation about President Obama and the gang in Chicago, in a FOXNews article today…

They’ve got to get out of campaign mode and get into leadership mode … and they really haven’t done it in this situation.

However, a majority of Americans would probably say that Barack Obama never got into a ‘leadership mode’ since his inauguration.