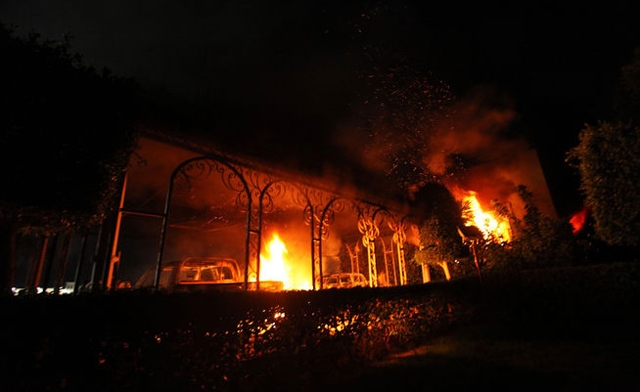 Al Arabiya News: Tuesday’s attack by armed men in the eastern city of Benghazi came amid a wave of protests in the Muslim world against a U.S.-made amateur Internet film deemed insulting to the Prophet Mohammed. (Reuters)

Last week, I warned of the gathering storm clouds of World War III. This week, the ponderous gears of war were set into motion by Jihadists in the name of Allah across the planet. The trigger was said to be an amateurish YouTube video that Muslims found offensive. May I just say, bull crap. The attacks in Libya and Cairo were well planned and executed. The riots in 20+ countries across the globe were also called for, planned and carried out by Islamic leaders of terror. Al-Qaeda is claiming this is in revenge for the killing of their number two man Sheikh Abu Yahya. This has all the earmarks, by the way, of one of Soros’ colored revolutions. 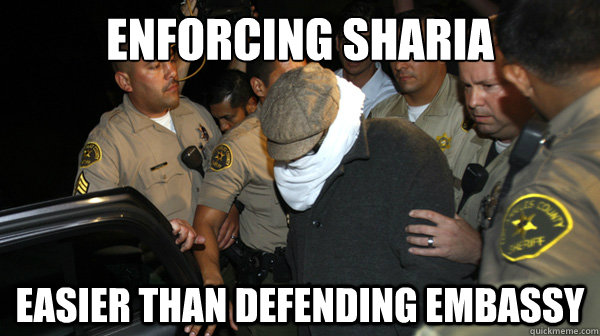 Photo of the filmmaker being brought in for questioning.

Do you really believe this all just ‘happened’ on 9/11? Really? The United States was warned at least 3 days prior to the attack, and by some accounts it was a week. But Hillary Clinton, Barack Obama and their minions did nothing. Unless of course you count drinking and partying abroad as Clinton does in excess and schmoozing with celebrities on Letterman and in Hollywood and Las Vegas as Barack Obama does. Our esteemed leader in chief could not even be bothered to stay awake when our Ambassador was being sodomized, tortured and murdered in a preplanned location where he should have been safe. Three others,including an ex-Navy SEAL were also killed. Obama went to bed and didn’t get briefed till the next day. Meanwhile, our NOC list was taken, outing all those who support America and her activities in that area. Well done. You can now count the lifespan of our intelligence agents that are still over there on an egg timer. Pardon me, but this all looks staged. Take a long look at a Post-American world:

Forget the UN, the Post-American order isn’t a blue flag, it’s a black flag with Mohammed on it. There are far more people in the world who believe in a world order based on the violent ravings of a 7th Century madman than the number of people who believe in a world order based on 19th Century European wishful thinking. And it helps that the supporters of 7th Century violence over 19th Century internationalism are far more willing to use murderous violence to get their way. 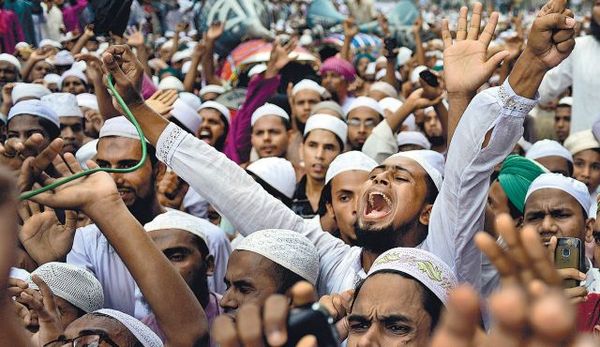 As I understand it, per our daft foreign policy, we don’t have Marines or other military personnel guarding our diplomats. Nope, in our infinite wisdom we leave that to the hosting country’s government and military. Genius! In other words, the fox guarding the chicken coop turned into a wolf and ate his charges and we couldn’t see it coming. Even if we had military there, they wouldn’t have ammo thanks to Hillary Clinton and her drunken mandates.

As of this morning our government is telling our personnel and their families in Tunisia and the Sudan to get out of there as soon as possible. They should be evacuating every American from every Middle Eastern country and place of unrest immediately. That includes our troops. They are being surrounded and set up to be slaughtered. We lost two Marines in Afghanistan at Camp Bastion where they were serving alongside Prince Harry. A number were hurt as well. Those that stormed the base were wearing American uniforms. More attacks are occurring as I write this.

As the White House prepares for a long siege of Arab unrest, Israel is girding her loins for battle as the High Holy Days commence. War games began in the Straight of Hormuz yesterday and will continue for 12 days:

Battleships, aircraft carriers, minesweepers and submarines from 25 nations are converging on the strategically important Strait of Hormuz in an unprecedented show of force as Israel and Iran move towards the brink of war.

These are the largest war games ever undertaken in the region. The world’s leaders and their respective militaries know that war is upon us. And it may be the war to end all wars with nuclear capabilities now strewn across the globe and religious hatred fomenting hundreds of thousands — millions actually — of fanatics. The planet is a ticking time bomb and Obama has lit the fuse. 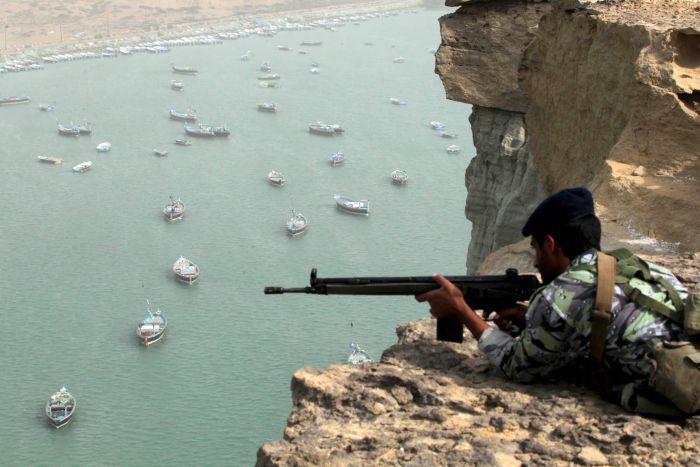 Iran is gleefully prepping for Armageddon:

Next month, Iran will stage massive military manoeuvres of its own, to show that it is prepared to defend its nuclear installations against the threat of aerial bombardment.

The exercise is being showcased as the biggest air defence war game in the Islamic Republic’s history, and will be its most visible response yet to the prospect of an Israeli military strike.

Using surface-to-air missiles, unmanned drones and state-of-the-art radar, Iran’s Revolutionary Guards and air force will combine to test the defences of 3,600 sensitive locations throughout the country, including oil refineries and uranium enrichment facilities.

Their nuclear weapons are buried deep and hardened. Iran’s theocratic leadership is absolutely willing to see their country turned into glass to further a worldwide Caliphate and the Islamic empire. The chaos and war around the planet is all part of the precursor to welcome back the Twelfth Imam and the End of Days.

Obama refused to answer a reporter if these were acts of war. Think of those who stand to benefit from war:

There are others out there wielding power and money behind the scenes. That’s not a conspiracy – that’s just the plain truth. It has always been that way. Each believes he will win in the end and then kill the others he joined forces with to gain power. Sadly, at this point in time, Russia and China look to be the strongest and are willing to sacrifice the most people. They are also the most brutal and the strongest militarily.

Our problem from the beginning is that we refuse to face evil. America has refused to name our enemy out of political correctness. Our enemies are radical Islam and Communism. It’s not a War on Terror – that is a symptom. Not calling our enemies out is about to get us annihilated.

I am torn as so many of you are. My heart and soul still cries out for retribution over 9/11. I have never felt that we went after the true culprit, which is Iran. We should have finished this war back in the late 70s, early 80s. Now it threatens to engulf us and the civilized world. Our weakness is apparent and our enemies smell blood in the water. But while I suppress the urge to call for the leveling of Iran and other Islamic countries, I know that once we go there, our world will fill with blood and death. It is my belief that Obama will take us to war, not to win it, but to bolster himself politically. He secretly gloats at the thought of Israel’s destruction. He wants America to fall and is helping our enemies achieve that through acts of war. 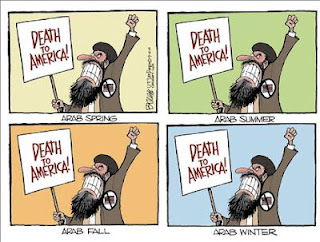