The world isn’t a Fairyland of Cosmic Brotherhood

A U.S. ambassador is dead, and over 30 U.S. embassies across the globe are under violent attack as a direct result of President Obama’s attempted appeasement of radical Islam. How many more Americans will die before that policy can be reversed and Obama removed from office?

Keep in mind that by international treaty and tradition, every embassy in a foreign nation is considered the sovereign soil of that nation. Climbing a wall and invading an embassy compound is the same as invading that country.

The horrific events of Sept. 11, 2012, in Egypt and Benghazi were a logical and predictable result of appeasement policies that began with Obama’s 2009 speech in Cairo apologizing for America’s past insensitivities to the hopes and beliefs of the Muslim faith.

Obama chose last Tuesday, the 11th anniversary of the 2001 murder of over 3,000 Americans by a team of radical Islamists, to send a formal message to the world: “The U.S. will never be at war with Islam.” At that moment a crowd of over 2,000 Islamists were attacking the U.S. Embassy in Cairo, breaching its wall and burning the American flag.

What was the first response of the Obama government to this attack on our Cairo embassy and the failure of the Egyptian government to protect our sovereign soil? The embassy issued an apology for the actions of private individuals in the U.S. who put a film on YouTube that insults Islam and the Prophet Muhammad.

It took the Obama White House almost 12 hours to disavow that apology and over 24 hours for Obama to talk directly with Egyptian President Morsi to elicit an apology and a promise of increased protection for the embassy. However, the apologies continue: The White House has asked YouTube to review the controversial film to see if it meets its standards. Has the administration ever done this for any other privately produced 14-minute film?

So, what did Egyptian President Morsi do next? Did Morsi attempt to calm the stormy waters by going on Egyptian television to explain that a film produced by private citizens had no relation to official U.S. foreign policy? No. Morsi, a member of the Muslim Brotherhood organization that had condoned the embassy protests only 24 hours earlier, called on the citizens of Egypt to engage in “peaceful protests” against the film.

The brutal fact of the matter is that President Obama’s weak actions since the violent events in Cairo and Benghazi have only served to fuel the protests, not deter them. This should surprise no one because Obama’s anti-Israel foreign policy has been fueling anti-Americanism across the region since the day he took office.

The other undeniable fact is that the protests against the United States now under way at our embassies – embassies across the world, not only in the Middle East – are not the actions of a small radical band of extremists. The protests have the support and reflect the official position of the Egyptian government and other Islamic regimes in the region.

This support for the protests by Islamic governments across the world may force the U.S. news media to acknowledge a reality they have worked hard to ignore and suppress: it is mainstream Shariah law, not some radical heresy, which demands that offenses against Islam and insults to the prophet Muhammad be severely punished – punished by civil authorities.

These protests and this crisis should serve to educate Americans about the true character of the escalating cultural war between the civilized West and the Islamic world. It is Islam itself and not only al-Qaida and the Taliban that rejects the civil-liberties traditions of Western democracies. The controversy over this film puts a huge spotlight on one central fact: Islam does not recognize or allow for any separation of church and state, and any criticism of the prophet Muhammad in the form of books, films, or cartoons will be met with violence.

No Islamic country would allow a film to be made or shown – or even possessed – critical of Islam. OK, you say, that is their privilege. But why has the U.S. State Department under Obama shown support for the efforts of the Organization of Islamic Cooperation – led by Egypt and Iran – to get the United Nations to adopt a resolution demanding that all nations adopt this same principle? Egypt has been among the Arab nations leading the effort to subordinate the U.S. Constitution to Islamic Shariah law.

Obama does not want to acknowledge or respond to the fact that to a billion Muslims across the globe, it is the obligation of the American government to punish the individuals who made that film. That must be one reason for his decision to miss his Wednesday intelligence briefing and flee to Las Vegas and the campaign trail. Obama is perplexed and confused by these events. These things are not supposed to happen in his fairyland of cosmic brotherhood.

Obama’s only material response to the murder of Ambassador Stevens on Tuesday was to send a contingent of U.S. Marines to Libya to protect our embassy in Tripoli. Will he now send 60 or a hundred additional Marine units to protect the other embassies now under siege?

The proper diplomatic response to threats against embassies that cannot or will not be handled by the host government is to close the embassy and bring diplomatic personnel home. That is what Obama should do in Cairo and a dozen other Islamic nations. 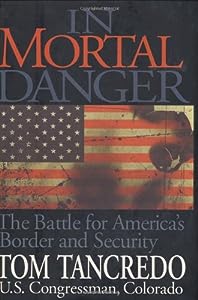 Concerned about the impact of illegal aliens on the United States? Don’t miss Tom Tancredo’s book, “In Mortal Danger: The Battle for America’s Border and Security” – now just $7.95!