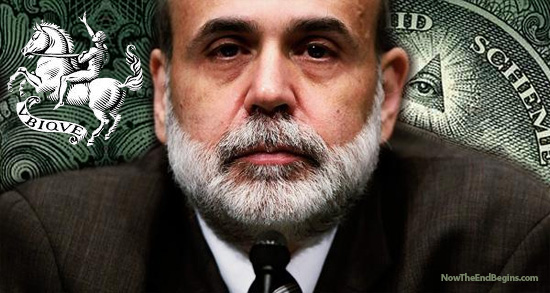 Do you want to know who scares me as much as your boss Barack? Well, that would be you Ben.

You see I have a little time on my hands to research events, actions and their possible outcomes as to how they can possibly affect the normal everyday life of Americans. I do this in an effort to try and make sense of what I see happening. Actually, I look for any events that will affect what it is that I have tried to accumulate in life and how those events can affect my holdings. Some would call it paranoid. I call it prudence and self-survival. There is one other reason I do this. It’s an effort to protect my family and friends from Robber Barons and your merry little band of thieves. The term Robber Baron is a kind description based on what I would truly like to say about you and your boss but I refrain. Your actions have brought out the inner rage within and the words are truly restrained. Trust me.

Here is a question for you Ben. How does it feel to be a serial rapist? What does it feel like? As you know rapists come in many forms. You just happen to dress better than the mug in cellblock B. How does it feel to have ravished the future of the nation’s retirees with your insane monetary policies? Policies and actions that are guaranteed to wreak havoc through ensuing inflation that has, and will be, the result of your attempt at whatever the hell you are doing. It’s called monetary rape and in my mind you are guilty as charged.

What’s it like to hit the print button and flood the market with valueless digital dollars in an effort to save your job as well as Barack’s? Your fancy offices and titles saved by greasing the money junkies on Wall Street’s insatiable appetite for their quick fix. Monetary actions that help create the false illusion of short-term prosperity with a sole purpose to win an election on the backs of all Americans. The end result—we are all being raped and when the monetized sugar high fades, the 401K drops again, what next?? QE4, QE10—what? How many times will you print before the value of the dollar is equal to or less than zero? There have been a few before you that have pursued this insidious practice and it didn’t end well. But you are a smart man Ben and you know this fact. Yet, you continue down this road. Monetary rape is an ugly, painful form of torture and you my friend are becoming a vibrant master of its infliction on all Americans.

Here’s another question for you Ben. Are you in on Barack’s main agenda? The one he was chosen for? I told you I have researched and learned things, so this question shouldn’t surprise you. He called it the beginning of his: ‘Fundamental Transformation of America’ and a lot of smart people missed its true meaning. Not many understood the darkness of his vision. Not many understood that in order to achieve the means to these devilish ends would require the destruction of this country’s basic foundation. See if any of the following observations ring a bell.

I started with researching the United Nations Agenda 21 Project. Ever hear of it? Oh, Ben come on… I know you have. I read this piece of work and guess what Benny? It’s a veiled attempt for a one-world government, a one-world bank, disguised as a movement to save the planet through sustainable environmental actions with an elite few controlling the agenda. Let me ask you this question… do you have visions of being one of the elite?

I digress; how can you be an elitist with a financial statement that says you are only worth – and correct me if I’m wrong – a paltry 1.2 Million. Pretty piss poor for and elitist my friend. Most of the elites are worth a whole lot more. In fact, I know some plumbers who have done better than that. Is there something you are holding back? I know you have the keys to the vault, but like a lot of your boss’ early life, your vault and his life are not transparent.

After I digested what it was I learned about Agenda 21 and how the presidential executive orders issued by Barack and his predecessors to enact this vision were for real, I became even more curious. The question I asked myself was this, “Who was truly behind this Agenda 21 United Nations mandate?” Let’s face it, the United Nations isn’t known for its legislative inventive prowess, now is it?

As I was searching for the power behind the power, I ran across a little known, yet very influential think tank known as the Club of Rome. Bingo Ben. I hit the jackpot with this group. Suffice it to say they were the original conceptual brains behind the origination of Agenda 21. I’m not going to bore you with details that you already know, but I do need to mention just a couple of little observations that most people would like to hear. It’s a little known principle that I like to call, “Mandates of function enacted for predicted outcomes in order to receive a positive response for the power and control wanted.” Hope I didn’t loose you on that one, but you most likely already know where I’m heading with this.

We both know that America is an anomaly in history. The Founders really did deviate from the known sources of governance of the time and if success is graded on accomplishments, well let’s think, America became and still is the greatest country the world has ever known. I would say a fantastic result.

As stated by both of the above-mentioned groups, in order to achieve the prime function, and that is one-world governance, the United States had to go through some Fundamental Transformations and the number one status we enjoy as a nation needed to be diminished. We needed to be taken down a notch. By looking at the Czars your boss has placed into power, their like-minded philosophies and their outlooks on governance, simply put it’s the Agenda 21 power structure put into practical application throughout the bowels of Washington.

Hold the bus Ben, as I think we all heard the call for Hope and Change except for one thing… the concept of what the end game of the Fundamental Change would look like. It was never stated or asked about in the non-vetting of the president prior to, or even after the election. It still hasn’t been asked or talked about in detail. I now hold the Republicans responsible. They should be screaming from the rooftops: socialist, socialist, socialist! Got it?

Anyway, what the UN and the Club of Rome both said was this; that if the Fundamental Change was to be achieved, someone needed to oversee the enactment of the weakening of the United States in the following areas. These areas would include the military, the free market system, energy, the family, health and human services, the education system, religion and most importantly the dismantling of the Constitution. This is just a partial list, but sounds like breakfasting in the Hamptons with Barack, his Czars and yourself, right? In other words, it basically destroys the fabric that has made us strong.

One last thought. I own a small business. It’s just a part time little thing that serves two purposes. The first is to offset the cost of my family’s healthcare. Our healthcare costs have risen in the neighborhood of thirty eight percent since the enactment of the Affordable Health Care Act. What a play on words and the worst is yet to come. Unlike Congress I read the bill, knew what was in it and when I say the worst is yet to come, I truly mean it. The second reason for my little business is to donate a portion of the proceeds to the Wounded Warrior Project in an effort to help the young men who have sacrificed so much for this country. Could I expand this little enterprise into a larger more productive entity? Oh, that is a given. But here is the question… why in the hell should I when I know that your boss will have his greedy mouth at my trough sucking out every morsel of my fruit, every bit of my profit in order to redistribute the profits of my hard labor to those who he deems necessary or worthy. Why? For the votes he needs in return for his payout to his idea of the less fortunate in order to maintain his position at the head of the trough.

If you aren’t busy devaluing the fruit, it appears he is busy stealing the tree and that’s one hell of a situation. Maybe you figured it out already, but I have no desire to expand my little enterprise, nor do a lot of other business owners. You have killed the motivation.

As you can tell, I am not a fan of you, your boss, his Czars and his vision. I hope and pray that Americans wake up and rid themselves of all of the above. This has to be done for all that is right and holy with this nation. In my humble opinion you and your boss are both elite, narcissistic socialists at best, but more likely, something deeper and darker. I know that you are following the will of some nameless, yet very powerful entities with even darker desires.