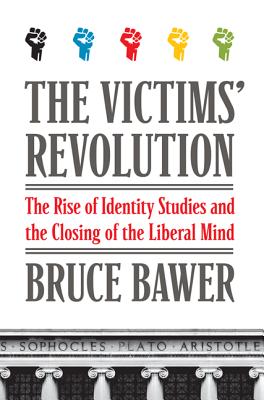 My latest read is an incredible book by Bruce Bawer: The Victims’ Revolution: The Rise of Identity Studies and the Closing of the Liberal Mind. Bawer is a poet and a literary critic and he goes where few others dare. Into the maw of academia armed with intellect and facts.

Witty and humorous, Bawer gives us a sharp and focused view into American universities and their enclosed culture. Bawer highlights the incompetence of professors in their political correctness and adherence to elitist academic buffoonery, all the while putting on display their less than literate prowess. He showcases their ‘victim’ mentality that they press upon students and others, using words steeped in propaganda, arrogance and entitlement. Clearly a slap in the face of the ivory towered academia and their much sought after ‘oppression’ laden, fawning students.

Bawer specifically exposes Identity Studies. His brilliant analysis delves into how academic discourse can have very little to do with reality while having horrific consequences. His book deals with the moral and political confusion of today’s western culture: eschewing all that is good, while embracing violence and thuggery as a solution to our ills. This is at the heart of higher education and a sick form of rebellion has been nurtured there by academia and embraced by students. It is a formula for violence, degradation and downfall. In fact, it has spread far beyond the classroom and reaches into every facet of life now for most of us. As corrosive as any acid, this Progressive fermentation of entitlement, jealousy and elitism is eating away at the very fabric of America’s soul.

The book is filled with statistics and facts on humanities texts. It is a mixture of humor, deep thought and clarity. This book should be required reading for every college student and their parents.

I want to give you a description of Bruce Bawer as an author and some of his work. Harper Collins has a great summation:

Respected author, critic, and essayist Bruce Bawer—whose previous book, While Europe Slept: How Radical Islam Is Destroying the West from Within, was a New York Times bestseller and a National Book Critics Circle Award finalist—now offers a trenchant and sweeping critique of the sorry state of higher education since the campus revolutions of the late ’60s and early ’70s. In The Victims’ Revolution, Bawer incisively contends that the rise of identity-based college courses and disciplines (Women’s Studies, Black Studies, Gay Studies, etc.) forty years ago has resulted in an impoverishment of thought and widespread political confusion, while filling the brains of students with politically correct mush. Timely, controversial, and brilliantly argued, Bawer’s The Victims’ Revolution is necessary reading for students, educators, and anyone concerned about the contemporary crisis in academia—a serious and important work that stands with other essential books on the subject, like The Shadow University by Alan Kors, Illiberal Education by Dinesh D’Souza, and Allan Bloom’s The Closing of the American Mind.

An eye-opening critique of the identity-based revolution that has transformed American campuses and its effect on politics and society today.

The 1960s and ’70s were a time of dramatic upheaval in American universities as a new generation of scholar-activists rejected traditional humanism in favor of a radical ideology that denied esthetic merit and objective truth. In The Victims’ Revolution, critic and scholar Bruce Bawer provides the first true history of this radical movement and a sweeping assessment of its intellectual and cultural fruits.

Once, Bawer argues, the purpose of higher education had been to introduce students to the legacy of Western civilization—“the best that has been thought and said.” The new generation of radical educators sought instead to unmask the West as the perpetrator of global injustice. Age-old values of goodness, truth, and beauty were disparaged as mere weapons in an ongoing struggle of the powerful against the powerless. Shifting the focus of the humanities to the purported victims of Western colonialism, imperialism, and capitalism, the new politicized approach to the humanities gave rise to a series of identity-based programs, including Women’s Studies, Black Studies, Queer Studies, and Chicano Studies. As a result, the serious and objective study of human civilization and culture was replaced by “theoretical” approaches emphasizing group identity, victimhood, and lockstep “progressive” politics.

What have the advocates of this new anti-Western ideology accomplished?

Twenty-five years ago, Allan Bloom warned against the corruption of the humanities in The Closing of the American Mind. Bawer’s book presents compelling evidence that Bloom and other conservative critics were right to be alarmed. The Victims’ Revolution describes how the new identity-based disciplines came into being, examines their major proponents and texts, and trenchantly critiques their underlying premises. Bawer concludes that the influence of these programs has impoverished our thought, confused our politics, and filled the minds of their impressionable students with politically correct mush. Bawer’s book is must-reading for all those concerned not only about the declining quality of American higher education, but also about the fate of our society at large.

This book is a very good, in-depth read on the subject matter by a brilliant author. As you can see by other books he has written, he is one to tell the truth and expose the radical agenda that is unfolding in America today put forth by Progressives and others who mean us harm. This book should be on every parent and student’s bookshelf – definitely a five star read. You can purchase the book here.

One thought on “Book Review – The Victims’ Revolution”