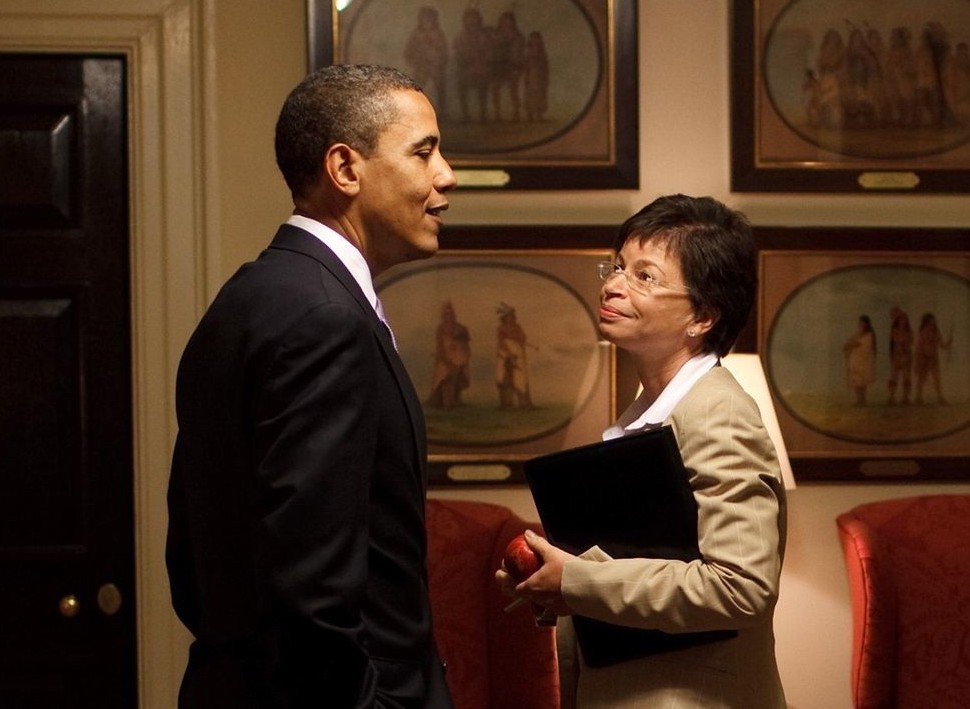 Barack Hussein Obama, in a moment of desperation, took the gloves off the other day when he told his supporters at a rally in Springfield, Ohio that “Voting is the best REVENGE”. That comment was probably suggested by an earlier thought expressed by his White House aid Valerie Jarrett who said that “a big part of that (2nd term) agenda is to punish everyone who opposed them“. What Mr. Obama failed to realize is that that is the exact same reason why so many Republicans will be turning out on Tuesday to end his war on America. If Obama studied history instead of law while in college he might have recalled the famous words of Japanese Admiral Yamamoto after his attack on Pearl Harbor, “I fear all we have done is to awaken a sleeping giant and fill him with a terrible resolve.”

Like the Japanese sneak attack on Pearl Harbor, Barack Hussein Obama sneaked upon the American political scene and beguiled a nation with his covert intentions, all with the aid of saboteurs spread across the news media who covered his tracks. For the past four years Barack Hussein Obama and a cabal of leftist Democrats have been waging a war on America since the first day he took office. He continued to benefit from the economic catastrophe planned and executed by his fellow Democrats, Senator Chris Dodd and Rep. Barney Frank, all the while blaming the previous Republican administration that was controlled by a Democrat majority in both houses of Congress. Using the banking and housing crisis to his advantage he borrowed trillions of dollars from China and squandered the resources on enterprises owned by his political supporters while at the same time twice causing the lowering of the credit rating of our nation. He plotted the takeover of America’s health industry with fellow Democrats Nancy Pelosi and Harry Reid, crafting a Socialist plan filled with hidden taxes that were purposely scheduled to fall in place after the next election at the expense of the elderly and the middle class. When he couldn’t get his way he declared Congress to be an inconvenience so he wrote dozens of Executive Orders creating new laws without any Constitutional authority. And he went on a world tour apologizing to our enemies and embarrassing every American by bowing before the leaders of the world thus destroying the prestige of the United States. And now he speaks of seeking revenge upon those who oppose him.

I’ll give you an example of revenge that would give every liberal in America nightmares: Treason Trials. Think about Nuremberg. The Nuremberg Trials were a series of military tribunals, held by the Allied forces after World War II, most notable for the prosecution of prominent members of the political, military, and economic leadership of the Socialist government of Nazi Germany. The trials were held appropriately in the Palace of Justice in Nuremberg, Germany, in 1945. Those convicted of war crimes were hanged. And here at home giving Aid and Comfort to the Enemy is considered Treason, helping the enemy to kill American soldiers with a restrictive Rules of Engagement is Treason, and that includes the U.S. Ambassador and three other Americans in Benghazi, Libya, as well. How’s that for a retirement plan for Barack Hussein Obama and Hillary Clinton. And in spite of all his efforts to trash the U.S. Constitution, the crime of Treason is the only crime specifically mentioned in that great blueprint for our Republic.

No political party in the history of American politics has tried so hard as the Democrats have to destroy every great thing about our country. At their national convention they almost succeeded in removing the name of God from their party platform and by the sound of the three voice votes that were taken, it appears that the majority of the delegates were still in favor of doing it when the platform chairman ruled that God’s Name could remain. One can only hope and pray that the sarcasm once told about German philosopher Friedrich Nietzsche could come true today and be applied to those godless Democrats when it was joked that “Nietzsche said God is dead. God then said Nietzsche is dead.” Yes, revenge is a sweet and bitter thing to behold especially when dealt out by the just and righteous.

Barack Hussein Obama and the Democratic Party and their multitude of liberal supporters in the news media and entertainment industry have used every dirty trick to divide our nation into a racist class war. They have pitted the poor against the wealthy. Those that earn wages against those that create jobs. They have tried to convince evangelical Christians not to vote for Mitt Romney because he is a Mormon. A religion that does not believe in everything Christians believe in. So what if they don’t? Jews are good people, too, and they don’t believe in everything that Christians believe in. But they all believe in the same God who gave us the Ten Commandments. How different is this from Barack Hussein Obama, himself a one-time Muslim, who told us we must respect Islam, a religion that preaches death and torture for Christians and Jews. And as far as Barack Hussein Obama’s make-believe Christian faith goes, Pastor Joseph Lowery, a civil rights movement hero who delivered the benediction at President Obama’s inauguration, reportedly said that he is shocked that any black Americans would stay home with Obama on the ballot and suggested that all or most white people would go to hell if they did not vote for him. A similar racist statement that other black Democrats have expressed.

Union supporters of Obama have become the beneficiaries of special treatment from him at the expense of taxpayers and non-union workers. How about Obama’s illegal confiscation of General Motors, touted by the Obama campaign as the salvation of the motor industry, giving the United Auto Workers Union 1/3 of the company ownership and two union reps on the Board of Directors while he cancelled the pension plans of the non-union workers at GM’s parts supplier Delphi Automotive. Not much has been said about the thousands of exemption waivers to Obama’s socialized medicine plan that Obama’s union backers have asked for and received from him. The most obvious question is that if Obamacare is so good why have so many of his supporters asked to be exempted from it? And lets not forget the words from Obama’s mouth about how we should redistribute the wealth, quoted right from the writings of Karl Marx, the father of communism.

Valerie Jarrett has been described as the “brains” in The White House behind Barack Hussein Obama. And considering the 2.6 GPA average that young Barry received during his drug-filled days at Columbia University, he can probably use all the brains he can get. Valerie Bowman Jarrett (born November 14, 1956) is a Senior Adviser to the President of the United States and Assistant to the President for Public Engagement and Intergovernmental Affairs in the Obama administration. And on the subject of the revenge that the Democrats have planned for America, here is a little quote from the Wall Street Insider:

“A rep from Valerie Jarrett’s office was in today. She gave us a finish line pep talk and then afterwards, heard her saying how Jarrett is very excited about a 2nd term agenda and a big part of that agenda is to punish everyone who opposed them during the first term and the campaign.”

“The part that really stuck out to me was when I overheard the rep say that Jarrett told them, “After we win this election, it’s our turn. Payback time. Everyone not with us is against us and they better be ready because we don’t forget. The ones who helped us will be rewarded, the ones who opposed us will get what they deserve. There is going to be hell to pay. Congress won’t be a problem for us this time. No election to worry about after this is over and we have two judges ready to go.” (Presumably for the Supreme Court, emphasis mine) She was talking directly to about three of them. Sr. staff. And she wasn’t trying to be quiet about it at all. And they were all listening and shaking their heads and smiling while she said it. Pretty creepy.”

Can you imagine what these godless, leftist Democrats could do if they managed to replace two more Justices on the U.S. Supreme Court? Two of the conservative Justices are already over 70 years of age and could easily be expected to retire in the next four years. Antonin Scalia is 76 years old and Anthony Kennedy, who often votes conservative, is 75 years old. That would certainly become the legal channel in which Barack Hussein Obama would seek revenge against all those who still cling to their guns and their bibles. Imagine America without our Bill of Rights. Imagine Obama’s America in 2016. Imagine another civil war in America. The Obama government has already made plans for it. Obama has insisted and gotten laws passed giving him the authority to arrest and detain without trial any American citizen. They have built the concentration camps which they call Internment Centers. They have advertised the jobs there on the GoArmy web site. They have purchased millions of rounds of hollow-point ammunition to be used by Homeland Security, ammunition that is banned by the Geneva Convention. They have declared God-fearing Christians as domestic terrorists. The election on Tuesday is all about the future of our Republic, and the outcome will be either War or Peace or Revenge. God help us if Obama wins and that comes true.

VOTE REPUBLICAN
SAVE
THE REPUBLIC

2 thoughts on “Will Tuesday be the End of Obama’s Final War on America or the Beginning of his Revenge?”