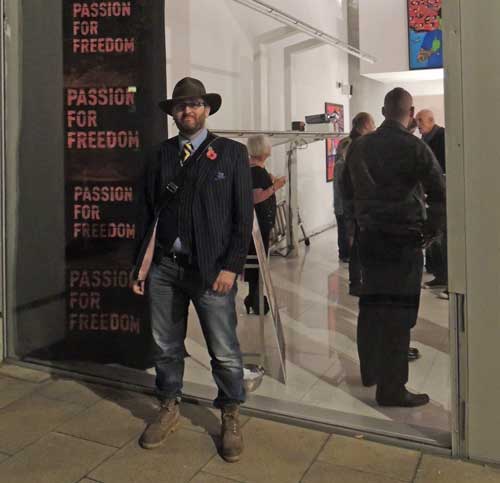 Last Saturday senior members of the International Civil Liberties Alliance (ICLA) were honoured to accept invitations to attend the Passion for Freedom art festival. This prestigious art festival took place in the centre of the British capital. It is an important annual event that draws attention to increasingly ignored human rights issues.

As a human rights organisation that aims to uphold democracy, freedom and individual liberties, ICLA attaches great importance to such cutting edge events. Events that highlight our current slide into tyranny are now more vital than ever.

Only a few years ago human rights abuses were something mostly associated with countries outside the West. Now these abuses are a common feature in places like London, a city that was once famed throughout the world for its liberty, democracy, and tolerance. What has changed?

As a result of sharia compliance Britain is now a country of speech codes, censorship, and laws that curtail and criminalize basic freedoms. Sharia enforces second class status on women and non-Muslims, it opposes freedom of speech, and it is a source of cruel and unusual punishments. Nevertheless, it is promoted by an out of touch political elite that is increasingly drunk with power. It is promoted contrary to the will of the population. 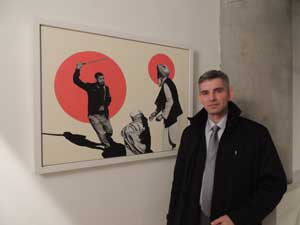 ICLA Chairman Alain Wagner next to one of the exhibits

Many of the exhibits at the festival highlighted the dangers of sharia compliance. They illustrated the misery and suffering that sharia law can and does cause. The exhibition draws attention the dangers of the misguided pro sharia policies of governments across the once free world. These governments are not even willing to pause to contemplate the consequences of their actions. It seems that government for the people and by the people has come to an end across the entire Western world.

Western governments are now considering taking sharia compliance to the next level. They are doing this in response to the relentless demands of UNHRC Resolution 16/18. Resolution 16/18 claims to be an instrument of religious tolerance. However the standards of religious tolerance are those set by the Organisation of Islamic Cooperation (OIC) which has been aggressively lobbying for 16/18. Many OIC member states are text book examples of the most vicious religious persecution. Is it really wise to make OIC norms the norms of the world? Some of the art works were effective visual representations of what 16/18 will mean if it becomes law in the land of free speech.

The religious bigotry in countries like Saudi Arabia are well documented. Do we really want that country to be the template for the norms of global governance? Resolution 16/18 is not an instrument of tolerance but on of theocratic tyranny! 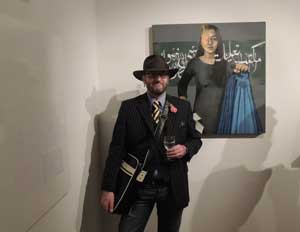 Human rights activist Chris Knowles, who was fired by Leeds City Council for his anti-sharia work, in front of one of the exhibits.

It is important to acknowledge the contribution that art can make to the struggle against sharia. The brave artists who challenge the taboos associated with addressing the issues are performing a great service to humanity. They and their work should be celebrated and honoured. Passion for Freedom does that. That is why such events are of critical importance. That is why they need to evolve into true institutions. Institutions of the people, completely independent from the corruptions, norms, and prejudices of an increasingly out of touch governing caste.

The key moment of Saturday’s Passion for Freedom event was the presentation of the Passion for Freedom awards. The winning works of art can be seen on the organisers’ website. There were also some excellent speeches including one by Maryam Namazie of One Law for All.

The opening night produced a packed venue with over 350 people present. This illustrates the increasing concern about the effects of sharia compliance on the part of those who value art and who cherish artistic and intellectual freedom. It shows that people are not going to be intimidated by the pro sharia brigade and their enablers in government. Passion for Freedom is not art for art’s sake. It is art for the sake of freedom. Such nobility of purpose provides the works with an almost spiritual quality.

There seemed to be a large number of people present who had traveled from France including our own Chairman, Alain Wagner. There were other people from Russia and Poland, and probably many other countries. There was a good cosmopolitan feel to the exhibition. The event has already attracted international interest and is likely to expand to other countries very soon. 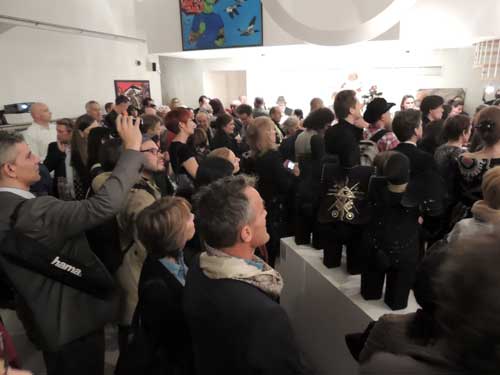 After the event the ICLA representatives retired to a nearby bar with some of the event organisers. It was good to find that we had a great deal in common and a shared appreciation of the dangers posed by sharia. It was a pleasure to be in the presence of so many people who are committed to the cause and principles of freedom.

We hope that Passion for Freedom will continue to attract increasing numbers of supporters and increasing levels of influence. It is a light in a world of increasing darkness. ICLA congratulates the organisers who have worked hard to make this important event and hope that many people will get the opportunity to see the works of art that are currently on display. It is much better to see the works in person than look at the few tiny images that are visible in this article.

Tomorrow, Tuesday 6 November, the focus of the festival will be a special screening of “MyBrothertheIslamist” by Robb Leech.