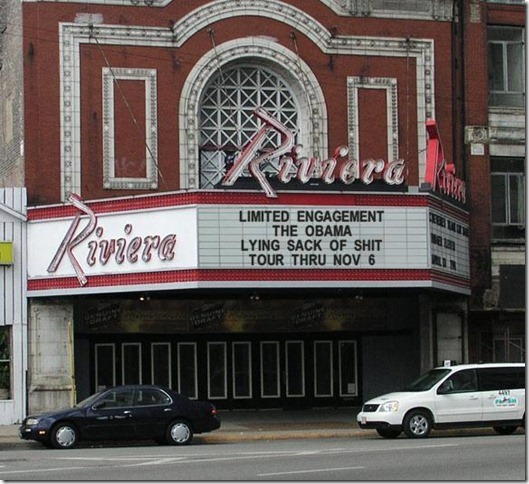 The Riviera Theatre is in Chicago, Ill

Question of the day:

Do you think more republicans will vote for Romney this year than voted for McCain in 2008?

Do you think more democrats will vote for Obama than voted for him in 2008?

Do you think more independents will vote for Obama this time? For Romney?

I find the polling data starkly at odds with the external data. Attendance at campaign events is massively different. Perceptible enthusiasm is radically different.

I’ve also heard from any number of people who voted for Obama in 2008 who are having the most acute case of buyer’s remorse I’ve ever seen. Case in point: my wife’s relatives — all of them — voted for Obama. She talked to them on the phone yesterday. Every single one of them a) expressed the sentiment that Obama scares the hell ouf of them, b) is voting for Romney.

So, what are the odds that 100% of last election’s Obama voters are voting for him this time? Going only by people I’ve talked to, and whom my wife has talked to, he’s lost a substantial portion of that vote.

Romney? Well, at minimum I expect him to carry the same states McCain took in 2008, those being the same folks who would vote for an old shoe over Obama. And then there are the states whose economies are directly threatened by an Obama administration. While Romney may not capture all of those, I expect he’ll pick up a couple of those. And then there are those states whose externals — attendance at rallies — shows a startling swing toward Romney, and I expect him to pick up one or two of those.

What I find confounding is how both sets of pundits are williing to confer any authority at all on the polls. The average poll sampling skew is Democrat +7, some as high as +11, with the conventional wisdom being that 2010 was a fluke and nothing that happened then will be reflected in today’s turnout.

Speaking now as a data analyst, I have to say there is no effing way the numbers can line up the way the polling data would indicate.

The only wild card is voting fraud. In Philly, the Black Panthers have shown up yet again to intimidate voters, and the head of elections had all the Republican poll watchers ejected, requiring an emergency court order to have them reinstated (after a period of time long enough to stuff the ballot boxes).

Without voter fraud, this is a cake walk for Romney. The only way this can be taken from him is fraud.

Yes, I expect Romney to win. What worries me is that he may not win by a large enough margin to avoid Minnesota-style recounts.

Obama wants “revenge.” Valerie Jarrett is promising “payback.” When someone who *owned* the political process for the first two years and who held the Senate and White House for all four years of this administration still speaks in terms of “revenge” and “payback” you have to realize that the integrity of the process means little to them: as long as they win, anything goes.

In spite of all that, I believe Romney wins.

3 thoughts on “Betting on Romney”