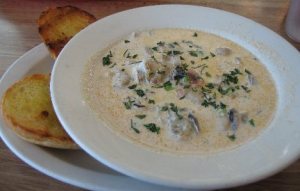 My folks, bless their twisted taste buds, had a Thanksgiving Eve tradition, and still do; they’d serve oyster stew for dinner. I’m not sure how anyone can look at that stuff much less eat it; but they let us off by serving tomato soup instead, not my favorite either, but at least I could look at it.

After dinner on Thanksgiving Eve we were instructed to write out our Christmas wish lists so Santa could look at them on his way through town prior to being in the parade the next day. You think that sounds hokey; wait ‘till you hear the rest of what we bought into, getting ahead of myself.

Imagine a young boy sitting at the table with the power to ask for the desires of his heart from Santa, any toy that had been advertized was at my finger tips and all that was required was my writing it down so the letters were legible; no small feat if you’ve seen my hand writing.

With a little help and coaching my list was completed, a huge smile as visions of …wait a moment, that part was reserved for Christmas Eve. We’d place our lists on a plate in the middle of the dining room table so Santa could read them and have a better idea how to pack his bag in a few weeks. 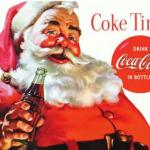 Coca-Cola made a fortune showing Santa holding a bottle of Coke; but truth be known, we always used a glass of milk and some home made gingerbread cookies to bribe the jolly old man. Off to bed we scurried knowing that the quicker we were off to sleep the more time Santa would have to read our wish lists.

In the morning we could hardly contain our excitement as we went to the dining room table to see if Santa had come. The evidence was there, enough to prove in any court of law; the cookies and milk had been enjoyed. More importantly, there on the plate where we’d left our wish lists; all that remained were ashes where Santa’s magic green mittens had incinerated them, a small scorch mark left in the center of the plate.

Thanksgiving was more than just a time to enjoy a great meal with my family; it marked the first day of the Christmas Season. We’d watch the Macy’s parade on television and anxiously waited until the very end when Santa waved from his sleigh; that was the best part of the parade.

I talked with mom this morning and she told me they were going to have their traditional oyster stew; but they would have it on Thanksgiving night. I reminded her in a respectful manner how she’d gotten it off by one day; oyster stew was for Thanksgiving Eve. I guess with us kids all grown up and on our own they can save the tomato soup for some other evening.

With everyone concerned about being politically correct, zero tolerance and all that nonsense; telling your children about the mysteries of Santa Claus might get you in trouble. I can see Children’s Protective Service workers knocking on the door, collecting up the ashes as evidence proving the environment for raising children was dangerous. 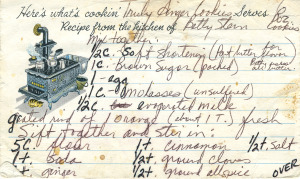 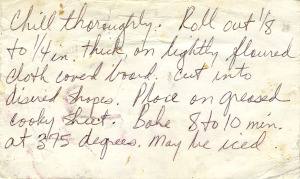 Here’s your Christmas Bonus, a copy of mom’s hand written gingerbread cookie recipe. It will be up to you to decipher it; that’s my official disclaimer. Be aware, for years this recipe was kept in a vault next to the Presidents’ Book of Secrets; that’s how valuable this information is.