I refrained from posting yesterday because matters were so much in flux. It felt — with good reason — as if the situation would have changed before most of my readers even had a chance to see what I had written. And boy, has that been the case!

Before speaking about the events of today, I want to look back, briefly, to what happened yesterday:

The day began with rumors coming out of Egypt about a ceasefire between Hamas and Israel that would be announced at 9 PM. Not so fast, Mark Regev, the prime minister’s spokesman said, we have items still to be worked out. Going on 9 PM, Egypt declared that there would be a ceasefire announcement at midnight.

Eventually that announcement fizzled as well, as Prime Minister Netanyahu declared there was no ceasefire agreement.

I, and many many other Israelis, breathed a sigh of relief. For yesterday was a horrendous day, with over 100 rockets launched at us. A day when many Israelis suffered, and two, including a soldier, Yosef Fartuk, aged 18, died. When many buildings were hit and in some cases demolished.

A rocket was aimed at Jerusalem but missed its mark.

And a high-powered Iranian-made Fajr missile, undoubtedly aimed at Tel Aviv, hit instead in Rishon Letzion, where it took the two top floors off a building. 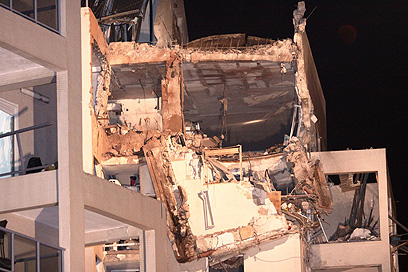 Thankfully, residents of the building were not home when the missile hit.

All in all, the mood of the nation was very tense, and very pained. Worried, and definitely not conciliatory. There was a sense of relief in the air when it became clear that the ceasefire agreement had not been signed — residents in the south had been demonstrating against that ceasefire.

With this there was a high level of anxious speculation as to what would come next regarding what was assumed to be the inevitable ground operation.

Israel had taken out most of the terrorist sites that could be reached by plane without heavy civilian causalities, but this did not mean all were taken out: Remaining sites would need to be accessed from the ground.

In the evening, Netanyahu released a statement that sounded good:

“Our hand is outstretched in peace to those of our neighbors who want to make peace with us, and the other hand is firmly grasping the sword of David against those who wish to uproot us from this country.”
~~~~~~~~~~

Then, last night, Hillary Clinton came to town. Uh oh. It was expected that she was here for arm-twisting, to “facilitate” that ceasefire.

But Netanyahu stepped up with her to make a public statement: He would do whatever was necessary, he declared, to defend the people of Israel. OK!

Clinton’s comment angered me: Because the US cares about the security of Israel, she said, she had come to help restore quiet as quickly as possible. I cannot emphasize enough the fact that “quiet” — when we are dealing with a terrorist entity — is not necessarily what is in Israel’s best interest from a security perspective. Sometimes that entity needs to be weakened severely, at the least. Sometimes fear has to be instilled in the hearts of terrorists, and their capacity to do harm has to be reduced.

With statements such as this, Clinton and Obama ignore the central reality of Hamas, and instead advance the pretense that everyone can just get along if there’s good effort.

Following this, Netanyahu went into private consultation with Clinton. I waited late last night for news that she had coerced that ceasefire agreement from our prime minister, but it didn’t happen. And in the morning she left.

What also happened this morning is that there was an explosion on a bus in Tel Aviv. It wasn’t a suicide bombing, and thank Heaven, it wasn’t strong enough to kill, although over 20 people were injured. Apparently terrorists planted an explosive on the bus and walked off.

What was chilling is that this happened right outside the Kiryah, the military operational headquarters of the country. This was taken as a clear message, and the expectation that a ground operation was about to start grew even stronger. Later, Al Aksa Brigades — which is a wing of Fatah — took credit for the explosion, although it is still unclear as to what group actually initiated it.

And while we were all waiting for the announcement that the ground war in Gaza had begun, the bomb shell hit:

From Jerusalem, Clinton had gone to Cairo. And there in Egypt she held a press conference with Egyptian Foreign Minister Mohamed Kamel Amr announcing a ceasefire between Hamas and Israel. 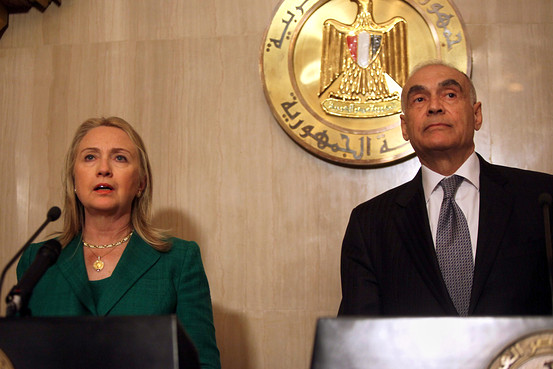 What we subsequently learned was that Obama had personally called Netanyahu and “advised” him to accept this ceasefire. What was said by Obama to Netanyahu is something we are not likely to ever know, but the enormous likelihood of coercion, subtle or not-so-subtle, stares us in the face.

What must be noted is that Netanyahu simply said he was willing to give this a chance and that further military action may yet be necessary — this was indicated in the statement released from his office and is reported to have been what he told the president.

When I learned about the ceasefire, my take was something like this:

Netanyahu said to Clinton, you want a ceasefire? I first need more involvement by the US and Egypt with regard to guaranteeing that ceasefire and inhibiting the smuggling that would allow Hamas to rearm.

Hillary then took herself to the very needy Morsi and twisted his arm. It was even easier to do than it might have been because there is anti-Morsi sentiment in Congress. And Morsi would have agreed.

That this was Netanyahu’s position was more than just a guess on my part. There were several allusions in the press to US and Egyptian involvement, particularly with stopping smuggling.

The Israel Project, which routinely represents the government position, had this to say today:

“These events also underscore the need to ensure that Hamas and other Gaza based terror groups are unable to smuggle weapons into Gaza. By playing an active role in helping achieve this ceasefire, Egypt and the US will clearly have to play a role in ensuring that happens.” (Emphasis added)

When the terms of the ceasefire were made public, I understood what total nonsense this was. Aside from implementation procedures, all it says is:

a. Israel shall stop all hostilities on the Gaza Strip land, sea and air including incursions and targeting of individuals.

b. All Palestinian factions shall stop all hostilities from the Gaza Strip against Israel, including rocket attacks, and attacks along the border.

c. Opening the crossings and facilitating the movement of people and transfer of goods, and refraining from restricting residents free movement, and targeting residents in border areas and procedures of implementation shall be dealt with after 24 hours from the start of the ceasefire.

d. Other matters as may be requested shall be addressed.

Under implementation, there is the following:

This says zero about US or Egyptian responsibility to stop smuggling. Item “d” is completely and totally worthless and means nothing.

My assumption had been that one of two situations prevailed: Either Netanyahu was trying to secure some solid assistance with regard to sustaining the ceasefire — attempting to shift the onus to the US and Egypt.

Or, he was playing a game: Knowing that this will not hold, he wanted to be able to point out that he had cooperated and tried, and that the US and Egypt had failed to sustain the ceasefire — so now he could hit hard.

Whatever the case, at least as far as the written agreement is concerned, there is nothing he can hold these countries to regarding their commitment to stop smuggling. Lovely statements by Obama don’t count. And as far as sustaining the ceasefire, it is only Egypt that is mentioned.

All of the analysis I wrote recently with regard to Morsi still holds. He caved to US demands because he needs Obama. But he has neither the will nor the capability to enforce the ceasefire or stop the smuggling on a sustained basis. Rest assured there will be some gestures at first, but no more than this.

Just six days ago (mentioning the Jewish state by name publicly for the first time), Morsi said that Israel’s “aggression” against Gaza was “unacceptable.” Now, with the ceasefire he made a similar statement, expressing satisfaction that Israel’s attacks would be halted. This is the man with whom Israel is now supposed to register the fact of Hamas violations.

That Obama selected this man, who is not remotely objective, to negotiate a ceasefire, and to assist in sustaining it, tells us a great deal. Obama has elevated the status of Morsi, a staunchly anti-Israel Islamist.

And Clinton? She has promoted this “diplomatic achievement” as a significant step in changing the nature of the region. Poppycock. A ceasefire agreement that is very weak and very nonspecific has been stitched together to bring temporary quiet. Nothing more.

The question that remains is how long is “temporary”? Most Israelis have little confidence that this will last long.

For me, perhaps the most significant question now is how Netanyahu will react. How serious will violations of the ceasefire have to be before he responds to them? Israel has a history of ignoring sporadic rocket launchings until the situation grows more intense. But now there’s a new catch:

Dr. Aaron Lerner of IMRA has pointed out that under the terms of this agreement, “the only thing that Israel can do in response to attacks is to file a complaint with Egypt…If Israel is attacked it would still be a violation of the agreement for Israel to respond. By the same token, if Israel saw terrorists in the middle of launching attacks against Israel it would be a violation for Israel to try to stop the terrorists from attacking.”

How bad will it have to be before the ceasefire is understood to have fallen apart completely?

Will Netanyahu be prepared to point out that he tried his best and that there is no cooperation on the other side? Or will he remain mum until the situation has escalated?