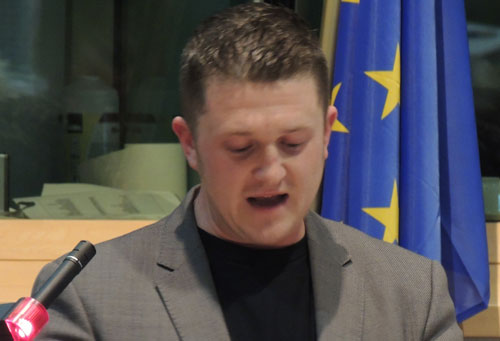 The International Civil Liberties Alliance (ICLA) is a human rights organisation that aims to uphold democracy, freedom and individual liberties. In its Mission Statement ICLA commits itself to campaign for the right to oppose sharia. There are many people who would argue that such a right is automatic in the West. Others would say that the right exists but that it is ‘rude’ to use it because it risks causing ‘offence’ or ‘hurt feelings’. Far from being an automatic right people have been demonised and slandered, they have lost their livelihoods, they have even ended up in prison for opposing sharia. As a result specific provision to protect this right is now essential in both national and international law.

(8) The Right to Oppose Sharia
Countering any attempts by Islamic leaders or organisations to implement Sharia, covertly or openly. Campaigning for the protection of individuals and organisations working to prevent the implementation of Sharia in our societies. This includes ensuring that law enforcement and courts deal fairly and robustly with threats and intimidation against citizens doing so, for such citizens are working in line with the European Court of Human Rights verdict of February 13th 2003:

“… the Court found that sharia was incompatible with the fundamental principles of democracy as set forth in the Convention. It considered that Sharia, which faithfully reflects the dogmas and divine rules laid down by religion, is stable and invariable. Principles such as pluralism in the political sphere or the constant evolution of public freedoms have no place in it.”

The leader of the English Defence League (EDL), Mr Stephen Lennon – better known as Tommy Robinson, today finds himself a resident of London’s Wandsworth Prison. As a country that pretends to be a free and democratic society the United Kingdom still feels to need to have a pretext for locking up dissidents. Could his imprisonment be the result of who he is rather than what he is alleged to have done? Mr Lennon has spoken out on subjects that powerful people do not want to be discussed. Is that the real reason why he is now behind bars in appalling conditions? Is this about his opposition to sharia? Opponents of sharia are persecuted in the United Kingdom – that is a fact!

In a country where council officials can stop someone being a foster carer on the basis of their political allegiances what lengths are those with power willing to go to in order to clamp down on dissent? The public can no longer be sure that those in positions of power are not abusing that power. Denials to the contrary are equivalent to those made by the boy who cried wolf.

We witness scandal after scandal that is glossed over or explained away with anyone complaining being labelled a conspiracy theorist or demonised in some other way. Even people involved with ICLA have been forced out of their jobs so we are aware of the way opposition to sharia is dealt with from the personal experiences of our own people. It is now impossible to know when powerful officials and the institutions that they control are telling the truth. The only way to ensure that anti-sharia activists are not discriminated against is for specific legislation to protect them.

For many years the Organisation of Islamic Cooperation (OIC) has been trying to destroy freedom of expression via its demands for a global blasphemy law. An OIC inspired global blasphemy law, whatever weasel words were used to justify it, would mean that pro sharia advocates would be encouraged and anti-sharia activists would be persecuted to an even greater degree. There would no longer be the need for the use of pretexts like those used to lock up Mr Lennon. In a world that is moving in the direction of theocratic tyranny, laws to protect anti-sharia dissidents are absolutely essential.

National governments in places like the UK have failed to confront the demands by the OIC to curtail freedom of speech. It is as if they want draconian laws to stifle free speech. People are already criminalised for thought crimes and this seems to get worse with each passing day. Efforts to restrict free speech only make suspicion of the powerful more acute – why do they want to shut people up?

To what extent is the current crackdown on dissent a case of the UK Government doing the bidding of the OIC? Is Mr Lennon now in a prison cell because of pressure applied from the OIC? We will never know because despite open government rhetoric government is conducted in secret.

Due to the context of a general crackdown against opposition to sharia in the United Kingdom ICLA is naturally suspicious of those who wield power in that country. We believe that it is for the British Government to prove beyond down that this is not the case. In the absence of such assurances and due to the commitments that we have to our own Mission Statement ICLA would like to put on record its endorsement of the Free Tommy Campaign which is based at FreeTommy.Info The British Government needs to prove that it does not have a policy of persecution against those who oppose sharia law in the United Kingdom.

One thought on “The Right To Oppose Sharia: The Case of Stephen Lennon”