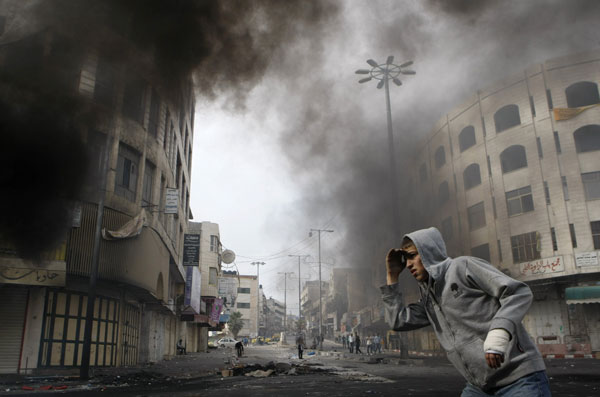 Every week on Monday morning, the Council and invited guests weigh in at the Watcher’s Forum with short takes on a major issue of the day. This week’s question: What’s Your Reaction To The Gaza ceasefire?

The Razor: I’m more sanguine about it than JoshuaPundit, and agree with Haaretz (paywalled at http://www.haaretz.com/news/diplomacy-defense/israel-s-pillar-of-defense-achieved-its-goals.premium-1.479674#) that Israel achieved its two strategic goals of reinstating the cease-fire with Hamas and stabilizing the peace with Egypt. Add in the whacking of a few senior Hamas leaders and the success of Iron Dome shooting down the rockets with the mild reaction of the cliché “Arab Street” and I believe it will be hard to paint Israel as the loser in this episode, although I’m sure the Leftist media will struggle to portray it that way.

Hamas was clearly acting as Iran’s proxy to draw attention away from its Syrian quagmire. What’s particularly interesting to me is the failure of Hezbollah to join the fray given its reliance on the mullahs in Teheran for funding. Syria is definitely draining the pond it swims in, and the quiet on Israel’s northern frontier says a lot, as does the relatively muted response in the Arab world. The protests in Egypt started as anger against the Morsi regime for failing to support Hamas against Israel and then brokering the peace, but they quickly morphed into protests against the regime’s power grab that has given me a serious case of ear worm with The Who’s classic “Won’t Get Fooled Again,” particularly the line “Meet the new boss, same as the old boss.” Obama clearly thinks he bought Morsi which I personally doubt; I just hope for America’s sake he stays bought.

But back to the topic, if the missiles begin to sail over the border, Israel can just whack another Hamas leader and the cycle will start again. Israel has clearly learned from its past episodes dealing with Hamas and in my view comes out of this episode stronger than it was when it went into it.

GrEaT sAtAn”S gIrLfRiEnD: Like being hit with a nerf baseball bat. You know something just happened yet are semi sorta unsure exactly what the heck it was.

At terrible risk of appearing to be a war monger, the Strip Cease Fire seems to only delay the inevitable clash betwixt Little Satan and the now illegit HAMAS regime (no elections in nigh unto a decade? Please). And to what end? A Lo Down Ho Down is looming as all of Little Satan”s Near Abroad begins to exhibit bloody borders – Syria, The Strip, Jordan.

Methinks next time – and there will be a next time – Little Satan should strike 1st and quiz later with a ground assault – faster and heavier than Cast Lead. Easier said than done no doubt – calling up reserves is a pretty obvious signal and alerts friends, frenemies and enemies what may be unfolding.

As Caroline Glick recently LOL”d about doing the Strip:

“To accomplish this Israel will need to invade Gaza and remain in place. It will have to kill or imprison thousands of terrorists, send thousands more packing for Sinai, and then spend years patrolling the streets of Gaza and arresting terrorists just as it does today in Judea and Samaria.”

JoshuaPundit: I think The Razor already linked to my basic feelings above about this.

Israel was presented by President Obama with two bad choices and simply chose the less bad one, which amounts to the status quo ante bellum… except that a good part of Hamas’ Iranian missile armory was destroyed… for now. There will be a next round, and the Israelis know it, which is why so many of them opposed this ceasefire even though their loved ones’ lives were on the line. You can’t appreciate what a people’s army the IDF is unless you’ve seen first hand how Israelis react to it.

Another part of the fallout that isn’t appreciated here (and certainly not by our president) is the way this is going to be seen as a victory over the Jews in the Arab world. It will make Israel’s enemies a great deal bolder next time.

It also had an effect on our relationship not only with Israel but with what’s left of our other allies in the region. They just received fresh evidence that America is not to be depended upon. According to my sources, the Israeli government is particularly livid over what went down.

They had a similar experience with France on the eve of the ’67 war. Expect them to chart a much more independent course in the future, and to look for new allies, especially as their massive oil and gas discoveries come online next year. That’s not so good for America on a lot of levels.

The Noisy Room: My reaction to the Gaza ceasefire has several facets. My initial response was that it was a horrible mistake militarily. But I realize, that there may be much more to Netanyahu’s response than meets the eye. I am sure he has a strategy that is not obviously apparent.

Evidently he was strong armed into a Hobson’s Choice. Israel wanted to invade with ground forces and completely eliminate Hamas from Gaza. This sounds like a fine plan… enter the US and Egyptian meddlers. They were okay with the original plan, but they wanted to attach a rider. Upon succeeding in this strategy, Israel was to turn over the Gaza Strip to the Palestinian Authority. Additionally, Obama insisted that Israel declare a Palestinian State in Gaza, including also Judea and Samaria, which of course would necessitate removing all Israeli citizens from those areas. And the whole shooting match would be turned over to Abbas. So, in summary, “Go ahead and win this, as long as you take this poison pill too.”

The second option Israel is offered is a hudna, a temporary ceasefire and fragile peace, but Obama and Morsi are calling on Israel to stop all attacks on Gaza, including targeting of individuals. They are also requiring all Palestinian factions to stop hostilities against Israel from Gaza, including rocket fire and attacks along the border. But this won’t stop smaller factions from their campaign of Islamic terror. Israel is going to relax border restrictions with Gaza, which means that weapons smuggling will step up in intensity. Hamas has blatantly stated that they will keep arming their forces.

This is only a brief reprieve. War with Iran and Hamas is coming. Israel may be regrouping for the fight to come. I really hope they’ve got some card up their sleeve no one has seen yet. Otherwise they are in a world of hurt and the pain is just beginning. The US will not have their back and Israel will have to fight alone. At least they will have God on their side.

The Independent Sentinel: My reaction is that this has been a win for terrorists. They now have a better sense of what Israel can do and our President appeared to be more terrorist appeaser than Israel supporter.

Iran and Hamas get to talk about making Israel scream in pain. Egypt, obviously not much of a help in the negotiations, was praised by the administration for being much of a help.

Morsi responded to the accolades by making himself into a dictator – it’s temporary he claims.

Hamas won’t stop making and smuggling weapons though the daily missiles being lobbed into southern Israel have stopped for now. We now know their missiles have a longer reach.

In the aftermath, protests against Israel are taking place throughout the world.

Israel seems to stand alone and I am very concerned for Israel and the US.

Oh, but we have peace, don’t we? Only until Gaza replenishes their weapons. Perhaps they are really preparing, along with others, for a massive attack on Israel if she tries to bomb Iran’s nuclear sites.

Other than that, Hillary and Barack did a fine job.

Rhymes With Right: What do I think of this truce? Frankly, I think it is ill-advised and likely inimical to the best interests of Israel — but then again, hasn’t every truce with terrorists that has ever been forced on Israel by those who are loath to allow it to defend itself from those who would destroy the island of civilization in the midst of the Islamic world?

For those who think I am being too harsh, let’s consider things which have happened in just these last few days.

1) The Egyptian leader — anointed as the guarantor of peace by Barack Obama — has made himself the de facto dictator of his country, and is now facing massive unrest as a segment of his people rise up in protest. How long will he stay in power? Who knows — and is he likely to be the sort of leader who will, in fact, carry out his own commitments to rein in Hamas?

2) Hamas itself has continued with its bellicose statements regarding its eventual intention of destroying the Jews. Does this sound like a peace partner likely to honor the truce? When one considers the first violation came within an hour of the truce going into effect, the answer should be obvious.

3) Iran is already sending vessels ready to resupply Hamas with newer, better weapons to fight Israel — consistent with the drumbeat of genocidal anti-Semitism that has been part and parcel of the Islamic Republic’s rhetoric for the last thirty years.

4) For all Barack Obama mouthed the right words in support of Israel’s right to defend itself against Hamas, his track record is such that it is impossible to believe he will hold the Arabs’ feet to the fire regarding the terms of the truce — but will require Israel to observe every jot and tittle of it. In this he is little different from all his predecessors, but his previous hostility towards Israel leads me to believe that he will not be so forgiving of Israel taking defensive action as have been previous presidents.

Israel should not have signed off on this agreement — at least not until every political and military leader of Hamas was dead and Gaza swept clean of every weapon more advanced than a sling or a bow. And if that meant more casualties among the civilian population in Gaza, their blood would rightly be reckoned as being on the hands of the Hamas terrorists who chose to war with a neighbor that has for over six decades asked for nothing more than peaceful coexistence with its Arab neighbors. But as Israel is the only civilized participant in the conflict, its leaders felt obliged to exercise restraint — a policy which I fear will mean more innocent blood will flow in the streets of Israel when Hamas again renews its terror campaign.