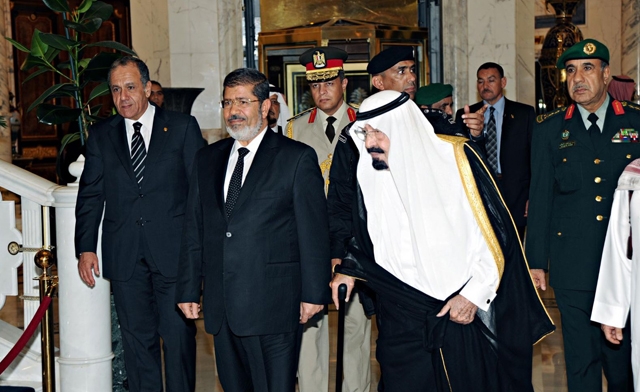 Mursi ended his first night in the Kingdom by heading to Mecca and performing Umrah. Reuters

President Morsi’s leadership is analogous to the pharaohs of ancient Egypt, at least in the eyes of his opposition figure ElBaradei. He meant it as an insult to Mr. Morsi in light of the President’s greed for power. Truthfully, it is an insult to world history, but no worse than claiming Mr. Morsi is a broker for peace in the Middle East or that his objective for Egypt is to fulfill the aspirations of the January, 2011 uprising.

Mr. Morsi’s November 22nd Amendment to Egypt’s constitution is illegitimate and concretes his authority. With it he places himself above Egyptian law and the legal system and grants himself the last word on his decrees. Morsi has unilaterally altered Egypt’s constitution to concentrate power in his own hands. This facilitates Egypt’s move in the direction of an Islamist Shariah state.

Mr. Morsi expects the Egyptian people and the world to believe that his recent power grab is temporary and that with it, his only intentions are to purge Mubarak remnants or keep them in check. This is unlikely given that he and his party have proven to be inveterate liars beginning with the statement made during the 2011 uprising that the Muslim Brotherhood had no political aspirations.

Perfectly timed and with the patience of a saint, Morsi made his move on the heels of the cease-fire between Israel and the Gaza terrorists. There were earlier power grabs by Morsi in the first one hundred days of his installment as President, but not as bold as this illegal act. Overstepping the bounds of his authority, he revised Egypt’s constitution to afford his office excessive power. It is an ominous signal — the death knell for democracy in Egypt.

Even though Morsi couches his reform in lofty democratic terms saying he has done this, “to protect Egypt and its people, deal with the members of the former regime with the utmost firmness and strength, establish a new legitimate constitution which lays crown pillars of good governance based upon the principles of freedom, justice and democracy,” the world and the Egyptian people see an autocrat. He is edging Egypt into something much worse than the Brotherhood-shunning regimes of Egypt’s past.

Already world response has been to deem Egypt unstable. The International Monetary Fund waits and watches not yet willing to release aid to Egypt. Inside the country, freedom fighters are furious with the President’s audacity and have reacted by burning local offices of the Muslim Brotherhood around the country and now gather in Tahrir Square for protests similar to January, 2011. However, Morsi has managed to impress the Arab-Muslim Umma and this is a huge accomplishment for him.

Mr. Morsi was elected with a mandate to demolish the former regime — eliminate important figures, tear down infrastructure and abolish corruption from state institutions –- as a necessary part of the responsibility and the promise to build democracy (beginning with social justice and human rights). Is he instead erecting the Islamist state for which he has been groomed to lead? Morsi’s democracy is merely a pretense readily exploited by him to garner power and control.

In his latest maneuver — his November 22 Constitutional Amendment — he carved out six strongholds on a course to strengthen his Brotherhood-backed Sharia agenda. Let’s examine his six items in the order written. President Morsi appears to devote his first matter of business to the Egyptian pro-democracy liberals and freedom fighters. He requires a reopening of investigations and a re-trial for those arrested earlier (but dismissed for lack of evidence) for the murders of freedom fighters during the uprising of 2011.

Is it due to Morsi’s deep regard for justice and his passion for democratic principles? Or is it just a shiny object to distract the populace from more significant issues like the drafting of Egypt’s new constitution with Sharia elements? Furthermore, reopening these cases advances his agenda to release Brotherhood members long under suspicion of crimes against the 2011 demonstrators.

Mr. Morsi’s second item renders absolute all his decisions stating that “all constitutional amendments, past and new laws, and previous decisions made by the President of the Republic since he took office in June 30, 2012 until the approval of a new constitution and election of new members of parliament are to be final and binding. They cannot be challenged by any means or by any judicial body.” Morsi removes all obstructions from his path.

His third item states that Attorney General, Abdel Meguid Mahmoud, is to be removed from office and replaced by one member of the Judiciary for a four year term chosen by the President. This is mandatory and takes effect immediately. Earlier in November Mahmoud refused to submit his resignation at Morsi’s request or to accept the position of envoy to the Holy See. Now Morsi fires Mahmoud by a constitutional amendment.

Item number four overrides Article 60 of the constitution, the amendment added by the Supreme Council of Armed Forces on March 30 of last year giving the Constitutional Assembly until December 13, 2012 to draft Egypt’s new constitution. Now Morsi extends the deadline for another two months into February.

The sixth and final item proclaims that the President of the Republic can take appropriate measures and any needed action to confront threats to the nation regarding national unity, safety of the nation and hindrances to the performance of the role of state institutions or similar events to the uprising of January, 2011. Here, Morsi reinstates the emergency law following in the footsteps of Mubarak (and Sadat and Nasser before him) with a regulation that could readily facilitate Sharia enforcement squads throughout the country.

President Morsi has placed himself above the law and silenced opposition voices. Food shortages, unemployment, rising prices, absence of police protection, production and manufacturing issues; all plague the country as the people await President Morsi’s first concerns to protect his own power and serve his party’s Islamic interests.

Already, Mr. Morsi is contradicting his new law which extends the deadline for the constitution draft. The reason for this is most likely to avoid another embarrassing clash with the Constitutional Court – a public relations disaster for him. He urges the Constitutional Assembly to have the draft written before December 2, at which time the Assembly automatically disbands. This also allows Mr. Morsi to publicly announce the date of the referendum before December 2 and to have the draft approved within two weeks by the people.

Most importantly, Mr. Morsi avoids another dreaded defeat by the judicial system because the Constitutional Court will no longer need to convene on this issue. The fate of the Constitutional Assembly is in the hands of Morsi now and not the Court.

Egypt’s new constitution draft affords the same level of power to Mr. Morsi and the executive office as he has right now. The people should reject it outright by refusing to take part in the referendum. If that won’t work, casting a “no” vote will.