Yesterday was a miniature version of the Great and Terrible Day of the Lord mentioned in the scriptures. Often times I’ve read the coupling of words, great and terrible, and contemplated their curious juxtaposition; yesterday I was given another bit of information as to how these words are supposed to work.

“And it came to pass that on the morrow they did go again to battle, and great and terrible was that day; nevertheless, they conquered not, and when the night came again they did rend the air with their cries, and their howlings, and their mournings, for the loss of the slain of their people.” Ether 15:17

The scripture referenced had to do with an ongoing war, combatants on the field of battle, a war which seemed to never end. Losses on both sides mounted to a degree and scope hard for the mind and heart to comprehend and yet the sun would rise each day and only those warriors with a resolve to come out on top would survive the next round.

Isn’t that a fairly good definition of life in general, having enough resolve to come out on top and survive the next round? 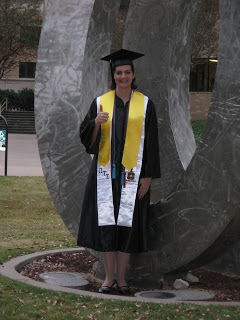 We attended my daughter’s graduation from Texas A&M University yesterday. Earning her degree with honors in Mechanical Engineering marked an important step in achieving her goals. Proud parents sitting in attendance, we listened as the governing body of professors and administrators shared thoughts on the moment.

One in particular began with an odd comment, “Let us have a moment of silence for this morning’s tragedy.” He said nothing else and everyone bowed in reverence to his suggestion, many to include myself, had no idea what had been referenced.

I quietly joked, “So Obama woke up this morning.” The lady in front of me muffled her laugh before too many could hear it. Clearly something had happened, but we were attending a graduation ceremony and what ever had happened would wait.

We later learned of a mass murder which included 20 kindergarten children, a senseless act of violence carried out by a sad excuse of a human being. I won’t go into details, suffice to say it was horrific; the pain and suffering will last long after the headlines have changed to a different topic.

Following these all too frequent acts of random violence there are always two discussions to hit the public square. If you think about it, they fall into the same areas we’ve been counseled to avoid, politics and religion; interesting how many dinner tables must remain silent, just an observation.

Progressives (those who hate the Constitution) among us use the opportunity to call for limiting the availability of guns of any type to individuals. They start by calling for a ban on all semi-automatic pistols and assault weapons. They won’t be happy until all weapons are confiscated and we live in a perfect Utopian state of peace; never mind that such a state of being is reserved for mankind only after this phase we call mortality.

The other discussions involve the basic question, “How can God permit such evil?” If God really cared He wouldn’t let crazy people go about killing and hurting innocent folks; but to murder little children is more than we can fathom. A few come to the conclusion that God is either dead, no longer cares since mankind has gone to hell in a hand basket or He never was to begin with; none of which are true, if you’re looking for an answer.

For what it’s worth; God didn’t permit or cause any of these acts of violence and the world is going to continue being a dangerous place. Those who disregard eternal laws (*) will continue to disregard these laws, laws created before the world was made,

“There is a law, irrevocably decreed in heaven before the foundations of this world, upon which all blessings are predicated —

And when we obtain any blessing from God, it is by obedience to that law upon which it is predicated.” Doctrine and Covenants 130:20-21

(*Substitute punishment for blessing to fit any scenario; the results are the same.)

When you consider mortality as a temporary state which permits individuals to learn about God’s laws, desires and His relationship with His children, then the hardships and heartaches caused by random acts of violence are a little more bearable. Family members will consider how fragile life is, how important the bonds we form with one another are, and if we are paying attention, how unimportant our petty differences are in the grand scheme of things. In other words, let’s all learn how to appreciate each other as we go about our daily lives.

We can’t, by outlawing evil, eliminate those who choose to do evil. We can; however, discipline our minds and hearts in such a way as to be better individuals. We’ll still get our hearts broken and at times our dreams will lie smashed upon the rocks just short of our goals; but we can and must get up, continue moving in the direction our Father in Heaven intended, toward that eternal being He wants us to become.

Maybe now you’ll have a better grasp how great and terrible work in unison. May we resolve to be better individuals and do things the Lord’s way is my prayer; in the name of Jesus Christ. Amen.