Now that our U.N. Ambassador Susan Rice has withdrawn her name from consideration for Secretary of State after the House Republicans thoroughly discredited her questionable ethics, ultra-liberal, pro-Muslim, communist community organizer Barack Hussein Obama has officially nominated Sen. John ‘Swiftboat’ Kerry for the job. The establishment Republicans, aka RINOs, are all breathing a sigh of relief that the worst person for the job won’t be getting it and one of their own Senate Country Club members will. I predicted this was all a smoke screen from the beginning to make the self-annointed hero of Vietnam the acceptable choice.

Someone has posted a petition within the last few days on the White House web page We The People, to remove Kerry from this consideration. It doesn’t go far enough to describe how un-American, anti-military John Kerry really is.

Withdraw John Kerry from Consideration for Secretary of State

In 1971 John Kerry gave false testimony about U.S. soldiers in Viet Nam and single-handedly did more harm to our POWs and returning veterans than any other person in the history of the U.S. He is a thief of stolen valor who has worked his entire career to undermine our military. He referred to American troops serving honorably in Iraq and Afghanistan as terrorists. It is an insult to every member of our armed forces and every American veteran to nominate Mr. Kerry to the position of Secretary of State. He has been a dismal representative of our foreign policy for over four decades and has often worked directly against the interests of the American people. We have every reason to believe that he will continue his traitorous, anti-American policies if confirmed as Secretary of State.
Created: Dec 28, 2012

WND.com does a good job of filling in the missing pieces on John Kerry.

Sen. John Kerry in 1971 gave “false testimony about U.S. soldiers in Viet Nam and single-handedly did more harm to our POWS and returning veterans than any other person the history of the U.S.,” according to a new White House petition.

In 2004, he lost the race for the presidency with the release of the book “Unfit for Command: Swift Boat Veterans Speak Out Against John Kerry,” which cited witnesses to his actions.

But Barack Obama now has nominated Kerry to be secretary of state, a position that will influence subsequent generations of troops he blasted as rapists and assassins who “cut off heads, taped wires … to human genitals and turned up the power, cut off limbs, shot at civilians, raced villages, shot cattle and dogs for fun, poisoned food stocks.”

This is what I wrote on the subject early last month. It is worth repeating. I called it a magic act because what was going on in Washington was the same kind of deception the magician uses to distract his audience.

The art of distraction, keeping the spotlight off Sen. John Kerry and his quest for Secretary of State.

We are all watching another Washington, D.C. magic act. The magician waves his left hand to draw your attention while he sets up the next trick with his other hand. The Republicans are mesmerized by the act being played before them and cannot see what is about to happen next. U.N. Ambassador Susan Rice is being set up to be the worst possible candidate for replacing Hillary Clinton as the new Secretary of State, and the Republicans are gobbling it up. When it is all over we will see that Sen. John Kerry, the Swiftboat hero of Vietnam, the same John Kerry who awarded himself three Purple Hearts so he could leave the battlefield and come home to protest the war and accuse his fellow soldiers of killing women and children, will be the second best choice to be our next Secretary of State. And the Republican Senators, like John McCain, who once said about then Sen. Barack Hussein Obama, he could not say anything bad about a fellow member of the Senate, will voice a sigh of relief when they accept John Kerry as the lesser-of-two-evils. It is somewhat incongruous to realize that today, Sen. John Kerry occupies the position of Chairman of the Senate Foreign Relations Committee, the very body that launched his political career in 1971.

John Kerry’s political career was launched in the U.S. Senate in the Committee on Foreign Relations on April 22, 1971 when he was invited to appear as a representative of the left wing group Vietnam Veterans Against the War. The testimony Kerry gave accused his fellow American troops of blatantly committing war crimes against the civilian population of Vietnam. He was congratulated for his work by leading liberals on the Senate committee. 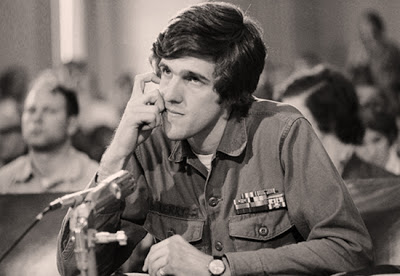 And today, as WND.com points out from a story in the Chicago Sun-Times, Hillary Clinton would rather see Sen. John Kerry become her replacement. Of course, John Kerry is more liberal than Susan Rice. And he isn’t involved in any questionable business practices like Susan Rice. He earned his millions by marrying rich women. And he got his start in politics by accusing his fellow soldiers of horrible crimes. Nothing like climbing over your buddies to get ahead. Oh, and he is friends with Jane Fonda and they spoke at anti-war rallies. 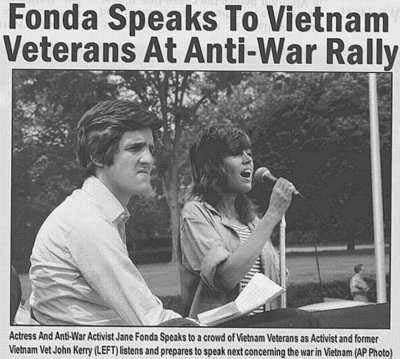 And as for the rest of us, we have been suckered once again. Can you imagine what John Kerry would be like as Secretary of State? Those few allies that we have left in the world must be having nightmares. He might even appoint his old friend Jane as his deputy. Why not, she would fit into the Obama administration perfectly because she was once married to a communist.

Happy New Year. The birds of a feather are all flocking together. Now we will wait for the confirmation hearings in the Senate and the expected applause Kerry gets from fellow liberals like RINO Senator John McCain who once said in his 2008 campaign against Barack Hussein Obama, “I will not say anything bad about a fellow member of the Senate.” No, never, not even when the fate of your country is at stake. John McCain ought to know a lot about being a ‘patriot’ as my post revealed some unpleasant facts about his tour in Vietnam.

3 thoughts on “The smoke screen has lifted. Sen. John Kerry officially nominated for Secretary of State.”