In the aftermath of the tragedy that took place at the Sandy Hook Elementary School shooting in Newtown, Connecticut and the movie theater shooting in Aurora, Colorado our liberal politicians have all jumped on the bandwagon of Public Safety and cried that we must enact stricter gun control for the sake of our school children and the general population. Crocodile tears aside and damn the Constitution, the liberals have found the motivation they always wanted to justify disarming America. Now, the liberals face two other obstacles to their unquestioning reign of totalitarian government: the Internet and talk radio. Will their next dire catastrophe justify suspending cell phones and texting, too? Only time will tell. Over the decades the liberals have taken over the education process and turned our schools, colleges and universities into pro-Democrat, pro-socialist indoctrination centers, they have taken over the news media and turned virtually all of our newspapers and television news into a one-sided state run news media for non-stop propaganda. They have taken over the entertainment industry for the same purpose to constantly bash, malign and denigrate everything conservative and good about America while praising the attributes of everything evil. Now the pots that have been on the fire for so long are ready to boil and the cooks are feverishly dashing from one cause to another.

Without the appearance of anything that resembles investigative journalism the shooters in Aurora and Newtown and elsewhere have been portrayed as just people who had access to guns. Never mind that every one of them had some form of mental illness and were all taking some brand of anti-psychotic drugs. David Kupelian wrote an excellent piece of research on WND.com that documents the drug connection every one of the mass shooters has had in the last 25 years. He showed where in 1999 Columbine mass-killer Eric Harris was taking Luvox; Patrick Purdy, who went on a schoolyard shooting rampage in Stockton, California “which became the catalyst for the original legislative frenzy to ban “semiautomatic assault weapons” in 1989, had been on Amitriptyline, an antidepressant, as well as the anti-psychotic drug Thorazine; Kip Kinkel, 15, who murdered his parents in 1998 and the next day went to his school, Thurston High in Springfield, Ore., and opened fire on his classmates, killing two and wounding 22 others, had been prescribed both Prozac and Ritalin. These are just to quote a few. Read the entire article on the details of all of the 11 mass murderers in his article The giant, gaping hole in Sandy Hook reporting http://www.wnd.com/2013/01/the-giant-gaping-hole-in-sandy-hook-reporting.

So today we read about two new threats to our society coming from the Internet and wonder if these threats will be used as another catalyst to restrict this unfettered source of conservative news. The Dept. of Homeland Security issued a warning about a possible flaw in the browser add-on called Java that makes every user susceptible to identity theft and malicious code invasion. Homeland Security advised everyone to uninstall or disable Java for their own protection. And a lesser known or understood threat comes in another news story from Google about a fraudulent Certificate Authority (CA). Fox News reported this story from TechNewsDaily, a TechMediaNetwork company today:

The single mistake that put the entire Internet at risk
By Ben Weitzenkorn
Published January 04, 2013
TechNewsDaily

A digital certificate for .google.com domains has been blocked by Google, Mozilla and Microsoft after a Turkish certificate authority (CA) incorrectly provided it to two other Turkish organizations who are unauthorized for the privileges that certificate affords — a mistake that put virtually everyone that uses the Internet at risk.

On Christmas, Google discovered that a CA called TURKTRUST was responsible for putting the certificate in the wrong hands.

“In response, we updated Chrome’s certificate revocation metadata on December 25 to block that intermediate CA,” Google software engineer Adam Langley wrote on the company’s Security Blog. “TURKTRUST told us that based on our information, they discovered that in August 2011 they had mistakenly issued two intermediate CA certificates.”

Intermediate certificates grant issuing power to whomever has it, Kaspersky’s Threatpost blog reported. This mistake puts virtually everyone that uses the Internet at risk for fraud, data loss or identity theft.

It’s not known if the unauthorized certificates were used to carry out any attacks; however, an attacker with the certificate in hand could pretend to be any domain, gain victims’ trust, infect their machine with malicious code, collect identifiable information or steal banking logins — the horrific possibilities are pretty much endless.

While the announcement from Homeland Security may also serve the purpose of boosting their questionable credibility in the war on terrorism, a war in which they have retreated from the responsibility of identifying who the real terrorists are, it does set the groundwork for creating another public scare. Just as the frightening news about cell phones causing brain cancer did. Of course, no one ever mentions how excess use of these devices adds to the problem. Public Safety is under a constant threat from every direction and we must all fold up into a fetal position and pray that our government leaders will fix the problem. The liberal mentality constantly reminds us that the only solution to combat evil, or as they are fond of saying, misguided individuals, is to give up our freedom and liberty. Thanks to these same liberals who have rewritten our history books we are never reminded of the inspired words of wisdom our Founding Fathers gave us that those who give up essential liberty for security, deserve neither and wind up with none. There is nothing new about the way these mindless idiots have been spreading fear in the name of Public safety. Case in point, the OSHA Cowboy. Remember this one from the 1970’s when the Occupational Safety and Health Administration issued their thousand-page rules to keep every worker safe on their job. 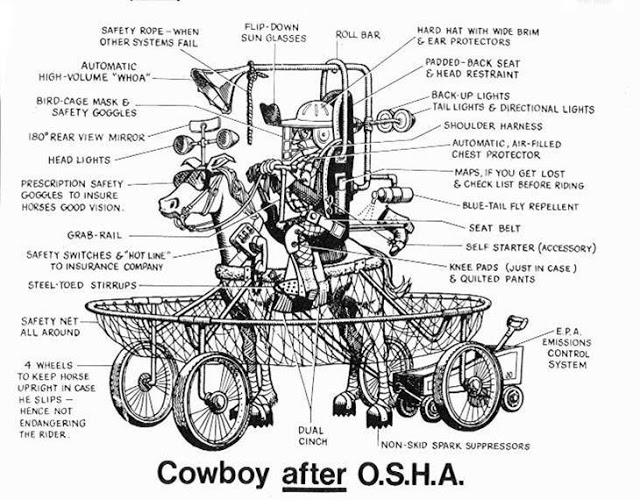 I wonder what new rules they will come up with to protect our school children? Bet it will involve anything but providing a means for self-defense in the hands of our teachers and school administrators. Maybe they will tighten the rules on safety caps on medicine bottles.