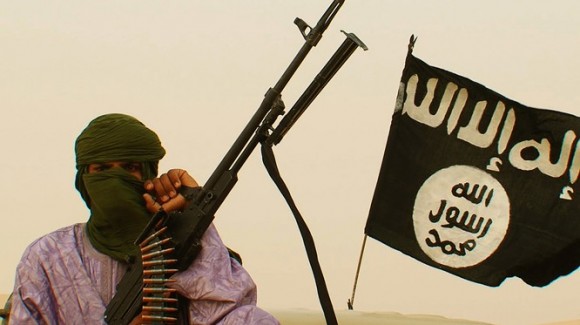 A major Islamist terrorist threat has emerged in Africa, and Al Jazeera is right in the middle of it, as usual. President Obama is largely AWOL, so the left-wing, socialist president of France has taken the lead and is committing military forces to stopping the threat.

Playing a familiar role, Al Jazeera has been airing sympathetic coverage about the Muslim terrorists and running “exclusive” interviews with terrorist leaders from Al-Qaeda in the Islamic Maghreb (AQIM), whose symbol is an AK-47 rifle and a black flag rising from the globe.

President Obama on Wednesday held a news conference about “gun violence” in the U.S. but has been slow to do anything about the violence and terrorism that threatens Africa.

The latest development is that the Obama Administration will support counterterror operations by the French forces in the West African country. But no U.S. troops are being committed. The U.S. can’t or won’t do more because of massive U.S. defense cuts engineered by Obama.

In a statement, Rep. Ed Royce (R-CA), chairman of the House Foreign Affairs Committee, said the main Islamist group, AQIM, and its offshoots “have been conducting regular kidnappings for years—financing much of its operations through ransoms, earning millions.” He said, “The network has planted deep roots in Europe. In recent years, cells have been broken up by authorities in France, Germany, Italy, Spain and Switzerland. In Mali, its brethren are imposing the strictest interpretation of Islamic law—banning music and chopping off limbs.”

AQIM has intensified their terrorist attacks against a weak Mali government and just seized about 40 foreign hostages, including several Americans, at a gas field in Algeria. The Algerian government has mounted a raid to free them.

But Al Jazeera has run an article on their “gentle” side and how they are meeting the needs of the population. The Al Jazeera story, headlined, “Mali: The ‘gentle’ face of al-Qaeda,” was picked up by The Huffington Post, the most-read online news site in the world.

In the channel’s “exclusive report from inside northern Mali,” Al Jazeera English reporter May Ying Welsh said the terrorists “are playing the role of humanitarians” by providing food to local people.

While the word “gentle” is in quotes, as if it comes from some objective observer, the story is sympathetic to the terrorists and critical of the “foreign intervention” that is needed to stop them.

One of the photos is captioned, “The Mujahideen distribute charity in hospitals and slums.”

Another is captioned, “Al-Qaeda in the Islamic Maghreb calls for preserving the territorial integrity of Mali.”

Andrew Bostom, author of Sharia versus Freedom—The Legacy of Islamic Totalitarianism, notes Al-Jazeera’s “continued grotesque supportive propaganda regarding Al-Qaeda” by citing that “puff piece” for the Mali terrorists. It is part of a pattern by this “terror TV” channel that goes back to the days of Osama bin Laden and his “exclusive” interviews with the channel’s correspondents, one of whom, Tayseer Alouni, turned out to be an al Qaeda operative.

Rather than being gentle humanitarians, Bostom calls the al Qaeda members “butchers and thugs,” a more accurate description.

In the Mali case, once again, we find the channel has obtained an “exclusive” interview with a Jihadist terrorist leader. This video, incidentally, was provided by Al Jazeera English, supposedly the more moderate of the channels being funded by the pro-Jihadist regime in Qatar. Another video which aired on the Arabic version of Al Jazeera included “exclusive” interviews of some of the Western hostages held by the terrorist group.

The media watchdog asks, “What kind of sick maniac would actually suggest that Al Qaeda has a ‘gentle face’? Answer: (1) The senior editors at HuffPost, who sourced the story from (2) Al Qaeda’s favorite ‘news’ service, Al Jazeera.”

Huff Watch says The Huffington Post also hired a former producer for Al Jazeera “to whip up hatred against Israel, and act as a shill for Iran and Hamas.”

While this may sound harsh, Dovid Efune, the editor of the Algemeiner Newspaper and director of the Gershon Jacobson Foundation, says that he had his own “surprising” experience with the site during an appearance on Huffington Post Live (HuffPost Live), their new online streaming TV station that features the former Al Jazeera producer Ahmed Shihab-Eldin as a host.

Efune’s article, “People like Ahmed Shihab-Eldin are Destroying Huffington Post Live,” says Shihab-Eldin argued that Iran, a state sponsor of terrorism which has threatened the destruction of Israel, was actually being threatened by Israel, and “let’s try and put ourselves in their [Iranian] shoes.” Efune commented, “How the Huffington Post gets away with placing someone who vocally campaigns for this morally corrupt position in a role of senior responsibility, is simply beyond me.”

The “gentle” terrorists creating that turmoil must be laughing all the way to the bank while thanking Allah for Al Jazeera.