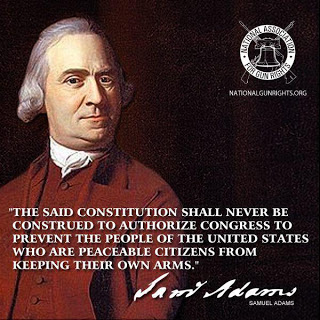 Obama stood in front of America today demanding an end to the means of violence, an end to military assault weapons and large capacity magazines as the solution. This is the same Obama who refuses to explain Fast & Furious, a means of equipping Mexican drug lords with these very same military style weapons. (Can you say hypocrisy?)

“To make a real and lasting difference, Congress, too, must act,” Obama said, speaking at a White House ceremony with school children and their parents. “And Congress must act soon.” 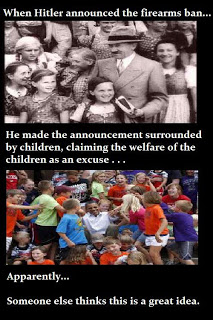 As a historical note, there’s been a continuous push to remove individual God-given rights to own and bear arms throughout the world. Hitler pushed the same tune not too many years ago; surrounded by little children to add to the knee jerk reaction. Hopefully there are enough reasoned minds who will make the connection.

There are factions among us who will stop at nothing to take away our 2nd Amendment rights and our sovereignty as a nation by turning over governance to the United Nations.

Back in September of 1961, the U.S. State Department came up with publication #7277, under the title, Freedom From War, subtitled, The United States Program for General and Complete Disarmament in a Peaceful World. In essence it proclaims how the United States has established a working plan to eventually disarm every individual in order to be in compliance with the United Nations plan to have a perfect Utopian World Order in which everyone is perfectly safe because the only folks who will have weapons will be United Nations Peace Keeping Forces. (I can hear Church Lady from Saturday Night Live, “Well, isn’t that special.”)

“This can only be achieved through the progressive strengthening of international institutions under the United Nations and by creating a United Nations Peace Force to enforce the peace as the disarmament process proceeds.”

Hillary Clinton was sent to the United Nations by Obama to act on our behalf at the U.N. Arms Trade Treaty, to let the world know that America had changed its path and wanted to be part of the disarmament process, that Obama would sign off on such a treaty. The agenda of the left has always included the destruction of our 2nd Amendment because as long as we remain sufficiently armed our government must treat us with respect. 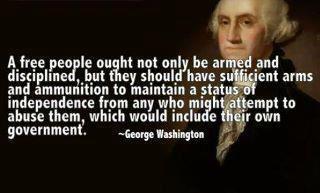 The right to own and bear arms was never intended to keep sportsman happy as so many would have us believe. The 2nd Amendment was very specific; it makes clear that individuals need to have sufficient force to keep government in check. That would mean having weapons equal to those used by those who would oppress them. The idea of removing military style weapons from our citizenry isn’t some magnificent gesture to “save the children;” not by any stretch of the imagination, it’s intended to minimize the individual’s ability to defend against tyranny.

Those “old white guys,” our Founding Fathers, were wise men of character with our best interests at the top of their writings. They wrote down for all mankind the most concise framework for government which would accommodate a righteous people. There’s nothing wrong with the plan they came up with; those in power now would rather not be confined by our Constitutional process. Think about this as you wonder, is there cause for concern?