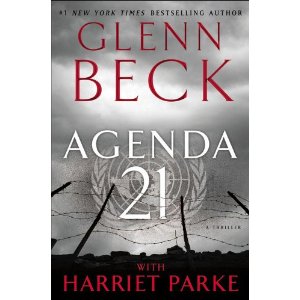 Purchase at Amazon.com or at Glenn Beck’s Site

I am a big fan of Glenn Beck’s books. His most recent, Agenda 21 by Glenn Beck with Harriet Parke, does not disappoint. The book is very well done, with a great plot and characters. It is realistic and disturbing. It’s a great read, but this first installment is a sobering look into what will transpire if we do not change course from the Progressive’s vision of our future.

The heroine of the story is Emmeline, who was about four years old when her parents were rounded up and placed in what can only be called an austere camp. A prison camp that is in the formation of a circle, where the homes are cinder block, with only a mat to sleep on and energy boards. Most were shot that would not go to the camps – some escaped and are referred to as the ‘shadow people.’ All tenants must earn their keep by producing energy for the collective. Producing children is required and the mother never holds her child. The state takes them immediately. Pairing is assigned. Nature and authority are the only things revered in this world. Meals are two cubes a day. Non-production is rewarded with death.

Think it can’t happen? Think again… Agenda 21 is very real as has been written about on this blog many times and it is spreading across the US. The Progressive Marxist elites will not stop until we are stacked and packed in hovels or trailers. They will take the land for themselves to create more wealth with carbon credits while we sweat and toil for them in ghettos.

Agenda 21 is a look into where this road leads. The ending of the book brings hope and definitely leaves it open for a sequel. I would recommend this book to everyone I know. You can’t fight your enemy, if you don’t know your enemy. And this is not about animals and plants; it’s about power, control and money.

A final note… Make sure you read the end of the book which gives research and facts on Agenda 21 and how to fight it in your communities. This is the fight of our lives. Take the fight to the Progressives, don’t wait until it comes to your doorstep.

You can get a copy of Agenda 21 at Amazon.com or off Glenn Beck’s web site. You should get several copies. I can’t wait for the sequel. Beck does it again with the help of Harriet Parke. Fantastic!!!