*I miss my friend Dave Logan of ThirdWaveDave very deeply as I know Andrea does. He passed away recently from cancer and has left a very large hole in our lives. Today is a very melancholy remembrance day for his friends. 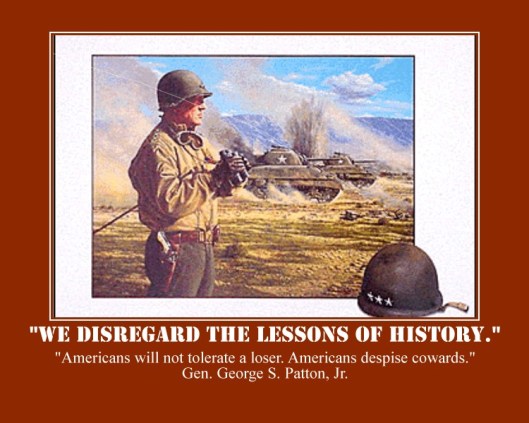 Five years ago today, I posted a birthday greeting to ThirdWaveDave, my ASK show producer and friend Dave Logan.

Titled “A Man’s Choice of Hero Defines Him”, it featured a photo of Gen. George S. Patton, Jr., a man whose outlook on life has impressed and inspired many, especially Dave.

Dave and I had many conversations about Patton, about the battles he fought in the war theater and back home in the political morass of Washington DC. Patton knew what it was to fight on many fronts for his men. It was unceasing. But unlike today’s so-called “leadership”, Patton readily took the challenges and risks, and went willingly where others only dream. He led and inspired by example. And his men loved him for it.

“Instead of the empty, generalized rhetoric of no substance often used by Eisenhower, Patton spoke to his men in simple, down to earth language that they understood. He told them truthful lessons he had learned that would keep them alive.

As he traveled throughout battle areas, he always took the time to speak to individual soldiers, squads, platoons, companies, regiments, divisions or whatever size group could be collected.

About the only difference in the context of these talks was that the smaller the unit, the more “tactical” the talk would be. Often he would just give his men some sound, common sense advice that they could follow in order to keep from being killed or maimed.” ~ Charles Province, historian

Somewhere in England on a day in early June 1944, it was the eve of Operation Overlord, the Allied invasion into France. Patton conducted his own “state of the union” address, gathering his men of the Third Army to clearly — and colorfully – prepare them for the battle that lay ahead. Not unlike the (bloodless) battles we now find ourselves in to protect and preserve our country from enemies determined to destroy it. What Gen. Patton told his men in that field that day is still relevant:

“All of the real heroes are not storybook combat fighters, either. Every single man in this Army plays a vital role.

Don’t ever let up. Don’t ever think that your job is unimportant. Every man has a job to do and he must do it. Every man is a vital link in the great chain.

What if every truck driver suddenly decided that he didn’t like the whine of those shells overhead, turned yellow, and jumped headlong into a ditch? The cowardly bastard could say, “Hell, they won’t miss me, just one man in thousands”.

But, what if every man thought that way? Where in the hell would we be now? What would our country, our loved ones, our homes, even the world, be like?

Just as the Greatest Generation fought for freedom against the Germans and the Japanese, our generation is again being called to defend a country under attack by dual enemies whose ideologies are anathema to the concept of liberty. Who will be the victor? The vanquished?

“I don’t want to get any messages saying, ‘I am holding my position.’ We are not holding a Godamned thing. Let the Germans do that. We are advancing constantly and we are not interested in holding onto anything…”

We are the hope of the world. Without us, the torch of liberty and freedom extinguishes, casting us all into the darkness of Marxist or Jihadist totalitarianism. Patton knew that, as did Ronald Reagan, another of Dave’s heroes. We are the bulwark, the fire line, the wall that separates us from the fires of Mordor.

As the men of Patton’s Third Army went into battle determined to win and perhaps to die to preserve our God-given rights, can we do no less? Consider Patton’s admonition to his men:

“There is one great thing that you men will all be able to say after this war is over and you are home once again.

You may be thankful that twenty years from now when you are sitting by the fireplace with your grandson on your knee and he asks you what you did in the great World War II, you WON’T have to cough, shift him to the other knee and say, “Well, your Granddaddy shoveled shit in Louisiana.”

No, Sir, you can look him straight in the eye and say, “Son, your Granddaddy rode with the Great Third Army and a Son-of-a-Goddamned-Bitch named Georgie Patton!”

Dave was in the battle. Are you? Do you understand what’s at stake? Patton did. Dave did. Many of us do.

Dave chose an amazing man to emulate. And through his battle with leukemia, ThirdWaveDave never shirked, he never folded, he always moved forward, never holding ground. In the face of sometimes seemingly insurmountable odds, he persevered without complaint. Dave Logan was and will always be defined by his hero.