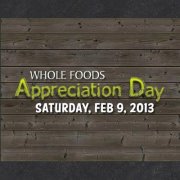 Here is a chance for Conservatives and Tea Party members to join together to support someone who lives by Conservative principles. Just as we supported Chick-fil-A, Pappa Johns, Dominos and Hobby Lobby, Whole Foods deserves all of our support. Join in Whole Foods Appreciation Day on Saturday, February 9th by shopping at your local Whole Foods store.

Here is what Whole Foods Appreciation Day is about:

On January 16, while being interviewed on NPR, Whole Foods CEO John Mackey gave his opinion about the President’s healthcare law, and angered supporters of the law.

Mr. Mackey simply stated that the President’s health care law was more like fascism than socialism (which he had previously stated a couple of years ago), and he explained his reason for saying this:

Supporters of the President’s takeover of our healthcare system will use any means necessary to stifle debate,

bully those that disagree into submission, and punish anyone who dares to stand up to them. The truth is Mr. Mackey is correct. Our government controls almost every aspect of our healthcare. While the government may not own you, or the doctors, hospitals and insurance companies, these entities are now forced to make all decisions in accordance with government mandates and regulations. The law took all of the problems we had in our healthcare system and made them worse.

And now there are people that want to make John Mackey pay for speaking the truth. These intolerant bullies want to punish Mr. Mackey by destroying his business and his career.

We must stand together to make sure these bullies do not succeed.

Also visit their Facebook pages here and here. This is a great company with great products – let’s all show how much we appreciate someone with a spine – CEO John Mackey. A patriot and a man I am very proud of.