By now most folks have heard about the Pope turning in his resignation papers. I was on the phone with my mother wondering what her thoughts were and listened to her account of the time she and my father were at Newark airport, unaware that the president and the Pope were going to have some kind of meeting there at the airport.

“The next thing we knew, everyone was herded off to one side of the airport, nobody was told why; just that we knew something was up. Air Force One had landed and there were police and security everywhere.” We later found out why our flight had been delayed; freeways and everything else near the airport had been shut down until the meeting ended.

My folks had intended to be on a flight to visit my sister, a flight which they eventually made. Listening to my mother as she remembered each little detail was worth the call as it reminded me of the many times as a police officer I was charged with performing security during a presidential visit to Houston during my tenure with the Department.

Sometimes the assignment was to stand under a bridge along the intended route of the motorcade while other times it was keeping watch on a stairwell inside a hotel where a meeting would be held. Once it was on the roof of the Hyatt next to the revolving restaurant to make sure that part of the hotel was secure; didn’t like being so close to the edge and that huge empty space to the ground below.

One year we received notice that President Bush (41) was coming into town and all days off, vacation and overtime leave was cancelled. The timing wasn’t good; I was the Assistant Scout Master and was supposed to accompany our troop on its way to Scout Camp that very afternoon.

I explained this to my immediate supervisor knowing that it would make no difference; but at the same time knowing there were always far more police officers than needed. I asked for consideration to leave if the opportunity presented itself.

“In your dreams”, was the reply along with a slight belly laugh for even asking. 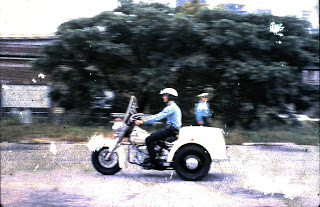 It turned out I was supposed to be on the outer perimeter with my three wheeled motor cycle. The outer perimeter was several blocks away from the Bush residence. Closer in the streets had all been shut down and secret service vehicles parked right down the middle making vehicular traffic impossible; well nearly impossible.

Our Captain wanted to get in for a photo opportunity with the president or some other really important ranking police officer stuff; but his police cruiser didn’t stand a chance of getting down there so he decided he’d use my three wheeled motor cycle. (Did I mention the Captain had never operated one of these monsters?)

When he approached my position I instantly stood down and let him ride off toward the Bush residence while my immediate supervisor stood on the other side of the street. About 10 minutes went by and the Captain came sputtering back with fresh damage to the fiberglass box of the three wheeler, a chunk of fender hanging off just above the pavement.

Without hesitating I reached into my wallet, took out a dollar bill and handed it to my supervisor, “Here you are, Sir. You were right; the Captain wrecked it in less than 15 minutes”.

The blood drained from my supervisors face as his eyes rolled back in their sockets, his wondering what had possessed me to utter such an outrageous statement. He was speechless as I patted him on the shoulder in camaraderie. The Captain mentioned something like, “Don’t worry about the damage…it’s to be listed as ‘old damage’”…with a few words that must have caught in his throat while walking over to where he’d left his cruiser.

As the Captain drove off I mentioned to my supervisor how it would be a good idea to get my busted up three wheeler over to the motor pool for repairs. I then pushed one more button, “Once I get it turned in… would it be okay for me to disappear and join my Scout Troop or would you prefer I check out another three wheeler?”

I must have lived a charmed existence that day, driving off with the Scouts with only a short delay from our original starting time. Upon returning from Scout Camp my three wheeler was repaired and had a fresh coat of paint; just as if it had never happened.

All these memories came roaring back simply because I wanted to know how my mother felt regarding the Pope’s early retirement. The names of the supervisor and Captain?… Consider this just another story in the city and pretend you can hear the opening music for the television series, Dragnet.