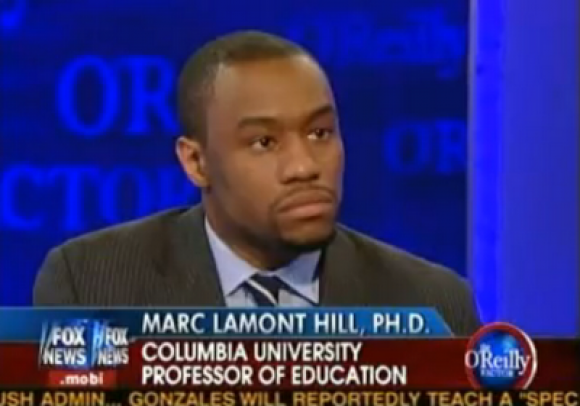 Bill O’Reilly, who made Marc Lamont Hill into a national media star, now acts surprised that Hill had some kind words to say about mass murderer Christopher Dorner’s “exciting” rampage of death and destruction.

The people cheering O’Reilly for “taking it to” Hill and “tearing into” him on his Thursday night show have apparently forgotten that O’Reilly was behind Hill’s rise to media stardom.

In fact, O’Reilly and Hill have been working together for years, feeding off one another, in order to generate ratings.

The question is, why would any media give a platform to such a despicable character as Marc Lamont Hill? O’Reilly has been doing it for over three years. It might be appropriate to cover the remarks if they were a turning point in Hill’s career, and led to his leaving the television commentary business for good. Instead, the controversy only serves to make Hill even more of a “star.”

By the same standard, David Duke, who now calls himself “Dr. David Duke,” would make for a good guest on O’Reilly. The former Klan leader, once as much of a media sensation as Hill, now stands for “human freedom and diversity,” he laughingly claims.

The record shows that Marc Lamont Hill is a notorious apologist for a black racist cop-killer now living under the protection of Castro’s Cuba. He also praised black racist Khallid Muhammad.

O’Reilly knows all of this but he and other media keep putting Hill on the air to spout his venom.

On CNN on Wednesday, February 13, Hill said Dorner, an ex-cop, was “like a real-life superhero to many people,” and that “…this has been an important public conversation that we have had about police brutality, about police corruption, about state violence.”

This is the twisted and sick viewpoint of someone who finds the police guilty of racism for putting black people who commit crimes in jail.

Hill claims he has sympathy for Dorner’s victims and didn’t intend to defend his murders.

Dorner, who was black, was fired from the Los Angeles Police Department (LAPD) for making a false statement during an official investigation. He declared war on the department and promised to murder police officers and their family members. He killed four people before dying in a cabin surrounded by police after a manhunt.

On his February 14 show, in order to hype the controversy and his own ratings, O’Reilly introduced Hill as “Dr. Marc Lamont Hill,” a professor at Columbia University in New York City, and “an ardent liberal guy, and that’s fine.”

This is spin. Hill is not a “liberal.” He’s a Marxist who supports cop-killers and America-haters.

O’Reilly questioned Hill about his comments on Dorner, politely taking issue with some of his remarks. But Hill defended himself, saying he wanted to talk about police brutality.

“I don’t support murder and I empathize with ALL the victims,” he said on his Twitter page. “But that doesn’t mean that we can’t also understand Dorner and his perspective.”

Dorner’s “perspective” was that he hated the police department that fired him.

Originally, as AIM disclosed years ago, Hill’s Twitter page had police mug shot photos of convicted cop-killer Assata Shakur. He took those down when we discovered and publicized them. He also took down tributes from his webpage to Shakur and black racist Khallid Muhammad, known as “America’s Black Hitler,” who gave a 1969 “Kill the White Man” speech to a black audience that included the comments, “…I say, goddamnit, we kill ‘em all! [applause] You say, well why kill ‘em all? Why kill the women? First, why kill the babies? They’re just little innocent blue-eyed babies. Because goddamnit, they’re gonna grow up one day to rule your babies. Kill ‘em now.”

Hill described Muhammad, who died in 2001, as “a mentor, teacher, and revolutionary hero,” and his tribute concluded, “‘I LOVE YOU AND MISS YOU DR. KHALLID.”

Shakur, also known as Joanne Chesimard, fled to Cuba after escaping from prison with the help of the Weather Underground. She killed New Jersey State Trooper Werner Foerster and the FBI is offering $1 million for information leading to her apprehension.

Rather than being a “liberal,” the tribute to Shakur shows that Hill has no real regard for victims and instead sees black crime as a response to white oppression. This is the standard Marxist excuse for black criminality.

An entry on Hill’s curriculum vitae included an appearance at the “Polymathematic University,” also described as the “Political Education Program for the Poor Righteous Communist Party.” It is a Communist group of the Maoist kind.

There is no evidence Hill ever joined this bizarre Marxist group, but perhaps O’Reilly should ask him about it.

For the record, back in September 2009, we identified Hill as a public supporter of convicted cop-killer Assata Shakur and faulted Fox News for hiring him as a paid “analyst” and “contributor.” He had then been appearing regularly on “The O’Reilly Factor.”

Those interested in the facts surrounding O’Reilly’s relationship with Hill should consult the following columns we wrote:

Eventually, News Corp. chairman Rupert Murdoch announced that Hill had been “fired” from the channel as a paid contributor. But that didn’t stop O’Reilly from continuing to feature Hill as a guest commentator.

In short, O’Reilly made Hill into a media sensation.

Mark Lamont Hill is also a host on HuffPost Live, the Internet-based television channel associated with The Huffington Post, which is sponsored by Cadillac.

The Huffington Post has also hired Alyona Minkovski, the Moscow-born Russian-American “journalist” who had been working for the Kremlin propaganda channel Russia Today (RT). She recently hosted a HuffPost Live program on how “the days of McCarthyism are long passed,” wondering whether there was now “a place for communist ideals in contemporary American culture…”

Perhaps Marc Lamont Hill can talk about that, too. He is living proof that Marxism and black racism thrive in the media, including on Fox News.