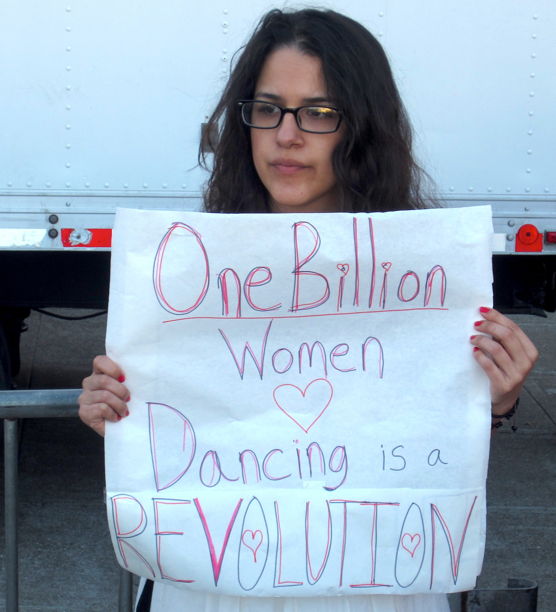 It might be more appropriately called: “How to Hijack a Revolution” or “Leftists Heart the Qu’ran.” Just sayin’. On Valentine’s Day (a day for lovers), Eve Ensler (creator of “The Vagina Monologues”) held her worldwide anti-rape dance/protest known as 1 Billion Rising. And Zombie was there taking pics – a fantastic array of them that are very well done indeed and sprinkled with great commentary where “dancing is a revolution.” At least for Progressive/Marxist Jihadist feminists that is. 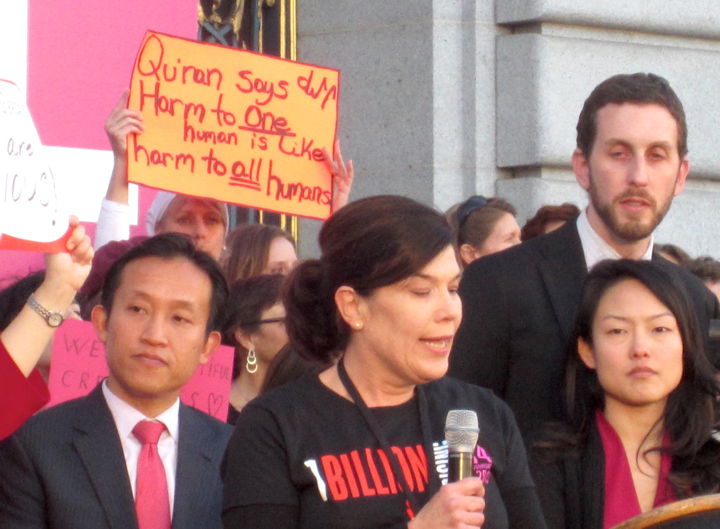 Everyone knows how anti-woman Christians are. Only true caring can be found in the Religion of Peace. So, showcased at the event was a placard with a verse from the Qu’ran. Another Leftist event infiltrated and controlled by Islamists. Who’d a thunk it? Yes, all feminists know that Islam is the truly enlightened path – that is if as a feminist, you enjoy slavery, rape, torture and death as perks. I know that the Jihadist men do.

The event was so enthralled by Islam, that the placard was held by a woman directly behind the speakers at the event. These are people from Occupy San Francisco and community organizers such as head honcho Susan Celia Swan and Supervisors David Chiu, Scott Wiener and Jane Kim. 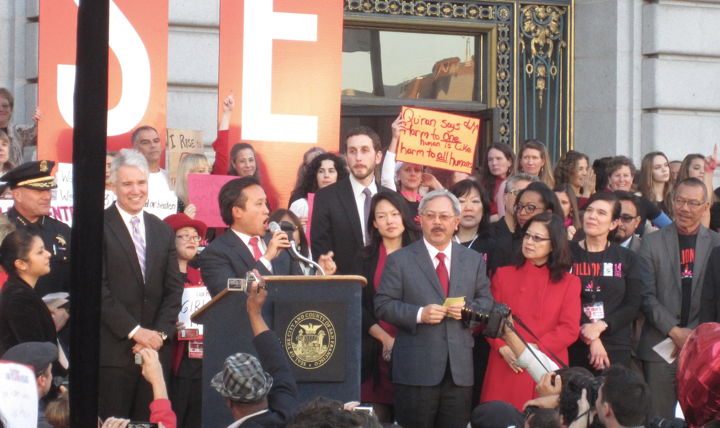 San Francisco Mayor Ed Lee spoke at the event and wholeheartedly threw his support behind it. The government of San Francisco endorsed the Marxist laden event and the Qu’ran placard was strategically held high right behind the City by the Bay’s elite leaders. Don’t cha just love it when Maoist Communism, Progressives and Islamists get together for one giant Marxist lovefest? You can just feel the Leftest love (or is that hate). The entire Board of Supervisors gave speeches at the event.

Amongst the attendees, there were some anti-Agenda 21ers. Good for them! But there were a lot of whackadoos who seemed to think you can ‘love’ violence away. Reality doesn’t work that way folks. Mostly it looks to me as if it was another chance for extroverts to get attention and play out drama. Yawn… I think the attendees are missing the real problem here – it is our culture devolving that propagates violence such as rape. The lack of morality, responsibility and the wholely lacking penalty that should be aggressively enforced against those who commit violent acts. Sort of an eye for eye mentality that should be instituted. I guarantee if it was, crime would go down. And all of it could be done Constitutionally, without vigilantism.

By the way, ‘ignore laws, respect each other,’ doesn’t even make sense. By following the laws, you respect each other. Someone should stay out of the druggie jar a little more and start practicing ‘do unto your neighbor, as you’d have them do unto you.’ Yes, I am talking to the dingbat anarchists out there.

For a relatively small protest of about 2,000, the Leftist media swarmed. Figures. But let a million or so Conservative Tea Partiers show up and crickets ensue. Up is down, down is up and propaganda is everywhere. Have no fear, the actual Communists (the Revolutionary Communist Party, USA) did show up and were welcomed. What did you expect? They got prime interviews with the American Pravda.

And if you wanted Leftist theater, there was always the ‘voguing’ of a transvestite to be enjoyed on a Jumbotron – nothing screams womanhood, like someone who is isn’t one. Did I mention there was a huge contingent of attendees wearing t-shirts that said: “Intifada of Women in the Arab World?” Because we all know that gays, women and the Arab world go together so well. They hang you if you are gay, you know – I guess that is another way to support women, right? Don’t forget those showing up wearing kaffiyehs as well. Gee, it’s almost like Islamists and Communists are infiltrating and subverting events nationwide. Nah! That couldn’t be (sarcasm intended).

Zombie’s pictoral essay is a must read: 1 Billion Rising San Francisco. Take a stroll through the throngs of what ails America and remember that the Constitution and Conservatism is the cure. Smaller government, less taxation and a return to Constitutional principles. Or we can go the way of San Francisco. I’ll take choice number 1 please.

3 thoughts on “Dancing Is A Revolution”