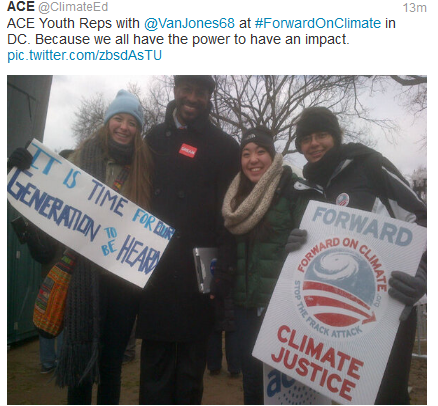 Sen. Whitehouse to Speak at “Forward on Climate” Rally in Washington
Rally on National Mall Begins at Noon
Thursday, February 14, 2013

Washington, DC – This Sunday, climate change activists from around the country – including several busloads from Rhode Island – will converge on the National Mall in Washington, DC for what is being billed as “the largest climate rally in U.S. history.” Today it was announced that U.S. Senator Sheldon Whitehouse (D-RI), one of the leading voices for action on climate change in Congress, will be speaking at the rally.

“I have been fighting hard to break through the barricade of special interest influence preventing action on climate change in Washington,” said Whitehouse. “This rally is an opportunity for people from all across America to tell those special interests to get out of the way. It’s time to take serious action, both in Congress and in the Administration, to address the damage that climate change is already causing to our communities.”

The event, called “Forward on Climate”, is being organized by the Sierra Club, 350.org, Hip Hop Caucus, Environment America, League of Conservation Voters, and a coalition of more than 50 other organizations. It will take place at noon at the northeast corner of the Washington Monument.