I have written before about the enormous amount of ammunition being purchased by the Dept. of Homeland Security and other agencies of the Federal government. Facts show that more than 2 BILLION rounds of ammo have been purchased so far. Compared to the 5.5 MILLION rounds that our military is using per month in the Iraq and Afghanistan war zones, our government is stockpiling enough ammo to last 20 years. If that information isn’t enough to worry about how about this. The government is using a new kind of target for practice shooting – targets they call “No More Hesitation” that include pregnant women and children holding guns. I think the name says it all. Get the agents used to shooting at pregnant women and children on the target range so that they will not hesitate to shoot at them in real life. 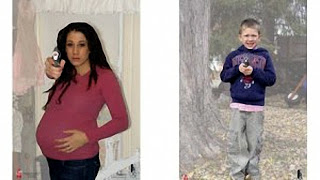 The company making the targets is Law Enforcement Targets, Inc. and they are providing DHS and law enforcement departments all across the U.S. with targets ”designed to give officers the experience of dealing with deadly force shooting scenarios with subjects that are not the norm during training.” This was recently reported on The Allegiant, a web site that describes itself as a Progressive Sociopolitical Network in their story: DHS Using Children and Pregnant Women as Targets. 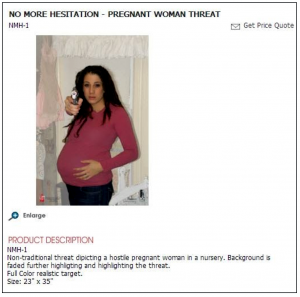 Another story that made the rounds last month was the Urban Warfare exercises conducted in several cities across America. I wrote about the Urban Warfare night training in Miami, Florida, Houston, Texas and several other cities that included Army Blackhawk helicopters flying below rooftop levels firing blank rounds of machine gun fire that scared the crap out of lots of people. While several local television stations reported the local events that included citizen-captured videos, none of the national news media bothered to give it much coverage and no one offered any explanation. But the above mentioned web site, The Allegiant did and they wrote about some very dramatic insight. This is what they said in their report:

I spoke with a high-ranking, military source in DHS. Preferring to remain unnamed for obvious reasons, he told me, “DHS and DOD are conducting desensitizing exercises all across the U.S.,” he paused, then added, “we’re being prepared for mass civil unrest in major U.S. cities. DOD will be expected to help – when we’re requested.”

I asked if there was a timeline for expecting civil unrest in our cities and why should we expect it to begin with. I was told that there were many reasons, but that the continued devaluation of our currency, the predicted history-setting prices for gasoline this summer and the continued gun control debate are forming a perfect storm of civil discontent. When this storm hits, it will most assuredly produce mass casualties. When does DHS expect this to happen? This summer.

Its time we started connecting the dots and put an end to all the doubt. Something very bad is about to happen. The facts are right in front of our eyes like pieces of a puzzle and all we have to do it put them together. There cannot be any more coincidences. Reports came out recently that several high-ranking military officers have been submitting their resignations or suddenly retiring. Then it was suggested they were being asked if they could order their troops to shoot on American civilians – on American soil. Not shoot on terrorists but shoot on ordinary American civilians. Last year it was revealed that FEMA has constructed concentration camps in America that they call Internment Centers. Then the U.S. Army posted job bulletins for Internment Specialists to run the camps. But this doesn’t seem to be enough to grab anyone’s attention in the leftist national news media. Even though the Democrats, at the insistence of Barack Hussein Obama, have passed laws giving the U.S. Army the power to arrest and detain without trial any American citizen. Even though Congress voted for The Patriot Act to suspend key articles of The Bill of Rights. Our Dept. of Homeland Security classifying returning war vets, 2nd Amendment and Pro-Life supporters as potential domestic terrorists, our government, which was once referred to as “of the people, for the people and by the people” now seems to be very close to a totalitarian dictatorship.

Now we switch over to the current budget talks and the subject of Sequestration and what will happen in a few weeks when Barack Hussein Obama fails to reach an accord with the Republicans in the House of Representatives. Drastic layoffs are coming and more than 600,000 civilian employees of the Defense Dept., alone, will be out of work. The Pentagon notified Congress on Wednesday it will be furloughing its civilian workforce of 800,000 employees if sequestration goes into effect March 1. Cutbacks in the size of our military. Overhaul schedules in naval shipyards are being cancelled and reports say that includes weapons system upgrades, as well. The net result will be a drastic reduction in our military strength and capabilities.

Many conservative bloggers, as well as the leadership of the Republican Party, are suggesting that all of these things are the result of a gross failure in leadership on the part of the Democrat administration but I think there is something more to it that that. Suppose for a moment that Barack Hussein Obama has planned this failure all along? Not planned for it but actually planned to make it happen. Suppose he wants the military to be whittled down to a fourth rate power? Suppose he wants the economy in America to collapse? Suppose he wants to create an excuse to cause civil unrest that would warrant a national emergency so great as to suspend civil rights and institute Martial Law? And suppose he has planned for dealing with it by stocking up on 2 billion rounds of hollow-point ammo, the kind of bullets that has been outlawed for use in warfare by the Geneva Convention? Suppose he is getting his wish to create a civilian national security force of DHS and TSA troops conditioned to shoot pregnant women and children in the civil war he has anticipated? Do you recall him saying so on his campaign stop on July 2, 2008? “We cannot continue to rely only on our military in order to achieve the national security objectives that we’ve set. We’ve got to have a civilian national security force that’s just as powerful, just as strong, just as well-funded. [YouTube, 7/2/08]” And suppose their timetable is accurate and it will all begin this summer?

Now suppose, also, that our enemies are fully aware of this? Suppose they are waiting for a moment of opportunity when America becomes gravely weakened by our economic distress and internal conflicts? Think of Civil War and the collapse of the economy with unaffordable gas prices, food shortages and catastrophic unemployment. We are living on a bubble that is ready to pop as soon as a little more pressure builds up or someone sticks a pin in it. And we certainly have enough enemies around the world to worry about. We got a crazy dictator in North Korea testing his ICBMs and his nuclear weapons. We got another crazy dictator in Iran hellbent on building his own atomic bombs. We’ve got communist regimes in Russia, China and Venezuela that would love to see us destroyed. Didn’t the Russian’s have a few bombers carrying atomic weapons fly around Guam last week? Were they testing our defenses? Lets say for the moment that China and Russia, both communist regimes, have different ideas on what to do with a weakened America. Suppose China was concerned over the Russian bombers flying over Guam? Suppose the Chinese decided they need to protect some of their investments in America to secure the TRILLIONS of dollars they loaned us and planned an invasion? What was once the plot of a few Hollywood movies is a lot closer to reality today. Now suppose the background story concerning Barack Hussein Obama was added to the mix? The fact that he was mentored by a known card-carrying member of the Communist Party for 8 years before he even went to college. And while in college Obama had the audacity to admit he joined several radical socialist groups. And after college he launched his political career in the living room of two communists named Bill Ayers and Bernadine Dohrn. And then he joined the socialist New Party in Chicago to help get elected to the Illinois legislature. And after a meteoric rise in the Democratic Socialist Party he gets to run the whole show and surrounds himself with radical Muslims and communists. I believe his whole plan from the very beginning was to weaken America, disarm our citizens and lay the groundwork for our destruction.