Some of you may need a translator for the title, or not. This time of year is rodeo time, at least it is here in Houston, as Mary Bailey of the Cypress Creek Mirror reminds us.

“Friday, Feb. 22, is Go Texan Day, when Houstonians will dress in their cowboy boots and hats in celebratory anticipation of the Houston Livestock Show and Rodeo.”

Many dress for the occasion displaying a mild western style shirt, perhaps sporting a pair of cowboy boots at the office so everyone will see. Myself, I have a pair of cowboy boots that I wear only once a year to our church’s Chili Cook-Off; which just happens to be scheduled for this Saturday evening. I don’t like wearing cowboy boots; they make my feet hurt, just sayin’.

Several years ago I was volunteered to represent the Sunday School auxiliary organization at the Chili Cook-Off. I don’t know the first thing about making chili so it was easier to open several cans of chili and pour them into a huge pot. Now to be fair, that chili had been processed and canned at the church’s canning facility on Hafer Road so, in an abstract sort of way, I did have some hand in making it. 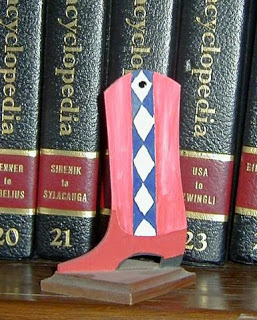 I got distracted while the chili was on the stove and my wife alerted me to the fact that something was burning. It was only the bottom part of the chili the got burned so I mixed it around to even things out; call it natural smoke flavoring, that’s what I called it. Nobody died from eating my gourmet chili; nobody came back for seconds either. Some tender hearted individual might have gotten their feelings hurt; but I did get a trophy, the Boot Award. The judges didn’t come right out and say it; but most likely it was for having the worst entry at the cook-off.

Back when I was a uniformed officer with the Houston Police Department we had to wear, or is that got to wear, a silly looking western style bow tie. I don’t think they do that anymore; Houston is now a truly cosmopolitan city, thinking of a line from the movie Tombstone. In the middle of a shoot out in front of the saloon while Sheriff Behan was singing the praises of how Tombstone would one day rival San Francisco in sophistication and high society.

Doc Holliday sarcastically observed, “Very cosmopolitan…,” you get the idea.

Several years ago my daughter had some fun explaining to a visitor to our fair city about the trail riders moving slowly toward Memorial Park, backing traffic up along major freeway service roads, “Oh, that, it’s just our typical Friday traffic,” as if we had chuck wagons, cowboys and horse manure scattered about all the time. In actuality, most of the manure is found at City Hall; but that’s a whole other story as we say round these parts.

In a warped sort of way I miss being a cop helping bring in the trail riders on Go Texan Day. We’d show up at the city limits and clear a path for these folks along the service road of which ever freeway they were near. It would be a long day as a rule, holding up side road traffic while scores of riders meandered their way into the heart of Houston prior to ending up at the park.

Then on Saturday morning there would be the parade downtown; kids from ‘one to ninety-two’ lining the streets to yell out, “Yee-haw” as the procession opened up one of the biggest rodeos in the nation. Some will argue that it IS the biggest rodeo; but what else would you expect, this is Texas.

So, to all you folks who aren’t lucky enough to live in Texas, I feel sorry for you. I like the bumper sticker often found around here, “I wasn’t born in Texas; but I got here as quick as I could.” A firm handshake is always welcome along with a warm smile and don’t forget to say, “Howdy, Podna.”