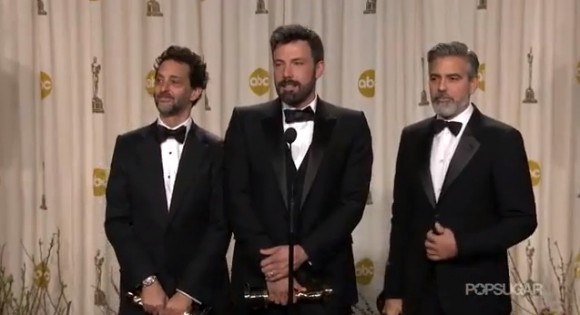 The left and the right agree on one thing. Argo, the film directed by Ben Affleck, greatly distorts the known history of what happened during the Iranian hostage crisis. But that’s where the agreement ends.

When asked in a post-awards ceremony press conference to reflect on making movies about true life events, Affleck said, “I think that it’s tricky, you walk a fine line. You’re doing a historical movie, naturally you have to make some creative choices about how you’re going to condense this into a three-act structure. It’s not an easy thing to do, you try to honor the truth of the essence, the sort of basic truth of the story that you’re telling. I’m really proud of the movie… The story that we’re telling is true…It’s constructed as well as it can possibly be.”

The movie is entertaining, no doubt, but it is one of those efforts in which the creators want it both ways. They want it to be taken seriously as the truth, but if you find inaccuracies, large or small, then it’s only a movie. Don’t nitpick.

Salon.com offers the left-wing critique, by Andrew O’Hehir, including a bizarre claim that Affleck and screenwriter Chris Terrio “are spinning a fanciful tale designed to make us feel better about the decrepit, xenophobic and belligerent Cold War America of 1980 as it toppled toward the abyss of Reaganism,” while claiming “to be innocent of all ideology.”

Calling it “wholesale fictionalization,” O’Hehir says that “‘Argo’ applies a faint left-center gloss to its patriotic fantasy,” so that “its propaganda is largely agreeable to its target audience, and is hence perceived as not propaganda at all.” Who does he think the target audience is? We might agree, however, that it is “a self-smooching gift from the film industry to itself, a likable mainstream hit that possesses what critics sometimes call ‘movie-movie’ qualities. It’s a real movie about a fake movie that makes a few lightweight observations about the similarities between spycraft and moviemaking, the two greatest let’s-pretend businesses of our age.”

I prefer the conservative critique from Investor’s Business Daily (IBD). They call it “historic revisionism masquerading as revelation,” which “conveniently makes the Democrat laughingstock of the crisis, former President Carter, look good.” Having discovered that Carter “quietly collaborated on the film,” they write that “it smells like a bad Hollywood plot to rehab Carter’s legacy as one of the worst presidents in history.”

The editorial argues that “the Canadians were responsible for over 90% of the rescue of those U.S. Embassy workers, from safehousing them at the Canadian ambassador’s home to securing their visas to even securing the Swiss Air flight that spirited them out of Iran.” Carter admitted as much on Piers Morgan Tonight on CNN last Thursday. The editorial also points out that “‘Argo’s’ final heart-thumping scene at the Tehran airport, where the American diplomats’ cover is almost blown as they race to the gate, never happened,” and that “The Carter administration contributed next to nothing to securing their freedom. It played not just a minor role, but an insignificant one.”

IBD concluded that the film “was designed to rehab Carter’s failed presidency, just as ‘Zero Dark Thirty’ was made as a paean to Obama, just as ‘Inside Job’ was a coordinated Democrat attack on Wall Street, just as Michael Moore’s ‘documentaries’ were anti-GOP propaganda.” My only problem with the IBD editorial is that they left out Al Gore’s mockumentary, “An Inconvenient Truth.”