The mess is of considerable proportions, as I see it. Redeemable, yes. With determination, inner confidence, strength and faith. But are we seeing these factors in play sufficiently? A friend told me today that she’s feeling demoralized, and she’s not alone.

I actually had hopes a day ago, that by the time I sat down to write today, late in my day, there would have been an announcement about Bennett having signed on to the coalition. Yesterday Likud was saying that it was coming any minute — maybe last night, maybe during the day today. Now reports have it that it will be in the “next few days.” Obviously, while there has been progress, everything is not going quite as smoothly as certain parties would have us believe. I believe the catch is Livni’s role in the government.

The parameters of the current political situation are beginning to become less clouded. The deal between Bennett and Lapid was, it seems, not that neither would join without the other, but that neither would negotiate terms that were unacceptable to the other. And so, apparently Bennett held out for hardi draft terms that are acceptable to Lapid, and Lapid is making noise about the roles Livni is slated to play, a matter of greater concern to Bennett.

While perhaps we are close to being able to assume that Bennett ultimately will sign on, it is still not clear at all whether Lapid will. The latest news says negotiations with him begin tomorrow, but he’s hedging his bets and also maneuvering himself into position to head the opposition, should he not join the coalition. (Were he to head the opposition, Lapid would work day and night to bring the government down. Surely Netanyahu realizes this.)

If they both do join, with Likud having accomodated their terms, then it will be apparent that Netanyahu’s ploy in bringing on Livni was a huge failure.

But we’re not there yet. Netanyahu is also hedging his bets. Maariv has it that he’s currently courting Shelly Yachimovich of Labor for all he’s worth — allegedly promising Labor both the Finance Ministry and the Industry, Trade, and Labor Ministry, the two top economic portfolios; with an additional promise to back MK Binyamin Ben Eliezer to succeed Shimon Peres as president.

If he brought in Yachimovich he’d attempt to wash his hands of both Bennett and Lapid, and would take in the hareidi parties, Shas and UTJ, along with Livni and Mofaz.

This, my friends, makes my hair stand on end, which is quite a trick since I have curly hair. It would represent an absolute betrayal of those who voted for Likud and of the members of the Likud faction itself, many of whom are right wing.

Perhaps Yachimovich is too smart to allow herself to be used by Netanyahu, and perhaps both Bennett and Lapid ultimately will be on board. But I think it’s time the prime minister heard from us.

This is a communication that is particularly important for Israelis to send.

Let him know that you are a voting Israeli and consider his moving left a betrayal of those who elected him and of the faction he is supposed to represent. Tell him that he’s being watched, and that how he behaves now will directly affect his political future. If you’ve voted Likud in the past and do not think you will next time around — tell him!!

If you are Israeli, please share with others. If you are not an Israeli, but have relatives or friends who are, send this to them.

Now we come to the issue of Iran, an ugly situation that is rapidly deteriorating into one more ugly still. It is because of this situation, beyond all others, that Netanyahu’s political games are so incomprehensible and so deplorable.

He tells the world how important facing down Iran is, and I have praised him mightily for doing so. But he’s not putting Israel in the proper place for facing down the threat — this requires a strong, cohesive, right wing government.

The Telegraph (UK) has published pictures, taken recently, of a heavy water production plant, in Arak, Iran, 150 miles southwest of Teheran. Heavy water is used in operating a reactor that produces plutonium, which can be used to produce an atomic bomb. The pictures show activity, including a cloud of steam, that indicates heavy water production.

What is more, pictures show anti-aircraft missile and artillery sites protect the plant. IAEA inspectors have been denied access to the plant since 2011. And Iran is stonewalling on providing any information about what’s going on there.

This is being referred to as Iran’s plan B for securing a nuclear weapon. But Iran’s plan A is still in operation, and being accelerated!

And so I must ask, how stupid are the world’s leaders? Do they not understand what they’re going to be facing down the road? Or do they understand and — for totally incomprehensible reasons — just not care? Perhaps they delude themselves that it won’t be so bad, and that containment will work. Perhaps they are simply cowards.

Today, the second round of negotiations between P5 + 1 nations and Iran, at Almaty, Kazakhstan, ended. Nothing was achieved, but Reuters reports that the Iranians were “upbeat,” seeing the talks as a “positive step” in which the six powers tried to “get closer to our viewpoint.”

The only thing that was decided was that experts would meet in Istanbul in March, and that political discussions would resume in Almaty on April 5.

“I hope the Iranian side is looking positively on the proposal we put forward,” said EU foreign policy chief Catherine Ashton.

The attitude expressed by her exemplifies precisely what’s wrong with these negotiations. I have noted this on previous occasions. They are being conducted as if between two equal parties: You give this, I’ll give that. I make an offer and see if it pleases you. Instead of a clear message (however it is couched diplomatically): We don’t like what you’re doing. Continue as you have been and we’ll ensure that you are stopped. If we have to, we’ll blow you to kingdom-come. Now would you like to discuss how to dismantle your program?

A spokesman for Ashton said, “We are looking for flexibility from the Iranians.” A splendid example of “head in the clouds” thinking.

Israeli officials seem the only ones who are seeing matters straight, with regard to these meetings. Said one official:

“The Iranian strategy is clear: to draw out diplomacy and continue to engage, but in parallel to continue enriching uranium. They are engaged in a consistent strategy to draw out the talks. Their ultimate goal is to keep taking, and one day surprise the world with nuclear tests.”

While the negotiating parties are talking about making an offer to Iran regarding cutting back sanctions in return for certain actions, the Israeli officials are speaking about “dramatically upgrading” the sanctions, which must be backed by a credible and convincing military option.

An official in Jerusalem clarified, saying that the international community must clearly state what the “or else” part of the “stop the bomb or else” equation is.

This is what they’re afraid to do.

In addition to “unnamed Israeli officials,” the prime minister himself made a statement today about the need for “military sanctions”:

Israel’s Channel 10, cited by Times of Israel, on Monday reported that:

“US President Barack Obama will tell Prime Minister Benjamin Netanyahu that a ‘window of opportunity’ for a military strike on Iran will open in June:

“Obama will come bearing the message that if diplomatic efforts and sanctions don’t bear fruit, Israel should ‘sit tight’ and let Washington take the stage, even if that means remaining on the sidelines during a US military operation…Netanyahu will be asked to refrain from any military action and keep a low profile, avoiding even the mention of a strike.” The report cited unnamed officials.

Well, in the context of the above discussion, I felt it responsible to report this, while indicating that I find it very hard to believe. Especially is this so with Hagel now to be secretary of defense.

What is most credible about this is the fact that Obama indicates he would not want Israel involved, clearly so that it would not appear to the Arab world that the US was allied with Israel or acting on Israel’s behalf. President Bush senior pulled something similar when he went after Saddam Hussein.

Plus, there is the remote possibility that the exposure of Iran’s plan B, which is now starting to be operational, might be stiffening Obama’s back and forcing him to face realities.

But, as I’ve discussed before, it’s a tough sell, getting Israel to sit back and trust Obama on this. Nor is it prudent Israeli policy to put Israel’s security in the hands of another nation.

I ponder what is expected to happen in June that would allegedly open the “window of opportunity” that is referred to. And whether this would bring us past our own “window of opportunity” for striking. That is, if we waited, and the US failed to strike, if we would find we no longer could because we lack the equipment to hit those reinforced bunkers.

That Iran is a menace to Israel is evident even beyond the issue of its nuclear arms development. In recent days, terrorist plots against Jews and Israelis have been exposed in Nigeria and Cyprus.

Mick Jagger and the Rolling Stones are coming to perform here in Israel on Monday, April 15, to help celebrate our 65th Independence Day. This is in spite of pressure brought to bear by British, European and US Boycott, Divestment and Sanctions (BDS) groups.

“We’ve been slammed and smacked and twittered a lot by the anti-Israeli side,” said Mick Jagger, the band’s leader… “All I can say is: anything worth doing is worth overdoing. So we decided to add a concert on Tuesday.’

“This is a huge mistake for the Stones,” declared BDS proponent Rabbi Lynn Gottlieb. “They stand to lose a lot of money as a result of showing solidarity with Zionism, because their most devoted fans also support boycotting Israel.”

“I don’t really count myself as a very sophisticated businessperson,” Jagger responded…”I’m a creative artist.” 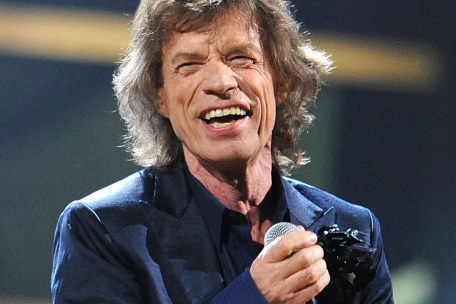 Well bravo! So heartening to know we have friends of courage.

And Gottlieb? She should hang her head in shame for her statement. Her head should hang so low that she can never lift it up again. Opposed to someone who shows “solidarity with Zionism,” and calls herself a “rabbi.”

How bitterly ironic is this situation.

You can see further information on Israel Matzav:

I whole-heartedly endorse the suggestion — made by the person who sent me this information — that everyone go out and buy some of Jagger’s music so that he comes out ahead on this. (Thanks Paul R.)