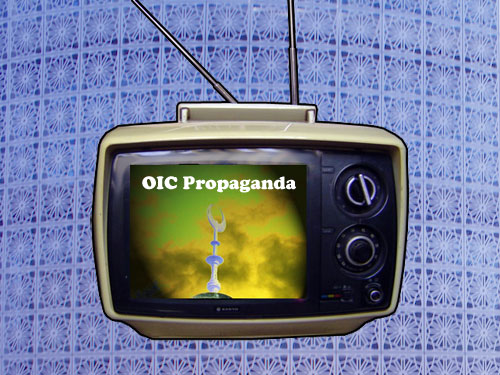 The Organisation of Islamic Cooperation (OIC) has recently started thinking about a new TV project. According to Arab News the new OIC TV channel will be launched in 2014 (1) The Arab News article reports that one of the possible locations of the headquarters for the new channel will be Cairo. Of course such a venue would put it safely in a country controlled by the Muslim Brotherhood, though Western leaders already seem to have depicted the Egyptian Muslim Brotherhood as the happy smiling face of Islamic fundamentalism and therefore good partners in world affairs. The whole world may therefore be able to look forwarded to lectures on human rights from the successors of Hassan al-Banna who founded the Islamist Muslim Brotherhood.

According to the International Islamic News Agency (IINA):

“The channel would focus on commercial, economic and financial issues concerning the 57 member states. Its aim is to consolidate cooperation among member states and peoples to facilitate information and knowledge exchange.” (2)

However, given the OIC’s past behaviour the broadcasts will be replete with accusations of ‘islamophobia’ and claims of victimhood even as non-Muslims in Islamic societies continue to suffer persecution. Indeed the headline of an article TRT-world.com (3) suggests that combating ‘islamophobia’ will be one of its roles.

Perhaps a suitable name for the channel would be Witch Hunters Without Borders based on what appears to be the OIC’s primary role. There will undoubtedly be demands for curbs on freedom of speech in the West and the imposition of Islamic blasphemy laws. Human rights abuses against non-Muslims that take place every day within OIC member states will have no place on the channel. If covered at all such reports will probably be dismissed as Zionist or Western right wing propaganda.

It is likely that human rights activists who oppose sharia on humanitarian grounds will be exposed to the usual demonization. Such people undoubtedly will be labelled ‘islamophobes’ and cast into the outer darkness. Governments in the West will be warmly encouraged to persecute such heretics. The causes of hurt feelings will be equated with crimes against humanity, while real crimes against humanity that take place every day in OIC countries will be ignored. Those who expose such crimes will be called ‘hatemongers’.

(3) OIC to launch satellite TV channel to counter Islamophobia: The Organization of Islamic Cooperation has set about launching a television channel to broadcast via satellite to the whole world (trt-world.com)