Nothing concrete to report yet on the coalition, as, again, there are mostly rumors. Based on what I’m reading, however, I confess to a great unease that Lapid sees himself as a reformer upon whom formation of the coalition depends — and who thus can, with his demands for entry into that coalition, instantaneously restructure much of Israeli society. Whether he’s right or wrong on specific issues, I fear a heavy-handed audacity that is only going to tear the society apart.

Not that the haredi parties are behaving in a manner that is going to bring our society cohesiveness, either.

Reports have it that the formation of the coalition is being held up because Lapid demands the foreign ministry and Netanyahu is saying he promised it to Avigdor Lieberman and intends to keep that promise.

I hope they were listening:

General James Mattis, head of US Central Command and the top US commander in the Middle East, in a briefing before the Senate Armed Services Committee, said that the current regime of sanctions and diplomatic relations is not working to stop Iran, which is enriching uranium beyond any plausible peaceful purpose.

“I think we have to continue sanctions, but have other options ready,” he explained, saying that these other options don’t necessarily entail open conflict, but a military operation is “one of the options that I have to have prepared for the president.”

That’s all well and good, except for the fact that the new US secretary of state has just undercut the option of a military operation with his recent remarks. At an ABC News interview in Doha, Qatar, John Kerry said:

“I’m not going to get into red lines and timing publicly except to reiterate what the president has said again and again, which is he prefers to have a diplomatic solution.

“He would like to see the P5+1 process, the negotiation process, be able to work, and avoid any consideration of any military action.”

Excuse me, but the head of the US Central Command said this wasn’t working and yet Obama would prefer to continue with the “P5+1 process”?

If you were running Iran, would you be afraid that Obama might order a military hit?

But the fact that Iran’s leaders are not afraid of this severely weakens the potential impact of the sanctions and diplomacy. It’s not — agree or else. It’s more like — golly gee, I really want this to work.

Kerry’s refusal “to get into red lines and timing publicly” is quite deliberate. But the whole point, which he chooses to evade, is for the Iranians to be informed quite openly that there’s a line beyond which their behavior will not be tolerated.

I feel positively schizoid as I write this, for Netanyahu’s internal political conduct has been making me crazy, and yet I must continue to recognize him as the most forthright of all national leaders on the issue of Iran. Forthright in words, at any rate — in how he paints the situation; how he will act, remains to be seen.

Netanyahu was supposed to attend the recent AIPAC Conference in Washington, but could not because the coalition is not yet formed. And so, two days ago, he addressed the Conference by audiovisual hook-up. With regard to Iran’s pursuit of nuclear weapons — which he maintains will be the first topic of his conversation with President Obama — he said this (emphasis added):

“…Iran has made it clear that it will continue to defy the will of the international community. Time after time, the world powers have tabled diplomatic proposals to resolve the Iranian nuclear issue peacefully. But diplomacy has not worked. Iran ignores these offers. It is running out the clock. It has used negotiations to buy time to press ahead with its nuclear program.

“…The sanctions have hit the Iranian economy hard. But Iran’s leaders grit their teeth and move forward. Iran enriches more and more uranium. It installs faster and faster centrifuges Iran has still not crossed the red line I drew at the United Nations last September. But they are getting closer and closer to that line.

“And they are putting themselves in a position to cross that line very quickly once they decide to do so.

“Ladies and Gentlemen, to prevent Iran from developing nuclear weapons, we cannot allow Iran to cross that line. We must stop its nuclear enrichment program before it will be too late. Words alone will not stop Iran. Sanctions alone will not stop Iran. Sanctions must be coupled with a clear and credible military threat if diplomacy and sanctions fail. I deeply appreciate something that President Obama has said repeatedly. And you’ve just heard Vice President Biden say it again. Israel must always be able to defend itself by itself against any threat to its existence. The Jewish people know the cost of being defenseless against those who would exterminate us. We will never let that happen again… We have our place under the sun. And ladies and gentlemen, we shall defend it.”

An AIPAC panel discussion on the Iranian issue highlighted the serious divisions between Israel and the US on the matter of stopping Iran, divisions often masked by feel-good rhetoric about how both countries want the same thing.

“We all share the same data, the same intelligence. We are also on the same page on the strategic goal to prevent Iran from being nuclear. But between the floor and the ceiling of the problem, there are doors and windows where we’re not in the same place. We should be much closer on how to prevent Iran to go nuclear.

“The time is running out in 2013. The difference between the United States and Israel on the question could be summed up by ‘three ‘T’s’: a different trauma, a different trigger (this would be the red line), and maybe not enough trust.

“We, the Israelis, come [to the issue] with the Holocaust. We are six million Israeli Jews listening to Ahmadinejad calling for Israel’s destruction. You come with a different trauma, Iraq. You don’t want another war, understandably.

“But this is not a war, this is a one-night operation, and we should speak about it.”

One last, important, word on AIPAC. Please read what Daniel Pipes has to say in “When AIPAC went AWOL”:

Yuck! Locusts, some millions that constitute part of the huge swarm that first hit Egypt, have arrived in the Negev. This is the worst infestation in Israel in perhaps 50 years. 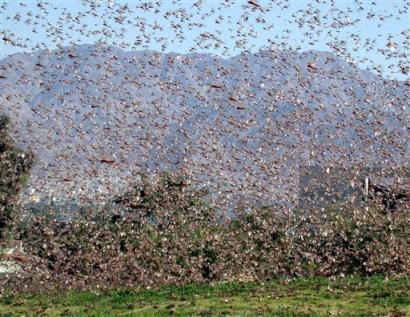 The Ministry of Agriculture made preparations for their arrival, with aerial and land spraying done to minimize the damage to crops.

To demonstrate that not everything is worrisome, I’d like to backtrack just a bit and end with something good that happened last Friday: The International Jerusalem Marathon. 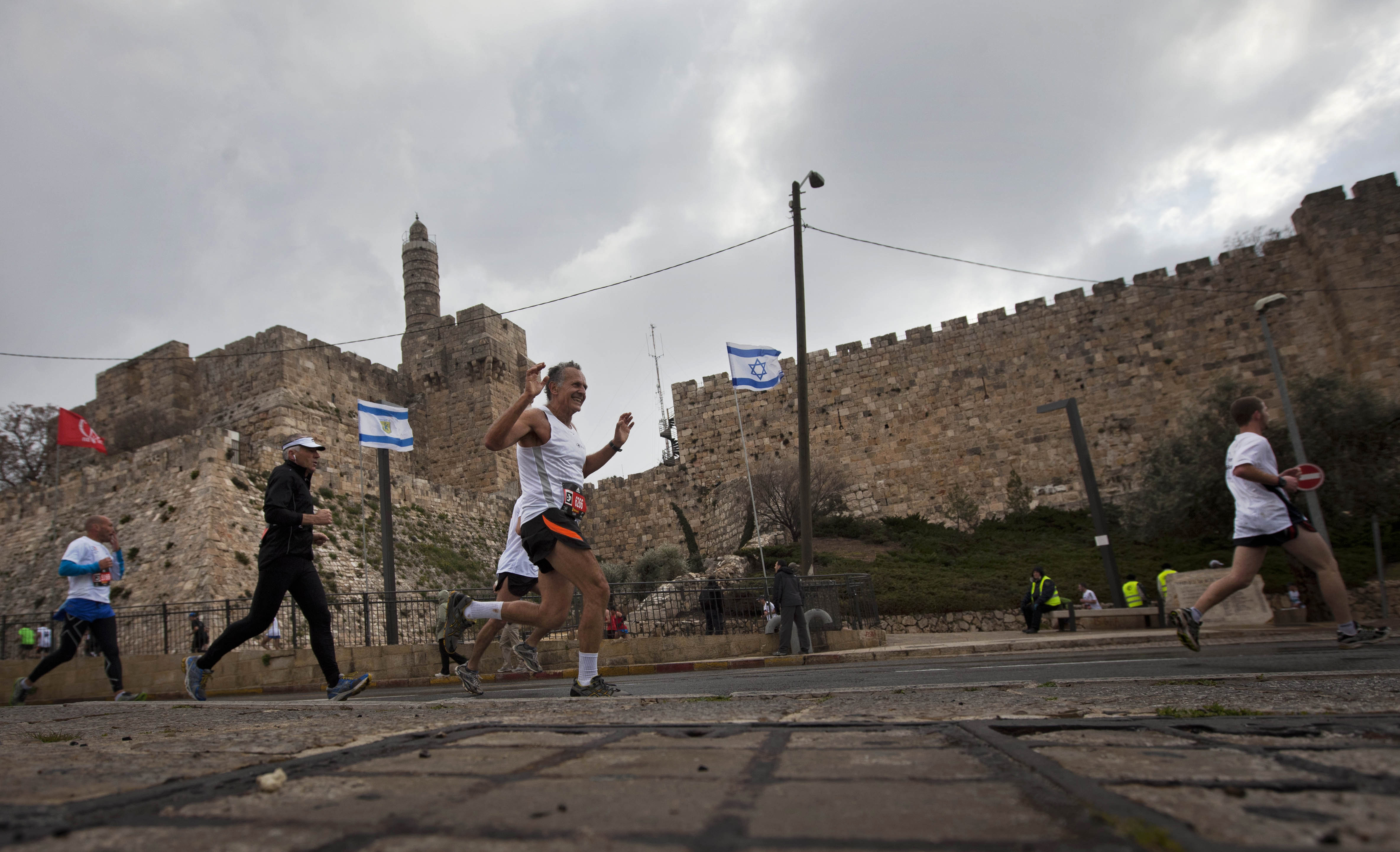 The city was shut down, with roads closed to traffic, but the event was one that garnered good will for the city and excellent PR. There were multiple running courses of different lengths — from professional to amateur — that were designed to take participants through various historical layers of the city.

Some 20,000 participants joined the run, including people from 52 different countries. The race was won by won by Abraham Kabeto Ketla of Ethiopia, who set a new time. 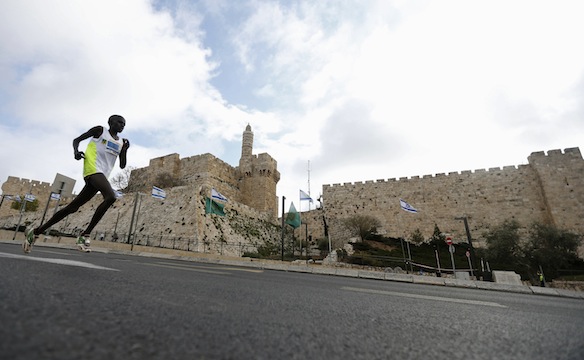 In the women’s division, the winner was Mihiret Anamo Anotonios, also of Ethiopia.

Of course, an international event that tracked Jerusalem’s Jewish history, and brought considerable good will for the united city’s Jewish administration, did not sit well with the PA. The Arabs attempted — with precious little success — to get people to withdraw from the marathon and — with absolutely no success –warned the municipality not to allow participants to run in eastern “occupied” Jerusalem, and definitely not near the Temple Mount, which, they said, belongs only to them.