In the last decade, the Missouri/Kansas District of the Communist Party USA has made a concerted effort to infiltrate the Missouri Democratic Party and in particular, the Missouri state legislature. Many of Missouri’s pro-communist legislators were recruited through the communist controlled Coalition of Black Trade Unionists. This group was headed for many years by Lew Moye, a Democrat, with a long history with the Communist Party. Moye is also a former adviser to Missouri Congressman William “Lacy” Clay.

The communists have even campaigned vigorously for Missouri’s US Senator Claire McCaskill.

One of the earliest communist successes was the election of John L. Bowman to the Missouri legislature in the early 2000s.

Bowman’s career ended in 2010, with a conviction for credit card fraud, but he is still working with the communists to influence state politics.

Other notable Communist Party affiliates in Missouri State politics include:

The current Communist Party affiliates in the Missouri House include Reps. Clem Smith and Karla May.

Key Missouri communists behind this infiltration include Tony Pecinovsky and campaign strategist Glenn Burleigh, a former ACORN activist who has campaigned for Claire McCaskill and personally managed the successful 2008 campaign for Robin Wright-Jones, and for State Rep. Michael Butler in 2012. KeyWiki tracks the incestuous networks of the left, so you know who your real enemies are.

Help us raise our targeted $250,000 this year, so we can employ researchers and editors to increase and improve KeyWiki content in time for 2014 and 2016. 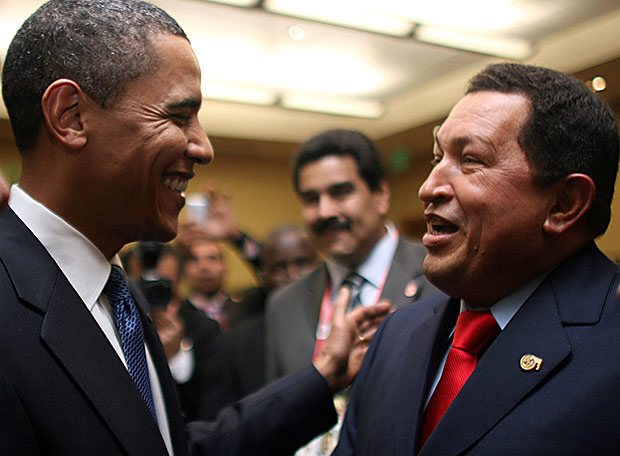 Ding dong… The Venezuelan dictator is dead at the age of 58 from pelvic cancer. He literally rotted from within, just as his soul did. Good riddance, to Marxist rubbish.

But Hugo Chavez’s comrades in the US and across the planet mourn his passing. Grief stricken Leftists such as Sean Penn, the Reverend Jesse Jackson, Danny Glover, Michael Moore, Jimmy Carter, Oliver Stone, Naomi Campbell, Kevin Spacey, Courtney Love, Barack Obama, SEIU (who held a memorial) and a cadre of Hollywood reds are devastated by the loss of their Marxist brethren, who in the end, begged that his subjects not let him die. Iran, Bolivia, China and El Salvador all held tributes to their evil compadre. George Galloway of Britain called him a ‘Spartacus.’ You are who you associate with and mourn for. A fitting end to a crushing, cowardly rule. I don’t hold much hope that his death will free Venezuela though. His second in command will probably succeed him and he is just as insane and just as ruthless as his mentor. May G-d have mercy on Venezuela.

All throughout the media I hear how Chavez was a champion of the underdog, the poor of Venezuela. Really? The only one Chavez championed was himself. He was rumored to be worth approximately 2 billion when he died. People are starving and dying in the streets of Venezuela, while this evil loon ransacked every dime he could from their coffers. Oil kept Chavez fat and sassy until death came knocking.

In fact, Venezuela sounds eerily like America these days. We are following in her Marxist footsteps in so many ways. Our unemployment rate (according to the sycophant Obama media) fell to 7.7% today. What an incredible manipulation (which will be revised in days no doubt) — a record 89,304,000 Americans are now not in the labor force, having given up during Obama’s Keynesian reign of terror — 296,000 fewer are employed since January. The real unemployment rate is closer to 25%, but the elite in power will never tell the truth. They’ll just keep spewing propaganda figuring we’ll believe anything they say. Just like the Venezuelans.

For instance… Before Chavez left this planet for a warmer climate, on paper, it showed that incomes were increasing in Venezuela. In reality, inflation decreased household income by 8.8%. But goods rose by 27% in costs. Gee, sounds a lot like what America is experiencing doesn’t it? Brought to you by American Marxists. Their currency has been downgraded several times as well – 5 times in fact. The last time devaluing it by a whopping 32%. He tripled their national deficit and their debt increased by 90% in his previous term. They are on the verge of bankruptcy and we are right behind them. He certainly enacted his redistributionist, welfare state-expanding, centrally planned economic agenda well, didn’t he?

Some facts on Chavez:

Chavez had swollen the ranks of Venezuela’s public employees to 2.5 million in a country where the 15-64 population numbered only 18 million. With 1 public employee to every 7 working adults, the entire mess was subsidized by oil exports and debt. When the price of oil fell, only debt was left.

Those public employees became Chavez’s campaign staff with no choice but to vote for him or see their positions wiped out to keep the economy from crashing. And they won him one last election.

It seems to me that Obama has indeed turned America into Venezuela. But, it would seem, that Chavez was not Leftist enough for many of those supporting Obama in the US. Which portends very bad things that Obama and his foot soldiers have in store for the American people, as if we didn’t already know that.

And if that is not sobering enough, let’s move on to the ghoulish. I tweeted on this yesterday when I heard that Chavez’s body would be put on permanent display — just like Joseph Stalin. So, the people of Venezuela will be subjected to this ghastly reminder of repression forever. Sickening. The Castro-loving Commie just won’t stay dead. The only thing Chavez succeeded at was bringing the equality of crushing poverty to his people and yet he will lie in state for people to view — or else. Evil despots don’t die, they morph into martyrs and political tools for oppression.

People seem to have forgotten, that this so-called ‘peaceful Marxist’ came to power after two violent military coups. Over 300 people died so he could seize control. Bumps in the road, I’m sure. He then changed the constitution, eliminating the senate and extending his term. A revolt ensued. He then fired 18,000 workers and gave complete control to the unions which he himself controlled. Wait a minute… Deja vu – the feeling that you have been screwed by this Marxist before — only his name is Obama.

So, while a Venezuelan despot has gone to his richly deserved spot in Hades, our American Marxist government and elites mourn him. They have certainly emulated him and will keep doing so as they bring the lid down on America and attempt to finish her destruction. Can you smell a revolt brewing?

If you’ve been keeping up with the U.N. science reports on man made global warming, then it’s a foregone conclusion that we’re all going to drown as ocean levels rise from melting glaciers.

‘“We believe that the mass loss is irreversible in the foreseeable future” assuming continued climate change, the scientists, based in the Netherlands and the United States, wrote in the journal Geophysical Research Letters.’

Never mind wondering if the government is going to go after your 401K retirement plan; the oceans are rising at alarming rates and we’re all gonna’ drown!

Chicken Little scare mongers are inseparably tied to their agenda of turning the clock back a few centuries, back to before mankind destroyed any hope of Earth’s survival.

Had our ancestors never invented fire, glaciers would still be intact. If Thomas Edison hadn’t invented the incandescent light bulb, we’d be living in caves, asleep when the sun went down and Henry Ford will rot in utter darkness for making it possible for the average ‘Joe’ to obtain a motorcar. None of this global warming would have occurred had it not been for men tinkering where they shouldn’t have.

When men wearing blue U.N. uniforms with machine guns come by, if you’ll turn loose of your hard earned money, hand it over to a world governing body made up of third world tyrants and dictators who have nothing more than your well being at the top of their list, then perhaps we can put that money to use and save this wretched planet from capitalists who’ve industrialized the Garden of Eden. Then the earth can return to a time when mankind hadn’t destroyed his children’s future, condemning them to a watery grave as the surf covers tenement buildings in the Bronx.

I’ve a pretty good idea how these ‘scientists’ arrive at their doomsday theories. All they do is enter figures into a computer, doesn’t matter how or where those figures were obtained, the important part is the computer determines the outcome. That way when they publish their findings, “Our computer generated models predict…,” sounds scientific to uninformed morons like me and my next door neighbors.

I was involved in a real scientific study years ago when we took our car to the beach. We parked it on the flat sands well away from the dangerous oncoming tide, a safe forty yards from the breakers. When we first arrived it was early in the morning; we had the beach pretty much to ourselves and the air was pleasantly cool.

As morning progressed the beach became cluttered with vehicles; families out taking advantage of the ocean and adding to the global warming effect. As more people arrived, the temperature rose considerably; clearly the result of extra vehicles pouring CO2 into the atmosphere.

It should be noted the resulting temperatures likely caused glaciers far to the north to melt, adding to the rise in the adjoining waters; the distance from the breakers to where I’d parked our vehicle was measurably closer, enough to wonder if we might be overtaken by the encroaching surf.

The temperatures continued to rise near mid-day and we decided to have cold cut sandwiches rather than roast hot dogs for fear the additional heat would further damage the eco-systems. It was already too late; the rising waters had been set in motion.

Four hours had gone by and the waves rolling in were now causing us to be concerned for our safety. I calculated, on my laptop computer, the rate at which the ocean’s edge was gaining on our position, gathered our belongings and tossed them in the car. We decided the safest place to be, based solely on computer generated figures, was a move to Kansas to avoid certain death as we pictured in our minds the last icebergs evaporating off the coast of Greenland; vanished forever.

Had we only known the damage we’d been doing to Mother Earth, millions of cows expelling methane so we could have chocolate milk with our cookies; forgive us in our gluttony. When they tell us to give more, we promise we’ll send the U.N. more than enough money to save the planet.

We’ve looked over the sustainable planning guide for apartment living and with a little more sacrifice, perhaps we will figure out a way to enjoy our 600 square foot apartment. The idea of sharing the showers and toilet facilities with ten other families will be something to get used to; but in the name of saving the planet we all have to do our share.

It won’t be long, we’re promised, computer generated maps provided by the United Nations Intergovernmental Panel on Climate Change (IPCC) bear out the indisputable facts; mankind has destroyed everything.

On the bright side; after we’re gone there won’t be any man made global warming. This old earth will be restored to its primeval grandeur, nothing but plants and four legged animals wandering around; yes my friends, we’re all gonna’ drown!