(CBS) — It was stunning for those who watched Thursday night as federal agents investigated a possible nuclear threat at Chicago’s Ogilvie Transportation Center.

CBS 2′s photojournalist Lana Hinshaw-Klann happened to be at the scene and used a cell-phone camera to record agents in action. Reporter Dave Savini looks into what agents were looking for and what they found.

Sources say the agents were members of the elite TSA VIPR team on the 5:04pm Union Pacific West line. They were carrying hand-held nuclear-detection devices that picked up a reading.

Turns out someone took a nuclear stress test — whatever the hell that is.

We have a government. I felt reasonably confident this would be the case by now — as the deadline for Netanyahu has run out and Obama is coming this week. But it’s been an insufferably long and complex road getting to that coalition.

I had actually begun a posting last Thursday, when a coalition seemed to be in place. And then I stopped, because yet another roadblock had appeared.

Now, I am less inclined to cover all the ground I would have covered two days ago. Let me simply make some more general observations.

No matter how you view this just-completed process of coalition formation, Netanyahu is the loser. He has made a series of regrettable errors, beginning perhaps with the inclusion of Tzipi Livni — if not before, with his attacks on Habayit Hayehudi. His image as a savvy individual who can turn internal political situations to his liking has been badly tarnished.

Last week, what he did was to demonstrate — hardly for the first time — that he caves.

This was with regard to Lapid’s demands that Rabbi Shai Piron be Education Minister in place of Gideon Sa’ar. He was publicly adamant: “No no and no! Take it or leave it.” Had he said, “Well, I’m not in favor, but I have to consider all ramifications and then we’ll see,” it would have felt different.

Yes, there was a deal that was offered, to make it more palatable for him to back down (and more on this below). I understand, for example, that Bennett and Lapid agreed to withdraw a demand that Livni’s role be reduced. But the overall appearance of backing down was unfortunate.

What we were reminded of, in the course of this dispute, is that if he says, “No, I will not remove Jewish residents of Judea and Samaria from their homes,” it is not necessarily something we can count on. And Obama is due in days.

Then what happened is that Netanyahu had agreed that both Bennett and Lapid would have the (honorary) title of Deputy Prime Minister. But when the papers were offered for signing, it was discovered that this had been excised.
“How can I trust you?” Bennett asked, with very good reason, as he declined to sign.

This was, quite simply inexcusable. With only two days to go, it was a pathetic stunt. Perhaps vindictive, because he had been pushed into caving on something he wanted. Perhaps — as well placed sources in Likud are rumored to have said — he did this at his wife’s bidding. It doesn’t matter. The decision was his.

The coalition was finally able to come together because Bennett and Lapid agreed to relinquish their titles. And so, just under the line, Netanyahu was able to report to President Peres that he has a coalition. This happened about an hour ago, as I am now writing. If he looks happy in the picture below, it’s simply because he’s got himself a government. Pheww! Not that he has the government of his choice. 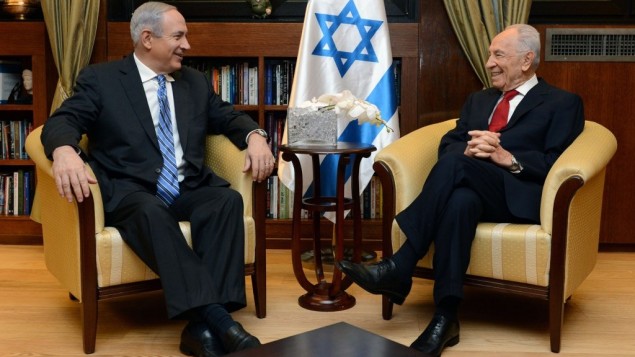 If Netanyahu has been a political loser during this process, it is quite obvious that Bennett and Lapid have been the winners. These are two men whose political stars are definitely rising — which is discomfiting Netanyahu more than just a bit. That fourth term as prime minister, to which he aspires, is looking less and less likely.

Bennett has been hailed as a peace maker — for it was he, doing shuttle diplomacy, who managed to arrange the deal on the education minister.

What is most remarkable here is that the bond between Bennett and Lapid has not been broken in the course of everything that has gone on — and in spite of the fact that politically they do not always agree. This is said to be a personal bond formed out of mutual respect and jointly agreed determination to act on principle.

It should only be! And only time will tell. A political alliance built on principle and mutual respect? This would signal an incredible new day in politics, and great things for the nation. But I’m not ready to celebrate yet.

I’ve already written about, and continue to feel, an unease about Lapid because he is too sure of himself for a political novice, and exhibits more than a bit of arrogance. But quite frankly, in the face of how Netanyahu has behaved of late, the fact that there are new faces, new people with declared principles, seems to me very definitely a positive for our future.

There are serious questions being asked about how long this coalition, with its built in tensions, can last.

The 33rd government will consist of four factions totaling 68 mandates — Mofaz, with his Kadima party, was not included.

There are certain agreements that have been reached. The size of the government has been downscaled — something that was necessary: A technique for handling political assignments for all coalition factions without pain has been to increase the number of ministries. Now there will be roughly 21 ministers plus some deputy ministers. Some responsibilities that would have been assigned ministry positions are being categorized otherwise. There is an agreement that next time there will be only 18 ministers.

A bill will be introduced requiring the electoral threshold to be five mandates.

I will table for now what is being proposed regarding army and national service for haredi yeshiva students — as this highly contentious issue requires a closer look.

According to the Jerusalem Post, there is still some disagreement about party assignments, even though the coalition agreements have been signed. We may not have final assignments in all instances until the swearing-in on Monday.

The new government is certainly not bad in all respects and actually has some quite promising things going for it:

Bennett will be part of the Security Cabinet, which is good, and both Bennett and Lapid will serve in the special committee overseeing the “peace process,” along with Netanyahu, Ya’alon (Defense Minister) and Livni, as negotiator.

How Lapid will stand on negotiation-related issues remains to be seen, and is a matter of no small importance. He is, as far as I can determine, somewhere between Livni and Bennett in his position. Livni has already attacked Habayit Hayehudi, which she sees as an obstacle to her desire to achieve an “agreement.” She says that she hopes Lapid doesn’t move over to where Bennett is.

Bennett will head an expanded Religious Affairs portfolio. Some very positive changes may come from this. It is my understanding that his deputy, Rabbi Eli Ben Dahan, will be given free reign in most matters.

Extremely welcome news is the fact that Uri Ariel (Habayit Hayehudi) will be Housing Minister.

It is also welcome news that Moshe Ya’alon (Likud) will be Defense Minister — especially as rumors had Mofaz in this position. Ya’alon is a solidly good guy, but not primarily an ideologue — he tempers his positions according to the political situation.

What is disconcerting is that his deputy will be Ofer Shelah (Yesh Atid), a leftist with anti-“settlement” leanings. We’ll see in coming days how resolute and strong Ya’alon is. Ya’alon had been Minister of Security Affairs. That ministry has been cut and I would assume security affairs will be subsumed within the Defense Ministry.

Ze’ev Elkin (Likud), one of the good guys, is being replaced as Coalition Head by Yariv Levin, and it is not altogether clear as I write what role Elkin will play. Elkins co-chaired a Knesset Caucus on the Greater Land of Israel, and I’m waiting to see where he goes with that.

Yuval Steinitz (Likud), who was Finance Minister (and a good one), is being replaced by Lapid, and will be Energy and Water Minister.

Gideon Sa’ar (Likud), who is being replaced by Piron as Education Minister, will be Minister of Interior.

Yuli Edelstein (Likud), another of the good guys, is going to be Knesset Speaker, replacing Ruby Rivlin. Edelstein was Minister of Public Diplomacy and Diaspora Affairs. That ministry has been cut, and it is not clear which ministry will pick up this work.

You can see a full line-up here, but keep in mind that there may still be some adjustments, and that this was drafted before Bennett and Lapid were told they would not be Deputy Prime Ministers.

It will, undoubtedly, be necessary to return to the political issues.

But our focus now very badly needs to be on the presidential visit and a host of problems of huge proportions that we must contend with.

Whatever my comments about Netanyahu being the loser in an internal political struggle, the fact remains is that he is our prime minister and will be facing down Obama in just days.

In this, I will voice support and prayers for his strength. May he keep his eye on the principles that matter for all of us here in Israel. And may our people come together in order to contend with major problems.

SOS at CPAC: “Where’s Admiral Gaouette?” and the “Benghazi CBA”

See the liar lying and getting away with it.

Senator Feinstein says she is not a 6th grader and she comes from a different place than Sen. Cruz, who would honor his Oath of Office to the Constitution. She claims “weapons of war” are not to be included in our Second Amendment protections. Yet, Senator Cruz did not ask her why then does the 2nd Amendment read, “A well regulated Militia, being necessary to the security of a free State, the right of the people to keep and bear Arms, shall not be infringed?”

What is a militia if not a body of warriors who are to be fully capable as free and locally organized infantrymen?

Who are these people trying to kid? Clearly, the right to keep and bear the firearms of infantrymen are protected by the Second Amendment, and militias of our free people were to be locally regulated, typically by means of the duly elected sheriff. (These are not the National Guards as they are now designed.)

The founding fathers specifically framed the Second Amendment for the Sovereign People to be ready, willing, and able to overthrow the violent (i.e. rights violating) usurpations of our powers that these very neo-Marxists of the Democratic Party seek. It is purposed to maintain as the Declaration of Independence mandates, not only the “right” but the “duty” of the People to throw off despotism, when government consistently violates instead of guards our Unalienable Rights.

The founders laid it out clearly that we must have this power, either as a deterrence, or sadly as a remedy.

This must be honestly and honorably sounded out, however the politicos and their lawyers and judges may dissemble. Our founders, such as George Mason, George Washington, Samuel Adams, Patrick Henry, John Adams, and Thomas Jefferson, made it thoroughly clear.