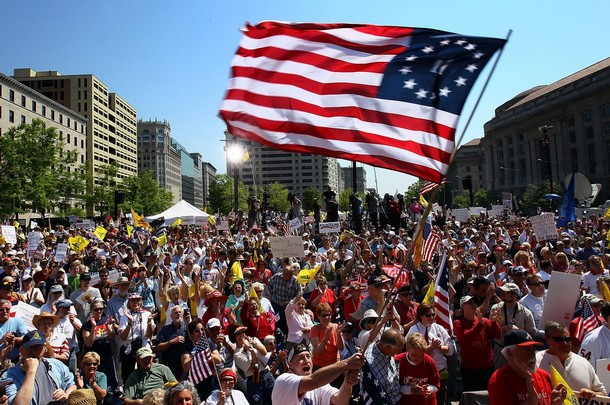 Barbara is white, sixty-something and writes Christian musicals. She told a mutual friend, “Lloyd is a good guy, but I disagree with his association with the Tea Party.” Shocked, our friend shared Barbara’s concern with me. I thought, “Barbara, you ARE the Tea Party.”

My friend Barbara is representative of the mainstream media’s despicable evil slander of millions of well informed, decent hardworking Americans who love their country and reject it being transformed into a socialist kingdom in which government controls every aspect of their lives.

Who are these Tea Party people, their profile? When I first began touring the country on Tea Party Express, the attendees were mostly middle-aged whites. Many, trying to be “good people”, voted for America’s first black presidential candidate. But, as Obama began implementing his big government socialist agenda, they realized their error.

I was one of probably five blacks in America who did not vote for Obama. When Obama told Joe the Plumber he wanted to “spread the wealth around”, a little voice in my brain said, “Danger! Danger Will Robinson! This guy (Obama) is a socialist!”

At those first tea party rallies when the movement was new, many whites in attendance still felt extremely uncomfortable opposing Obama. Countless times I was told by patriots, fighting back their tears, that their opposition to Obama had nothing to do with his race and everything to do with his agenda. I knew they were sincere.

This is why the mainstream media’s relentless slander of these good people, attempting to portray them as mobs of racist violent haters, so infuriated me.

Tea Party attendees are the salt of the earth Americans. They have jobs. They have businesses and families which they bring to the rallies. They love their country. They have kids in the U.S. Military. Many attend church. They do not hate minorities. They do not suppress women. As a matter of fact, many Tea Party group leaders and organizers are women. Tea Party folks want every American who is willing to work for it to achieve their American Dream. Pure and simple…end of subject.

My friend Barbara who fell for the MSM lie that the Tea Party is nothing more than a massive hate group would fit right in if she ever attended a Tea Party event.

When the Occupy Wall Street Movement emerged, once again the MSM slapped the Tea Party in the face by praising OWS as the morally superior Left’s answer to the Tea Party. Well excuse me, but no one has been raped, robbed, beaten or arrested at a tea party; all of which are regular occurrences at OWS gatherings. http://www.foxnews.com/us/2011/11/09/rash-sex-attacks-and-violent-crime-breaks-out-at-occupy-protests/

OWS dumped a bucket of feces in a bank lobby along with numerous incidents of destruction of property. http://www.huffingtonpost.com/2012/03/22/occupy-wall-street-feces_n_1372293.html

One point seven million tea party folks gathered in DC to protest Obamacare leaving the park cleaner than when they arrived.

The profile of blacks who attend Tea Party rallies. As I said, when the Tea Party movement first began, I was a rare black face in the crowds. Over the years, more blacks began showing up. Excited and curious, I would interview them, “What made you show up today?”

Interestingly, the blacks in attendance were either entrepreneurs/business people or they served in the U.S. Military and had witnessed the negative effects of socialism abroad.

Foolishly sacrificing principles to court misinformed voters, the GOP has joined the MSM’s gang assault on the Tea Party. Their mantra is, “The Tea Party is extreme!”

I struggle to maintain my composure upon hearing low-info idiots parroting the MSM’s claim that the Tea Party is extreme. Will someone please tell me what is “extreme” about expecting our government to function according to the U.S. Constitution? What is extreme about not sheepishly going along with government dismantling our God given freedoms and liberty?

Despite being badly bruised and abused from all sides, the Tea Party is the only hope for restoring America back to the vision of our Founding Fathers.

Who are these tea party guys, really?

I suspect millions of Americans who have never attended a Tea Party event love their country – still believe success is achieved via hard work rather than government redistribution – still believe marriage should remain between one man and one woman – believe government does not have authority to override the 2nd Amendment to disarm us or force us to fund behaviors which go against our religious convictions.

If you are one such American, the Tea Party is you.