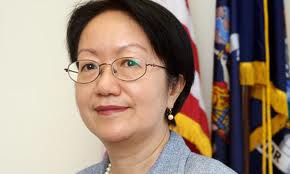 Margaret Chin is a New York City Council member. She was elected to the Council in 2010 as the representative for District 1, lower Manhattan. She is Chair of the Committee on Lower Manhattan Redevelopment and is a member of the Committees on Education, Small Business, Civil Rights, Women’s Issues, Aging and Public Housing.

Chin is a member of the New York City Council Progressive Caucus and the Women’s Caucus. She has twice been elected by her colleagues to serve as an executive member of the Black, Latino and Asian Caucus.

Margaret Chin was formerly the Chairperson of the New York Immigration Coalition. She was a board member of the Association for Neighborhood and Housing Development and chaired the Advocacy Committee. Margaret Chin was a founding member of Chinatown Partnership Local Development Corporation and served as the vice-chair of the board. Additionally, she served as chair of the Census Bureau’s Race and Ethnicity Advisory Committee on the Asian and Pacific Islander Population for Census 2000.

In 2003, Chin was a Fannie Mae Foundation Fellow at the John F. Kennedy School of Government at Harvard University.

Margaret Chin immigrated to the U.S. with her family from Hong Kong in 1963 when she was nine years old. She grew up in NYC Chinatown and attended P.S. 130 and JHS 65. She graduated from the Bronx High School of Science and from the City College of New York (CCNY) with a degree in education. It was at City College through taking Asian Studies courses that Margaret Chin got involved in “community organizing” – and the pro-China/North Korea Communist Workers Party.

For many years, Margaret Chin worked for Asian Americans for Equality, an organization that she helped to form when she was in college. As the Deputy Executive Director, Margaret led the organization’s work in advocacy, community organizing and coalition building. She fought for the preservation and building of affordable housing, better access to government services, equal opportunity and fair treatment for immigrants, low income and working families. Chin left her position at AAFE at the end of August 2008 to focus on her City Council Campaign.

AAFE is basically an extension of the Communist Workers Party and helps to infiltrate former Maoists into top posts in the New York business community, state government and the Democratic Party.

During the 1980s, the Communist Workers Party was acquiring a local power base in Chinatown, New York, working primarily through AAFE. The latter did not avow its connection with the CWP, but for years the two groups shared an office and phone number, and CWP veterans had a way of turning up as Asian Americans for Equality leaders.

Ms. Chin’s rise in the world tracked AAFE’s. In 1986, backed by the Village Independent Democrats, she won election to the Democratic state committee from the 61st Assembly District. Since her reelection in 1988, she has graced official women’s committees for David Dinkins, Mario Cuomo and Robert Abrams, and Asian-American committees for Carol Bellamy and Deborah Glick.