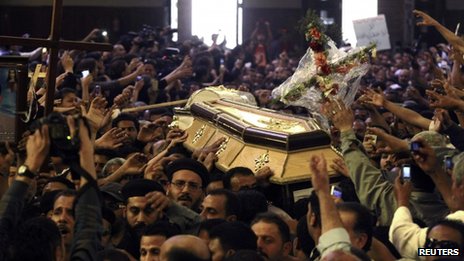 On the afternoon of Sunday, April 7, Egyptian police surrounded and protected Saint Mark’s Coptic Cathedral of Cairo, the headquarters of the Coptic Pope, after four hours of attacks on the church by Muslims throwing Molotov cocktails, rocks, and firearms, and where Christians gathered to mourn their dead.

A liturgy was being held for eight murdered Christians resulting from a bloodthirsty rampage by Muslim vigilantes three days earlier on Friday afternoon. Muslims took revenge upon an entire Christian neighborhood in reaction to an incident a few hours earlier where a Christian male defended the life of a Christian girl under assault by a Muslim.

Now inside the church, Bishop Rafael spoke to the Christian body, “… We believe in Heaven’s justice, and the teaching of Jesus Christ reveals to us that the blood of the Martyrs will not be forgotten by God.” 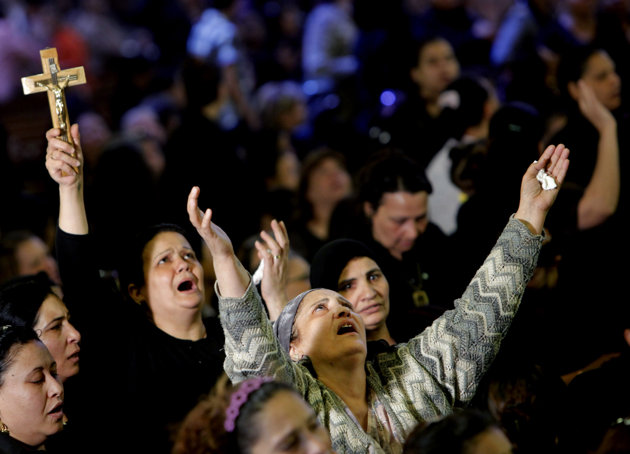 The sequence of these earlier events took place in the streets of Al Khosous just outside Cairo, a town of about three million with a Christian majority, where first an attempt to stop a would-be rapist or kidnapper flared into a fight between the Muslim attacker and a brave Good Samaritan (the Christian man). In a fierce defense of the innocent Coptic girl, knowing that all too often such assaults mean a Christian female will never see her family and home again, the Christian man fatally wounded the Muslim assailant.

Within hours of this horrible incident, revenge stirred in Muslim neighborhoods drummed up by the family of the dead Muslim man. A general state of panic and terror ensued. Groups of Muslims attacked a Baptist Church setting it on fire. Carrying weapons and Molotov Cocktails Muslims destroyed the homes and businesses of Christians and looted the contents.

Both Muslim and Coptic citizens who witnessed the tragic eruption phoned Cairo radio and TV stations desperately appealing to them to broadcast a request for the police to come to the scene of the crime hoping to have law enforcement intervene before the situation degenerated further.

This Muslim reign of terror massacred eight Christian men and one Muslim. After the rampage against Christians had ceased, law enforcement appeared on the scene – customary procedure in Egypt’s recent history. Between a similar incident in Al Kusheh in 2000 and the Maspero one in 2011, every Muslim attack upon Christians occurred under the watchful approval of the Egyptian state police.

Voice of the Copts requests that Europe and the United States attach stated conditions to the taxpayers’ funds promised to the Morsi regime demanding that true evidence must first reveal that Egypt practices equality of human rights and equal justice under the law.

We ask that leaders of the Western church, as participants in interfaith dialogue, request leaders of the Muslim faith to publicly voice their opposition to the mistreatment of Christians and non-Muslims in general in Egypt and elsewhere where Islam is practiced and remains the dominant ideology.

One thought on “Muslims attack Coptic Cathedral in Cairo”