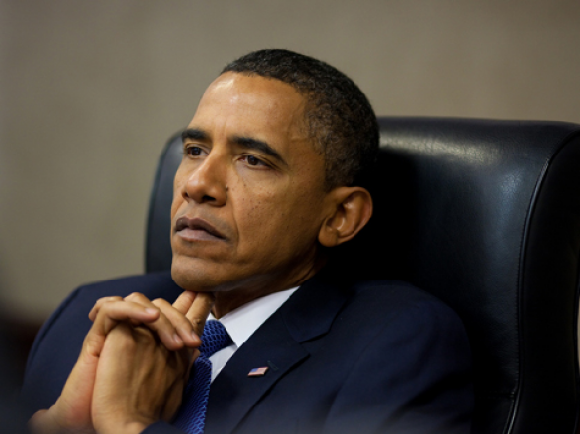 The path to rule by executive order by the Obama Administration runs directly through the U.S. Court of Appeals for the D.C. Circuit. “There are few things more vital on the president’s second-term agenda,” Constitutional Accountability Center president Doug Kendall told The Washington Post last week. “With legislative priorities gridlocked in Congress, the president’s best hope for advancing his agenda is through executive action, and that runs through the D.C. Circuit.”

Currently, the D.C. Circuit, which is considered one notch below the U.S. Supreme Court and deals with many challenges to executive branch actions, has four openings. It currently has four Republican appointees and three Democrats. This is the same court that ruled in January that President Obama lacked the authority to make the three recess appointments he made to the National Labor Relations Board.

As the White House looks to pack the court with those favorable to its causes, so too the media swallow whole the Administration’s agenda. “What’s different now, says Mark Jurkowitz of the Pew Research Project for Excellence in Journalism, is new technology that allows the White House to distribute its own content far more widely and effectively than past presidents could,” reported the Associated Press. “At the same time, it’s getting harder for cash-strapped news outlets to resist using photos, video and other content supplied by the White House” (emphasis added). It’s also easier to just take statistics from the White House rather than to do additional research. And the media have never been more willing accomplices than with Obama.

One statistic provided by the White House that has been bandied about by several news outlets, including The Washington Post and Mother Jones, is that “Overall, President Obama’s judicial nominees wait an average of 116 days on the Senate floor for a vote […] more than three times longer than President George W. Bush’s judicial nominee average wait time of 34 days.” And, according to the Post’s Juliet Eilperin, “At this moment 15 such nominations are awaiting a Senate floor vote, 13 of which made it out of committee unanimously.”

“The White House has begun to make a public case for moving faster, though it has not engaged in the sort of horse trading that usually helps ease legislative logjam.” In other words, getting judges confirmed is important to the President, but not important enough to compromise on his legislative agenda.

“A reader might imagine that the reporter is making an intelligent apples-to-apples comparison,” when citing this statistic, noted Ed Whelan for National Review. “But in 2005—the first year of President Bush’s second term—the Senate hadn’t confirmed any of Bush’s nominees by this date. (It of course had confirmed nominees in previous years.)”

The average number of days from nomination to confirmation was 171 days for Bush’s district court nominees and 366 days for the circuit-court nominees from 2001 to 2006, according to the Congressional Research Service (pdf). As for Bush’s nominees confirmed in 2005, as Whelan outlines, they each took between seven months and four years, when measured from nomination to confirmation—and none were confirmed by the beginning of April 2005. He describes the Obama Administration as 0 for 1 so far, since Caitlin Halligan is “the first D.C. Circuit nominee that Republicans have defeated.”

Eilperin cites a figure from Sen. Charles Grassley’s (R-IA) office, that the Senate has confirmed 178 of President Obama’s nominees to the federal bench, while rejecting only two.

While Obama is seeking to “shift” the “conservative tilt” of a key court, as reported by The Washington Post, Bush’s legacy is that of pervasive conservatism with the “potential to affect the law in America for decades.” This double standard has an underlying message: courts in the U.S. should be less conservative and more liberal. Thus, Eilperin asks in her article “How controversial are President Obama’s judicial nominees?” “Senate Republicans are giving President Obama and Senate Democrats what JonesDay partner Michael Carvin calls ‘a taste of their own medicine,’ by filibustering otherwise non-controversial nominees,” she asserts. If that’s so, it’s not a terribly dramatic phenomenon, given the statistics above. But then again, it looks way more dramatic when you use the White House numbers, as Eilperin did.