By: James Simpson
Accuracy in Media 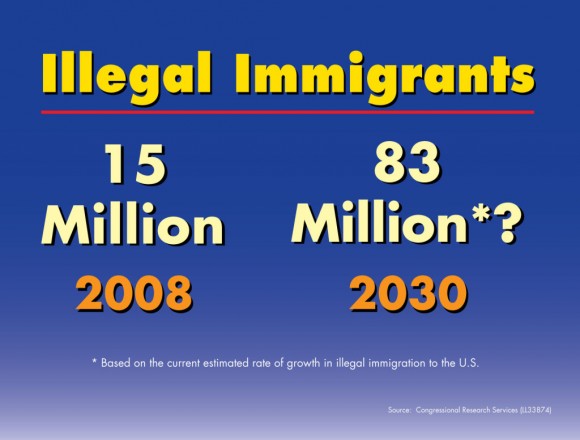 As we once again face the specter of illegal alien amnesty, and the permanent Democratic majority it will guarantee, it is critical to understand how the Left plays. They are unethical to the core, but we are so frequently deluded by their tactical use of language and emotion, that we are unequipped to deal with them effectively. The result: they win. This cannot happen again, unless we are all willing to start calling Obama “President for Life,” and Democrats, the “Commissars.”

Changes in public perception happen gradually. This is a natural human survival strategy that mistrusts the unfamiliar. A campaign of public education has become necessary to help convince a wary public to accept new ideas or policies that might otherwise take too much time. But there is a difference between education and propaganda.

Our nation’s laws constitute a contract that every citizen implicitly agrees to respect. Those who violate it face sanctions of corresponding severity. If certain individuals can avoid sanction and gain special privilege through political power—despite their blatant violations—then the rule of law becomes meaningless, and is replaced by a society based on political power alone. That is called dictatorship. Yet this is what the illegal immigration lobby wants us to accept.

When individuals or organizations attempt to introduce ideas that are self-evidently destructive, like Nazism or communism, for example, a campaign based on propaganda is necessary. Unlike factual information, propaganda manipulates, using fear and instinct in combination with known psychological reactions. It is evident that the illegal alien lobby uses these methods.

Maryland’s illegal alien advocacy group CASA de Maryland inadvertently provides a good starting point for this discussion. CASA’s resource page references a study by the Equal Rights Center titled “10 Harmful Misconceptions About Immigration.” It is an artful weave of straw man arguments, half-truths and outright lies. Every single “misconception about immigration” is not really a misconception at all. But they are able to argue it as such by revising or re-setting definitions.

First we have Immigrants:

Then we have “Undocumented” Immigrants:

Foreign-born individuals who (1) entered the country illegally, (2) overstayed their visas, or (3) work without authorization

How many illegal aliens are “scholars, scientists and engineers?” Here’s another screecher:

One of every four engineering and technology companies started in the United States between 1995 and 2005 had immigrant founders.

Surely these were all illegals, too?

Overall, the fiscal impact of immigration on public-sector budgets is small and likely to be positive in the long run.

But illegals are almost entirely low-skilled. The Heritage Foundation’s Robert Rector estimates that federal, state and local governments spend three dollars in welfare benefits for every dollar received from low-skilled immigrants. It will get even worse if amnesty is granted to these people because they will have access to even more benefits, but will likely not improve their earning capabilities commensurately.

Rector claims that retirement costs for illegals granted amnesty could run to $2.5 trillion. Providing amnesty for illegals would result in chain migration of as many as 100 million people, he argues. The vast majority of those would have the same profile as illegals currently here with the result of added budgetary, legal and cultural strains.

Regardless, according to the Associated Press and USA Today, among others, illegal aliens must now be referred to as “undocumented immigrants.” Calling them anything else can lead to charges of racism, or worse. Logic and truth are out the window.

The term “Hispanic” represents a category of people who do not exist in the real world. It became official with congressional enactment of Public Law 94-311 in 1976. As explained in Social Contract:

…the word “Hispanic” is devoid of meaning and legitimacy. It does not denote a racial, ethnic, linguistic, or cultural group. It is an artificial term created to maximize political power for extremist elements within the Spanish-speaking minority.

This law, which was endorsed by several “Hispanic” organizations including the League of United Latin American Citizens (LULAC) and La Raza, contained two significant elements: (1) the subject: “Americans of Spanish origin or descent,” and (2) the legal status: “American citizens.” Both qualifiers were soon dropped in an effort to maximize political influence by maximizing numeric size.

In 1977, the Office of Management and Budget (OMB) adopted the shorter title of “Hispanic”… Since then, “Hispanic” is defined as “A person of Mexican, Puerto Rican, Cuban, Central or South American, or other Spanish culture or origin, regardless of race.” The new definition sought to further inflate the numerical size of the “Hispanic” community.

According to Mark Lopez of the Pew Hispanic Center:

[A]bout two-thirds of Hispanic-Americans identify themselves not as belonging to the general Latino culture, but to their specific country of origin or their parents’ homeland.

“The notion of a pan-ethnic identity is actually an American concept,” said Lopez, an American citizen whose grandparents emigrated from Mexico. “If I go to El Salvador and I say I’m Hispanic, they’re going to think I’m from Spain, or they’re not going to know what that means. They don’t see a pan-ethnic identity. They see themselves as Salvadoran.”

Activists can’t even decide if they should use the world “Hispanic” or “Latino.” A study called “Latino or Hispanic Panic” said 75 percent of activists don’t like either term. Of those that do:

In Texas, a Pew Hispanic Center poll found that 45% of Latinos prefer the term Hispanic and 8% prefer Latino. Note this leaves 47% of Latinos in Texas who prefer neither term. In the other four most populous Latino states—California, New Jersey, Florida and New York—the Pew poll found that people are more likely to prefer “Latino.”

Finally, not every Hispanic is a Hispanic! At a Swarthmore College lecture titled, “Is Antonio Banderas Latino?,” Professor Rodolfo Francisco Acuña asserted that being “Latino” is a function of “life experience,” meaning that one had to experience racial or class discrimination to earn the title “Latino.” “No matter what people may think of Banderas as a person, he is European and not part of a class that has historically suffered discrimination.”

So, in other words, you are only a Hispanic/Latino if you are the “right kind;” one who will ascribe to the ideological goals of the Left. What does this mean for all those “economic migrants?”

CASA, however, sees it for the political advantage:

Casa of Maryland, which advocates for immigrant rights, views the Hispanic community as a single bloc “because together they have greater power as a community to address issues that are affecting one particular nationality or all,” advocacy specialist Helen Melton said in an email.

So does one of CASA’s biggest political supporters, Maryland Delegate Ana Sol Gutierrez: “Everybody is feeling the need to come together because it’s only larger political forces that are going to be able to change the negative climate we’re facing.”

Next comes intimidation. CASA and the other open borders advocates subscribe to the all-too-familiar tactic of painting their opponents as racists. However, these groups have all demonstrated themselves to be distinctly racist in their adamant demands for illegals. They also frequently resort to intimidating hate speech. In their own words:

Mexican American Legal Defense and Education Fund (MALDEF) founder Mario Obledo said: “California is going to be a Hispanic state, and anyone who doesn’t like it should leave. They should go back to Europe.” “Eventually,” he said the following month, “we [Hispanics] will take over all the political institutions of California.”

Former NCLR [National Council of La Raza] President (1974-2004) Raul Yzaguirre called proponents of California proposition 187, which would have denied budget-busting social services to illegals, “racists” and “xenophobes.” Prop 187 won but was blocked by a judge. They got their way and California is now bankrupt.

He also said, “US English is to Hispanics as the Ku Klux Klan is to blacks.” Hillary Clinton appointed Yzaguirre to co-chair her presidential campaign.

When Minutemen volunteers declared they would monitor CASA’s day labor centers for illegals, CASA president Gustavo Torres said: “We are going to target them in a specific way. Then we are going to picket their houses, and the schools of their kids, and go to their work…”

Left’s Application of the Dialectic

The illegal alien lobby, like most well-trained leftist movements, follows a multi-tiered offensive strategy. This includes in-your-face agitation, public demonstrations, vilification of opponents, direct threats, aggressive legal tactics (i.e., suing and threats of suits) and massive, coordinated legislative assaults. These in turn all reflect their application of the Dialectic:

Thesis—For the illegal alien lobby, the “thesis” is the deliberately provocative proposition that illegals are only “undocumented,” or of a certain “perceived immigration status,” or, using Maryland Governor Martin O’Malley’s terminology, merely “New Americans.” As such, they should be granted all the privileges of citizenship and more.

Antithesis—The “Antithesis” is our collective outrage at such an overtly fraudulent notion. It is the natural and anticipated backlash—in Lenin’s words, the “forces of reaction” which set us up for more outrages, as the Marxists respond even more forcefully to our “injustice,” our “racism.” Such “reaction” is only to be expected of “Imperialists.”

Synthesis— “Synthesis” is the marriage of compromises wherein “cooler heads prevail.” This standard Marxist tactic relies on the natural human tendency to compromise in the face of conflict.

Under normal circumstances, this might be described as a simple way to model the give-and-take of the usual negotiation process, but there is nothing usual about it when dealing with Marxists. The compromise always comes from our side, because the Marxists start from the preposterous position that people who deliberately, flagrantly violate our laws should not be singled out for any kind of consideration other than jail or extradition. Exceptions are already provided in law for those refugees or asylum seekers who come to America under genuine duress, but even these programs have been horribly abused by the open-borders lobby.

Yet even in the case of radical ideas like amnesty or in-state tuition for illegals, over time, common ground between the opponents is found, as the radicals repeatedly pound away at elected officials with the same proposals while their street operation gets ever more strident, threatening and demanding. Meanwhile, those less scrupulous politicians who see gain in supporting such groups are emboldened, especially if the media put a compassionate spin on the group in question. Eventually, politicians give in, finding some pretext like requiring military service, or paying fines or back taxes.

Using this method, the Marxists usually get more than they bargained for, despite the fact that their demands have no legitimacy whatever. Furthermore, it never stops. Once one “right” has been established, new ones are dreamed up until there is nothing left to give. Recall the quote from MALDEF’s Obledo: “Eventually we will take over all the political institutions of California.” He means it. When dealing with Marxists, the “moderates” compromise away our rights, our livelihoods and our country to people and agendas that are inherently destructive to our society.

This is a fight we cannot afford to lose. As Congress goes with amnesty, so goes the nation.

James Simpson is a former Office of Management and Budget (White House budget office) economist and budget analyst. He is currently a businessman and freelance writer. Best known for his exposé on the Cloward Piven Strategy of manufactured crisis, his writings have been published in American Thinker, The New Media Journal, Washington Times, FrontPage Magazine, Whistleblower, DefenseWatch, Soldier of Fortune and others. His blog is Truth and Consequences. Email James.