Soon coming to a town near you! 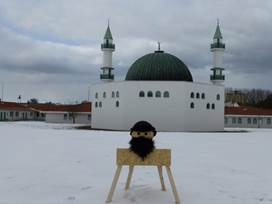 The TOUR – Lars Vilks Mohammad dog on the run!

The Roundabout Dog TOUR – ”The Tour” – is an active campaign aimed at creating awareness about the vulnerability of Freedom of Speech in the “new” multicultural world.

Using the Swedish artist Lars Vilks’ known seal, The Roundabout Dog (Rondellhunden), as the crucial pivot point, the TOUR will visit seven countries in Europe, from 1 April to 30 September, 2013, beginning in Sweden. The other six countries are Norway, Denmark, Germany, Holland, Austria and Switzerland.

The TOUR began in Malmö on March 26th with a visit to the Islamic Center founded by the deceased Qaddafi and still owned by the Libya-based World Islamic Call Society.

“Due to security concerns, we cannot disclose our tour plan, but the Roundabout Dog was always about surprise, so we will continue in that spirit,” says Hans Erling Jensen, the initiator of the project. “It is our hope, of course, to start discussions about freedom of speech. Do we Europeans really want the artists to continue their self-censorship, or do we want a society where everything can be criticized and made fun of?”

For more pictures which you are free to use: http://en.freespeech.nu/press

THE TOUR has more than one purpose. We wish to draw attention to the fact that freedom of expression has increasingly tighter conditions in the easily offended multicultural Europe.

Another objective is to generate public interest in Lars Vilks and his art, which we believe – with Lars Vilks vulnerable position as a fatwa-persecuted artist – deserves to be seen and acknowledged by a much wider audience than it is now possible to reach because of the prevailing political correctness in the existing artistic environment.

Lars Vilks has faced numerous death threats and a suspected assassination plot since his drawing of the Muslim prophet with the body of a dog which was first published by Swedish regional daily, Nerikes Allehanda, in 2007.

FREE SPEECH EUROPE has planned a series of quick-exhibitions for the “Grand Tour” where Lars Vilks will be present introducing his original art work and will speak about his life under siege! Denmark, Germany, Austria and London are actual locations.

The initiative to FREE SPEECH EUROPE was taken in the Fall of 2012. The association is non-political and its purpose is to promote freedom of speech by supporting people who are victims of “blacklisting” or other forms of persecution because of their artistic or political expression.

Our focus is on Lars Vilks, who, when his Roundabout dog was born in 2007, lost his livelihood; this can hardly surprise anyone.

We cooperate with a number of organizations, blogs and individuals with regard to promoting the TOUR and to helping us market the Lars Vilks art package that will help to ensure the economy of the tour.

We want to do much more, but our funds are limited. Our heroes Lars Vilks, Kurt Westergaard, Robert Redeker, Flemming Rose, Salman Rushdie, Lars Hedegaard and many others, are persecuted all year round by those who would prefer to see our freedom limited. Sign up for membership here!

It is possible to support Free Speech Europe and the tour by buying copies of four beautiful Vilks paintings depicting Muhammed as a dog on a table, as a dog on a bed with a naked lady, on a t-shirt on a lady and his chopped off head in the hand of what looks like an androgynous version of the Goddess of Justice.

Pics and other stuff for downloading, free to use in its meaning!
http://en.freespeech.nu/press