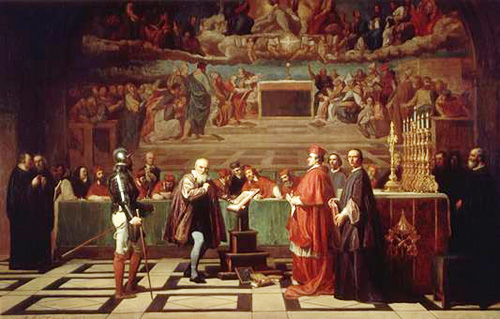 Galileo before the Holy Office, a 19th century painting by Joseph-Nicolas Robert-Fleury.

In the week just past, a decision was made by the high priests of the Bavarian Office for the Protection of the Constitution (BOPC), that poses a profound threat to freedom of expression. They declared that the Bavarian branches of Politically Incorrect and the Die Freiheit political party are potentially a threat to the Constitution. They are effectively accused of stirring up hatred of Muslims, a charge that seems to have more to do with the influence of oil money that is sloshing about from rich Islamic states than it is about any real hatred of Muslims.

This means that the state regards such groups as a potential danger to security. It means that they will be closely monitored by the authorities. It also means that members of such groups will be stigmatized and demonized. The state has intervened on behalf of one side in a perfectly acceptable political debate. As such it has interfered with the normal workings of a democratic society and it sets a dangerous precedent for the future.

This decision harkens back to an earlier, less tolerant age! Colored by its recent action, the “Bavarian Office for the Protection of the Constitution” begins to sound like the 16th century “Supreme Sacred Congregation of the Roman and Universal Inquisition” or Saudi Arabia’s “Committee for the Promotion of Virtue and the Prevention of Vice.” Like these rather disreputable institutions, the BOPC is now attempting to dictate what people say with regard to the philosophical issues of religion and belief.

It is ironic that it is Bavaria, that cradle of National Socialism, where freedom of speech is once again being curtailed nearly 70 years after consigning that repulsive enemy of freedom to the dustbin of history. There are those who have said that the fascists of the future will come in the guise of anti-fascists. This would appear to be an example of that phenomenon in the present. The actions of the Bavarian authorities speak for themselves – being against free speech is a hallmark of fascism. The state is effectively telling people what they can think. As such, it has overstepped the bounds of reasonable behavior. When considering the attitude of the false prophets of the BOPC, it might be appropriate to consider the following Biblical passage:

“Beware of false prophets, which come to you in sheep’s clothing, but inwardly they are ravening wolves. Ye shall know them by their fruits. Do men gather grapes of thorns, or figs of thistles?” (Matthew 7:15-16, The Bible, King James version)

In a free and democratic society, any religion that attempts to shape politics must be subject to scrutiny. Tolerant followers of any proselytizing religion, must surely agree that people will provide counter arguments. Otherwise the marketplace of ideas could not function and social progress would be stifled. Europe’s Inquisition did not grasp this and the Bavarian authorities seem to struggle with the concept.

A key consideration relates to whether Islam is political. The Organization of Islamic Cooperation (OIC) is the acknowledged voice of the Islamic world. Its persistent demands for sharia compliant blasphemy laws in Western countries demonstrates a determination to shape policy. Even if Islam is not political in its essence, the activities of the OIC put it clearly in the political realm. Islam has therefore become of justifiable interest to Western citizens. In democracies, matters of public interest must be up for debate if the essence of such societies is to survive. The action of the Bavarian authorities towards the organizations cited strikes at the very foundation of democracy itself.

People have a right not to be Muslim. They also have a right not to follow Islamic dogma and not to be subject to sharia. The Bavarian authorities have accepted the sharia principle that Islam and its Prophet are beyond criticism. They have conveniently ignored the irrefutable fact Sharia has a second class place for non-Muslims built into it. From an Islamic perspective, non-Muslims in a land dominated by Islam are obliged to fit into that system.

In many ways, this draconian announcement is not about Islam at all. It is about a political transition from a democratic system to one based on oligarchy. Those with power are cynically using Islam to achieve their totalitarian goals. The claim that it is ‘to protect the Constitution’ has as much credence as the claim of the OIC that it is an advocate of religious freedom. It is crystal clear from the authority’s actions that those who run Bavaria, favor the creation of a highly controlled society.

This sort of thing will be happening in more and more Western countries as governments consolidate their on-going crackdown on dissent and dissenters. The transition to an oligarchical system is already underway. It is time for people to make the decision to either raise their voices or accept that in the near future they will not have a say in how their society is run. The words of Martin Niemöller once again ring true:

“First they came for the communists,
and I didn’t speak out because I wasn’t a communist.

Then they came for the socialists,
and I didn’t speak out because I wasn’t a socialist.

Then they came for me,
and there was no one left to speak for me.”

Video about the story: