Right Side News
From: Vlad Tepes 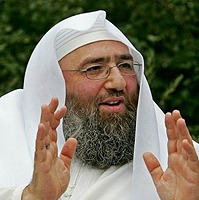 Sheikh Omar Bakri Muhammad “What do we want?” – “Jihad!”

Omar Bakri Mohammed lets us into his home in Tripoli, in Lebanon. At first glance a normal father but this man is the founder and spritual leader of the Shariah movement throught Europe. A hate preacher with close ties with the terrorist network of Al Qaeda.

Omar Bakri Mohammed knows our country well. He knows that his disciples together with other followers of Shariah4Belgium were arrested last week because they were accused of recruiting Belgian youths for the conflict in Syria.

Bakri says the arrests are an attack on Muslims and they have the right to strike back.

“Oh my God! You are really in a war against Islam, and we are still see you as the unfriendly neighbour and this is where you are playing with fire.”

Q: “What do we risk if we are playing with fire.”

A: “If you play with fire, you will burn yourself. You will get a shock and you start after that to suffer.”

But Bakri has a direct line to radical fighters’ groups in Syria. He is actively recruiting Muslims to join the fight. “These are not allowed to leave this country but, er, I will incite people to go to fight because as God says, encourage the believers.”

Bakri named his youngest son after Osama bin Laden. a tribute to the great leader. “Osama was born on the day it was announced that Sheikh Osama has passed on, maybe he’s the one who will be the Obama of his time. Osama will be with Obama.

So we will revenge.”