And thank Heaven that we do…

Israel officials — government and military — have repeatedly said that we will not permit a situation in Syria in which “game changing” weaponry — whether WMD or missiles — is passed to terrorist forces. And we have shown, again and again that we do mean what we say and are willing to act on it. In the last few days, we’ve apparently (shall we say, “allegedly”) demonstrated this not once, but twice.

Because — as would be expected! — there is no official report from Israeli sources, I cannot provide precise information on what was (allegedly) entailed. Along with everyone else, I am relying on secondary sources — US and other foreign media — which secure their information in a variety of ways; and an unnamed Israeli official speaking off the record, after the news broke in foreign media. Many of these sources are referenced in Israeli media. Not all agree on particulars.

However, while it cannot be confirmed, that we have hit in Syria seems fairly certain.

The first hit came very late Thursday night or early Friday morning. It was reportedly accomplished from Lebanese airspace, it is believed without entry into Syrian airspace.

According to Reuters, as reported by YNet, Israel’s air force possesses so-called “standoff” missiles that, once fired, are able to coast dozens of kilometers across ground to their targets.

The most specific information — which was cited extensively elsewhere — came from yesterday’s NYTimes, which reported that what was hit were Iranian surface-to-surface missiles — Fateh 110 missiles, which carry a 600 kg. warhead, have considerable accuracy, and can reach most of Israel from southern Lebanon — that were being stored at the airport in Damascus and were likely due to be transferred to Hezbollah; the warehouse where they were held was believed to be under the control of Hezbollah and Iran’s Quds forces.

Citing foreign sources, who received information from Syrian rebel intelligence, YNet today also reported that a convoy that was in the process of transferring weapons to Hezbollah was hit on the road between Damascus and Beirut — in three separate strikes by Israeli F-16s, pictured below. Again, it is thought that these attacks were initiated from Lebanese airspace. And it may well be that the reference by Israel National News to sets of planes entering Lebanese airspace refers to these attacks, as well as the attack on the airport in Damascus. We might call these two prongs of one attack. 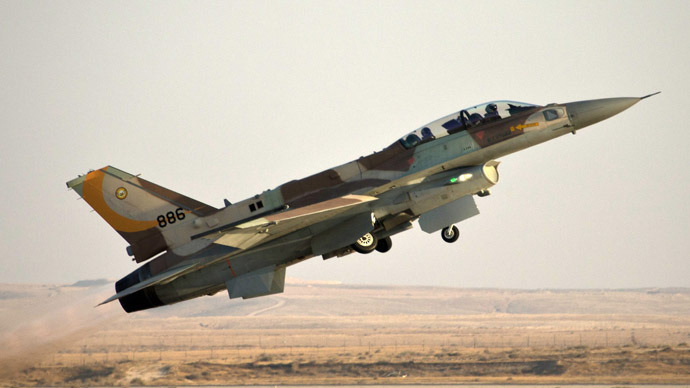 There was some thought that what was hit in the convoy were anti-aircraft missiles, but the best estimate seems to be that in this attack, as well, it was surface-to-surface missiles that were taken out.

Now very early this morning, there were media reports of major explosions near Damascus, as a military research center in Jamraya was attacked by rockets, with possible hits on two nearby sites as well — an ammunition depot and Republican Guard battalions.

At Jamraya, also, it is believed that Iranian missiles were targeted, but it seems less clear at the moment whether Israeli jets may have entered Syrian airspace.

If the name Jamraya rings a bell it’s because Israel hit there in January of this year.

Referred to as a “scientific research center,” this is a site of major military significance, where research is done and weapons are stored; its location near the Lebanese border makes transfer of weaponry easier.

Last night a Cabinet meeting was called to discuss the situation, and for the first time there was official comment of sorts:

In a couple of different venues, Deputy Defense Minister Danny Danon said, “The State of Israel is protecting its interests and will continue doing so. I am not confirming or denying the reports…We have said on various occasions in the past that we will do everything anywhere in order to protect those interests.”

Another Security Cabinet meeting was held this afternoon.

In the end, the precise process by which we accomplished the attacks, and the precise armaments that have been destroyed, are less important than the fact that we did act, and successfully.

The message being sent to Syria and Hezbollah, and by extension to Iran, is considerable. In fact, the most important message is to Iran, with regard to our meaning it when we speak about Red Lines.

At first, I read disclaimers by Syria and Iran saying they had no information on an Israeli attack. That’s one way to attempt to handle matters. No need to respond if nothing happened.

But in more recent hours there have been threats from both quarters: Syrian Information Minister Omran Zoabi says Israeli air strikes against targets outside of Damascus “opens the door to all possibilities.” And Syria’s Deputy Foreign Minister Faisal al Mekdad told CNN that the attack on a Syrian facility near Damascus is a “declaration of war.” While Lebanese media quoted Seyed Hassan Firouzabadi, the chief of staff of the Iranian armed forces, as saying: “Resistance forces will respond to the Israeli aggression… Iran will not allow to Israel destabilize the region.”

The IAF is carefully monitoring our northern skies, which have been closed to civilian air traffic, and we are on alert more broadly.

But as far as Syria is concerned, I do not believe there will be a direct attack. Assad may be ruthless and amoral, but he’s not irrational or stupid. His resources are sorely depleted, and if he wants his regime to survive, he will not take on a new battle with a stronger enemy.

Nor do I believe that Iran would attempt to hit Israel directly now. But in this instance, use of its proxy Hezbollah is a possibility (the threat by the Iranian chief of staff did come via Lebanon) — although I suspect there is only a small possibility with regard to a direct missile attack. Here, too, we are looking at an entity that is somewhat weakened and depleted. Hezbollah forces are in Syria fighting, and Shia/Sunni tensions have generated a downward spiral for Hezbollah.

President Obama, while saying that it is not his position to verify whether it was Israel that hit in Syria, was quick to say that Israel has a right to act to ensure that sophisticated weapons don’t reach Hezbollah.

My own guess is that this man who prefers not to act himself, and still hasn’t even decided whether to send arms to the Free Syrian Army, is delighted that Israel is acting.

True to form, UN Secretary General Ban Ki-Moon, who should be shipped out permanently, has taken his standard line: He is “gravely concerned” about the news of possible Israeli strikes in Syria, and he urges respect for sovereignty and territorial integrity. The head of the international agency that has turned a blind eye to the deaths of 70,000 Syrians has nothing to say with regard to what Israel does.

What both fascinates and bewilders me (it shouldn’t, I know) is that criticizing Israel is so politically correct in certain Muslim/Arab circles that it proceeds even when doing so is counterintuitive. Rebel forces have come out with criticism, when they should be delighted at anything that weakens Assad. But welcome an attack by Israel and appear to be — shock! — on the same side? Never.

The Arab League has issued a condemnation of Israel’s actions — and specifically, it should be noted, have Egypt and Turkey, both supporters of Syrian rebel forces, done so.

After a delay of some hours generated by the situation with Syria, PM Netanyahu has flown to China, where there will be discussions regarding Iranian issues and economic ones. A visit with major implications.