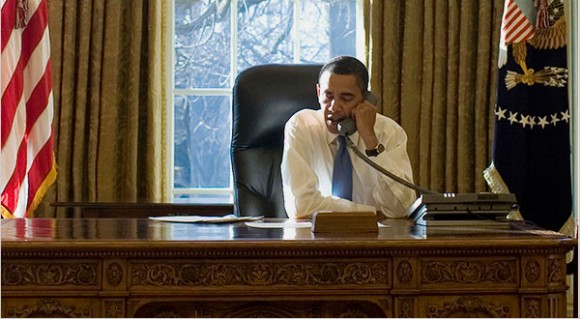 The Washington Post narrative surrounding the IRS’ targeting of conservative groups is that it began as a scandal involving low-level employees at a Cincinnati office, the “Determinations Unit,” a natural outgrowth of an increase in political activity by these groups. This belies other reporting by the Post’s Fact-Checker, which indicates that there was little growth in the number of groups applying for tax-exempt status at the time the targeting occurred.

As more details come to light, responsibility for the IRS actions keeps moving up the ladder and has landed, at least in part, at the White House. Top-level White House staffers knew about the scandal before a manufactured apology was made to the public on May 10.

“The White House on Monday once again added to the list of people who knew about the IRS investigation into its targeting of conservative groups—saying White House chief of staff Denis McDonough had been informed about a month ago,” reported Reid J. Epstein for Politico on May 20. White House Chief Counsel Kathryn Ruemmler said she learned about the IRS scandal the week of April 22, but didn’t tell the President.

A public relations storm was brewing, but the public is supposed to believe that the President himself was kept in the dark. “Press secretary Jay Carney said again that no one had told President Barack Obama ahead of the first news reports: not his top aide McDonough, nor his chief counsel Kathy Ruemmler, nor anyone from the Treasury Department,” wrote Epstein. “Monday’s revelation amounts to the fifth iteration of the Obama administration’s account of events, after initially saying that the White House had first learned of the controversy from the press.” Epstein called this the White House’s “shifting” account.

When Politico and the Post’s Fact-Checker, Glenn Kessler, note that the President’s story doesn’t quite add up, you know there’s trouble.

Indeed, IRS official Lois Lerner earned herself “a bushel of Pinocchios” from Kessler for her “misstatements and weasely wording when the revelations about the IRS’s activities first came to light on May 10.” After all, Lerner planted the question, asking Celia Roady to bring up the targeting scandal at an American Bar Association conference. Roady, though initially denying this deal, has now confessed that her question was planted.

“We had no discussion thereafter on the topic of the question, nor had we spoken about any of this before I received her call. She did not tell me, and I did not know, how she would answer the question,” maintained Roady. “I knew nothing!” seems to be the cry of everyone at the top who might be involved in this scandal. Perhaps that should be translated as “Please don’t put a target on my back!” like the IRS did to conservatives.

Although Lerner had had the opportunity to discuss the targeting at a Congressional hearing just two days earlier, she ended up doing it in a fabricated, closed environment. This is par for the course with this Administration. Democratic Representative Joe Crowley (NY) is calling for Lerner to be fired because he says she lied to him at that hearing. Lerner has indicated she will be invoking her Fifth Amendment rights during her appearance before the House Committee on Oversight and Government Reform on Wednesday.

On Tuesday morning, May 21, at a Senate Finance Committee hearing, chaired by Democratic Sen. Max Baucus of Montana, Sen. Charles Grassley (R-IA) asked whose idea it was and why they decided to use a “prepared Q&A” to bring this out. Steven Miller, the Acting Commissioner who was fired last week by President Obama, said that he was responsible: “I will take responsibility for that. The thought was, now that we had the TIGTA (Treasury Inspector General for Tax Administration) report, we had all the facts, we had our response, we thought we should begin talking about this, we thought we’d get out an apology. The way we did it, we wanted to reach out to Hill staff, about the same time [that the brief came out], did not work out. Obviously the entire thing was an incredibly bad idea.”

The IRS targeting of conservative groups was intrusive, at best. “A Tea Party group in Ohio reports that the IRS ‘wanted to know what materials we had discussed at any of our book studies,’” wrote Mark Hemingway for The Weekly Standard. “One educational group in Tennessee was asked to turn over the names of all the high school and college kids it had trained.”

“A pro-life group was asked to submit a letter in writing saying it would not protest Planned Parenthood.” In one case, the Coalition for Life of Iowa received a letter from the IRS office in Cincinnati requesting details about members’ prayers and whether they were “considered educational.” “’Please explain how all of your activities, including the prayer meetings held outside of Planned Parenthood, are considered educational as defined under 501(c)(3),’” read the letter, according to Chris Moody with Yahoo! News. This happened in 2009, when 1,745 applications for tax-exempt status were processed, long before the boom in numbers, according to Kessler.

Accuracy in Media has repeatedly demonstrated that these and other ridiculous requests were used to muzzle the free speech of organizations applying for tax-exempt status.

“No serious person who understands how things work really believes that the president picked up the phone and told the IRS chief to go after his enemies,” asserts Fox News commentator Bernard Goldberg. “But is it such a leap to assume that IRS agents and their bosses figured they were doing what the president would have liked them to do—but couldn’t ask?”

Similarly, Kimberley Strassel of The Wall Street Journal noted that the President did not need to direct the IRS’ actions, only call for this approach publicly. “Mr. Obama didn’t need to pick up the phone,” wrote Strassel. “All he needed to do was exactly what he did do, in full view, for three years: Publicly suggest that conservative political groups were engaged in nefarious deeds; publicly call out by name political opponents whom he’d like to see harassed; and publicly have his party pressure the IRS to take action.”

“Mr. Obama now professes shock and outrage that bureaucrats at the IRS did exactly what the president of the United States said was the right and honorable thing to do,” said Strassel.

The Washington Post’s Zachary Goldfarb and Kimberly Kindy reported that “At the same time, the IRS faced growing criticism from the outside that it was not doing enough to examine an increasing number of politically active groups seeking tax-exempt status.”

Another thing the President could do to further his agenda was to appoint officials who had a history of politicization. Former acting commissioner Steven Miller, who was asked to resign, told Congress that he didn’t think that the agency’s actions were political. Judicial Watch’s President Tom Fitton wrote that “At Judicial Watch, we know this well because, very early on, we were one of the many conservative organizations and Clinton critics that Miller’s tax exempt branch subjected to politically-inspired audits.”

“Steven T. Miller […] was one of several agents who investigated anti-Clinton organizations including Judicial Watch during that Democrat’s administration, according to court documents and interviews,” reported the Washington Examiner on May 14.

“Given our well-publicized experience with him, it is no surprise to me that Miller was content to allow this illegal IRS harassment of Obama’s hit list—and the subsequent cover-up,” argued Fitton.

Policies usually flow from the top, but The Washington Post would like its readers to think this one was organically created. It draws largely from the Inspector General’s report—hardly an impartial source. “The IRS is not well equipped to make political judgments,” write Zachary A. Goldfarb and Kimberly Kindy. “Its accountants and lawyers are sticklers and technocrats, trying to enforce the letter of the law. When the law is left vague—as it is for 501(c)(4)s and political advocacy groups—it could take years to come up with clear guidelines.”

Is that why the IRS took years to clear “Tea Party,” “Patriot,” and “9/12” organizations at the same time as it preferentially gave tax-exempt status to liberal groups? Is that why it only took one month to approve the Barack H. Obama Foundation?

“They created a spreadsheet of group names and activities to watch, called a ‘be on the lookout’ list, or BOLO, borrowing jargon used by police,” wrote Goldfarb and Kindy. Who exactly issued the directive for such a list? “The list soon included 40 groups, including 22 with ‘tea party’ in their names.” So, the vast majority on the BOLO list were conservative groups. But historically, liberal groups such as the NAACP and AARP have also used 501(c)(4)s to engage in political activity.

In fact, in a 2010 Los Angeles Times column, largely critical of the Republican use of 501(c)(4) groups, Doyle McManus wrote that while “Democrats have denounced the 501(c)(4) gambit, and they’re right to do so,” they “have been no slouches in finding innovative ways to funnel millions into political campaigning. In 1996, then-President Clinton held dozens of events in the White House to encourage donors to give ‘soft money’ to Democratic causes. In 2004, Democrats were way ahead in setting up ‘independent expenditure’ committees (known by another section of the tax law, 527) to enable millionaires to donate unlimited money for TV commercials.” He also pointed out that Obama loyalists David Axelrod and Robert Gibbs have run campaigns in which they were able to avoid disclosing the donors.

While Obama may continue to claim he had no personal knowledge of the targeting that took place by the IRS, it is now clear that his White House counsel and chief-of-staff did, well before it was purposely leaked out on May 10th. But what is also clear is that based on signals coming from the White House and top Democrats on Capitol Hill, the “lower-level” IRS operatives had good reason to believe they were carrying out the wishes of the White House.